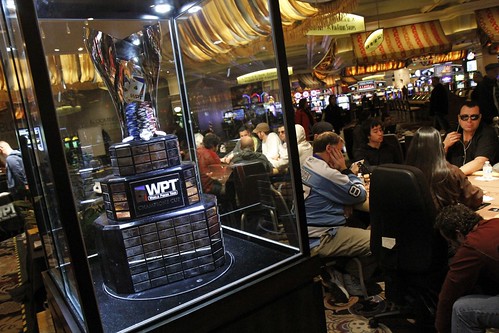 The WPT Champions Cup travels with the World Poker Tour, and the base is engraved with the name of every WPT champion from all 10 seasons. Whoever wins this event will have their name added, and receive a slightly smaller WPT Champions Trophy to keep. 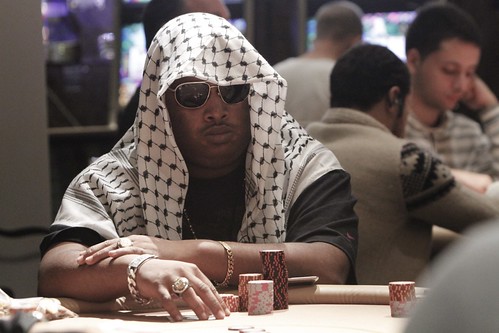 Dwyte Pilgrim was sporting a different look today than we’re used to, but it worked out well for him, because he finished in the top 25 of the chip counts with 181,000. 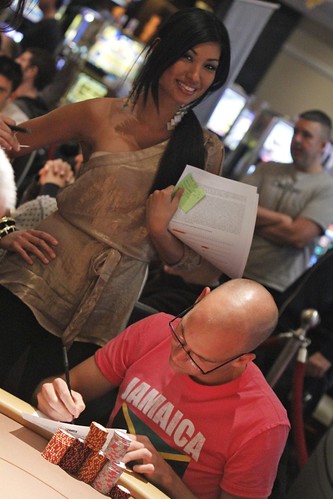 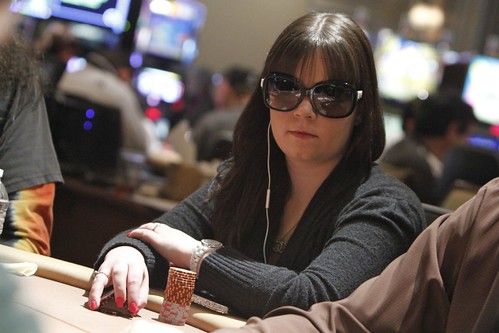 Annette Obrestad, who won the 2007 WSOP Europe Main Event when she was 18 years old, would like to add a WPT title to her resume. She finished the day with an above-average stack of 142,200. 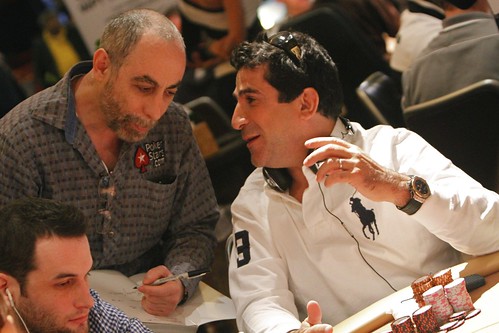 Barry Greenstein signs a copy of his book, "Ace on the River," for Robert Nahmani (right), who eliminated him on Day 2. After a flop of [AsJd7d], Greenstein was short-stacked and got it all in with [AhKd] (pair of aces) against Nahmani’s [Ac7c] (two pair). This pot moved Nahmani into the chip lead for a brief period in the middle of the day. 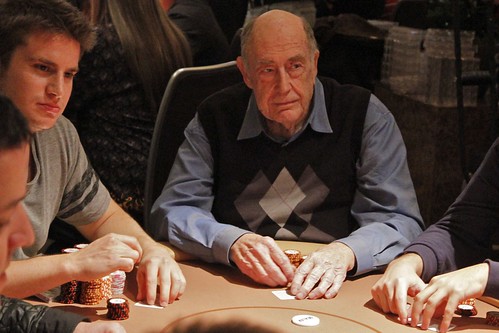 Doyle Brunson was one of the last players to register for the event, which reached a total field size of 413 players. Several years ago, the Bellagio began honoring Brunson by naming one of their WPT tournaments after him — this is the WPT Doyle Brunson Five Diamond World Poker Classic. 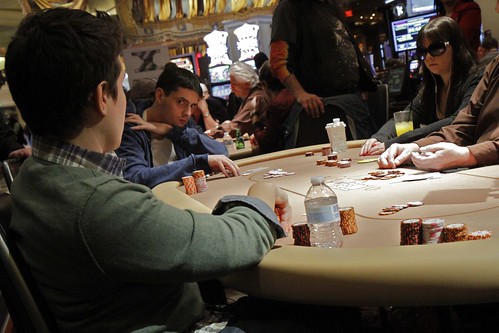 A big three-way pot occurred in the middle of the day between Vanessa Selbst (left), Mark Newhouse (center), and Annette Obrestad (right).

Selbst eventually folded, but Newhouse called with [AhKc] for top pair, top kicker. Obrestad turned over [AcQc] for the flush draw — which she would catch on the river to more than double up in chips. 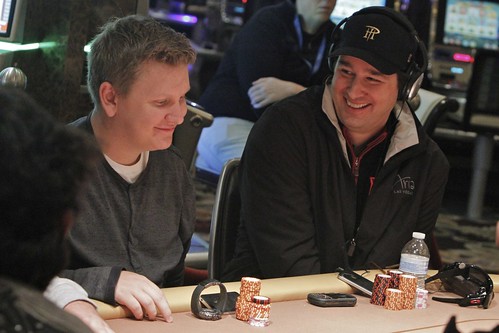 Ben Lamb (left) and Phil Hellmuth were among the last few players to register for this event, and they found themselves seated side-by-side. Both players had incredible performances at this year’s WSOP, and they finished first and second in the WSOP Player of the Year standings.

Lamb won the WSOP Player of the Year title by winning a WSOP bracelet, finishing second in another event, and finishing third in the WSOP Main Event. Hellmuth had one of the best performances possible without winning a bracelet — three second-place finishes.

The World Poker Tour, however, is a different story. This is Lamb’s eighth WPT event, but he is still looking for his first cash. And while Hellmuth has more than $1.1 million in WPT earnings and four televised WPT final tables to his credit, he has yet to win a WPT title — one of the few accolades missing from Hellmuth’s tournament resume. 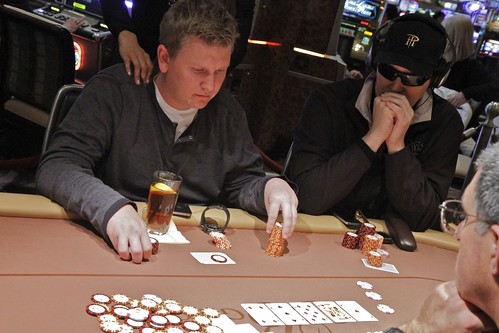 It wasn’t all laughs and good times for Ben Lamb (left) and Phil Hellmuth. They battled over a board of [8d4d3sKhAh], and Hellmuth wound up winning the pot with [Ad3d] for two pair.

Hellmuth would finish the day with 73,700, looking for his first WPT title, while Lamb would bust a short while later, still in search of his first WPT cash. 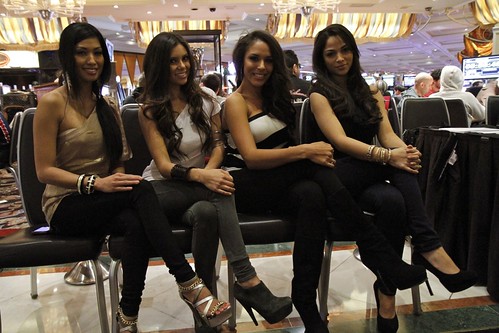 The Royal Flush Girls "guard" the entrance to the tournament area out on the casino floor. From left to right: Ivy Teves, Danielle Ruiz, Brittany Bell, and Angelique Velez. 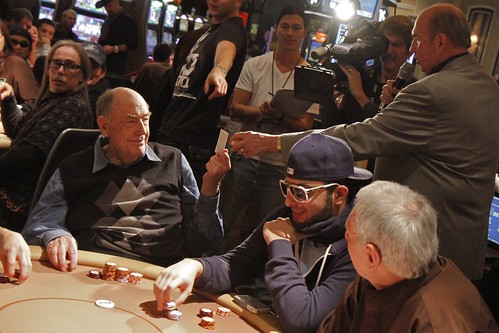 Shortly before the end of the day, Bellagio Tournament Director Jack McClelland (standing, right) asked Doyle Brunson to draw a card to determine how many hands would end the day. Brunson pulled a deuce, and each table would play two more hands. 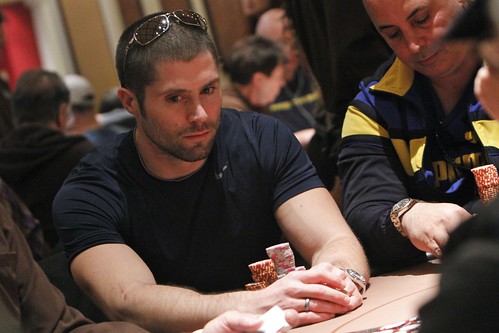 Scott Clements finished the day third in chips with 330,100, and earned a lot of those chips in a hand that coolered Chris Klodnicki. They got it all in after a flop of 9-9-8, and Clements had 10-9 (trip nines) to Klodnicki’s 8-8 (full house, eights full of nines).

The turn was the case 8, giving Klodnicki quads, but …

The river was the case 9, giving Clements slightly higher quads to win the pot. Ouch. 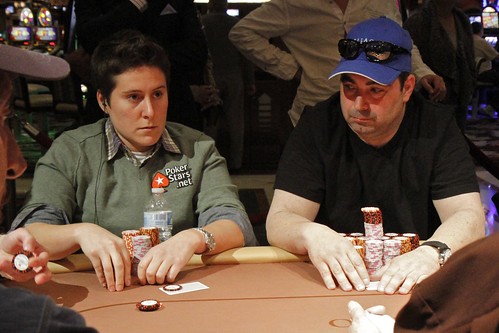 Day 1 chipleader Vanessa Selbst (left) didn’t fare as well on Day 2, finishing with slightly fewer chips than she started with — but she is still above average with 148,000.

She was seated right next to Grant Lang (right), who carries the chipleader title into Day 3 with 382,000. Lang was also named the ClubWPT Player of the Day — click here to see his interview with Jessica Welman.

When registration finally closed in the middle of Day 2, there were 413 players registered, creating a total prizepool that is slightly more than $4 million. The top 100 players will finish in the money, with a first prize worth $821,612.

Day 2 came to an end with 149 players remaining, and an average chip count around 111,000. Here’s a look at the chipleaders heading into Day 3:

Day 3 begins Thursday at 12:00 noon PT, and the field will play another five 90-minutes levels with no dinner break. The top 100 players will finish in the money, so the money bubble will almost certainly burst on Day 3.