Here’s a look back at some highlights from the first two days of the WPT Doyle Brunson Five Diamond World Poker Classic. 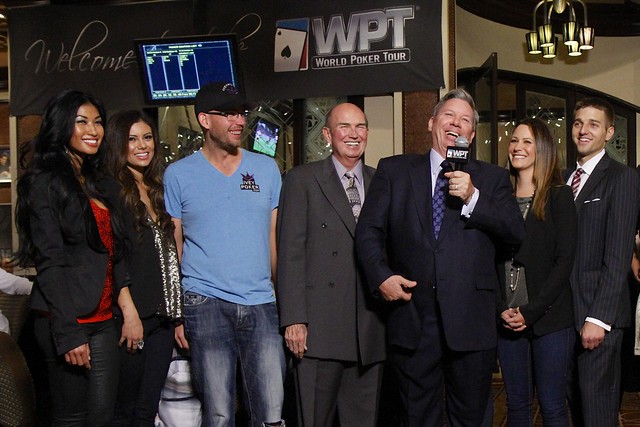 Defending champion James Dempsey (in light blue) joins Mike Sexton, TD Jack McClelland, and the rest of the WPT talent as they welcome players to Bellagio and give the traditional "Shuffle up and deal." 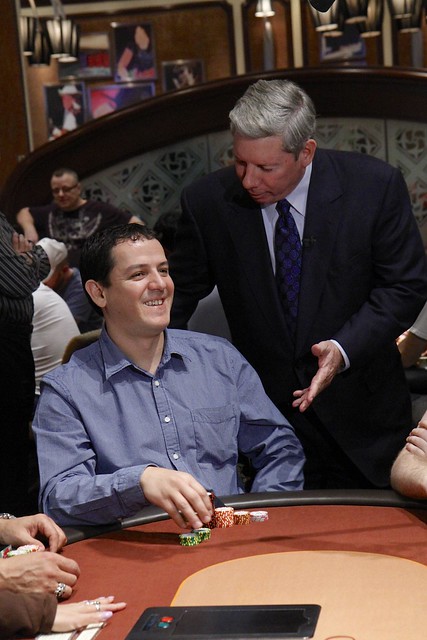 At the start of play, WPT Commentator Mike Sexton (standing) walks thru the field to welcome the players and check out some of the action. Here, he chats with three-time WPT winner Carlos Mortensen.

Unlike last year, this year’s event offered unlimited rebuys during the registration period, which extended thru the first eight levels. So players who busted had the option of re-entering with a fresh starting stack of chips all the way until 5:00 pm on Day 2.

Last year’s tournament attracted 413 players, but with the re-entry format, this year the field grew to 503 entrants. The prizepool hasn’t been released yet, but first prize is expected to be about $1.3 million. 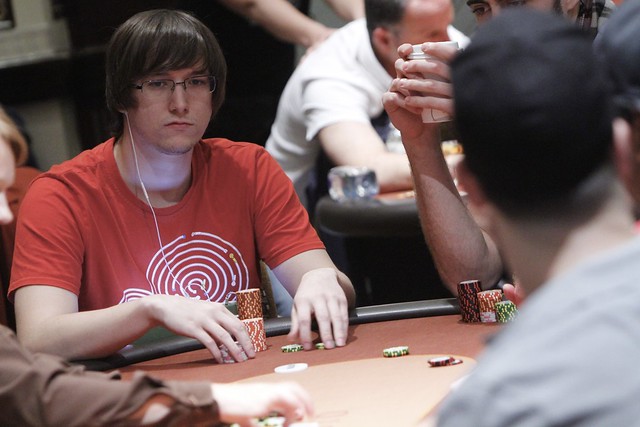 Two-time WPT winner Randal Flowers was among the early chipleaders on Day 1. Flowers entered the tournament only one time, and heads into Day 3 with an above-average chip count of 96,500. 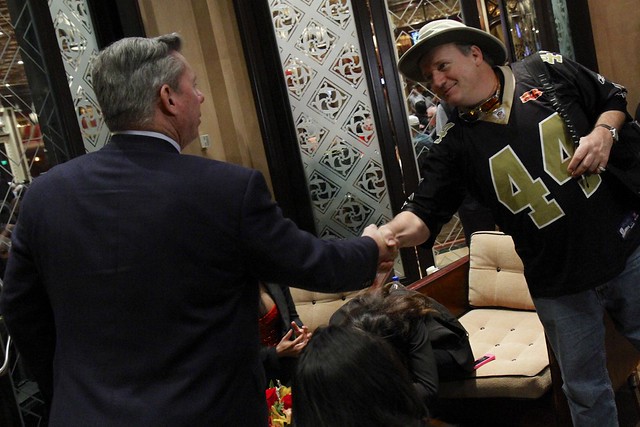 On Day 1, there was a meet-and-greet session for fans to interact with Mike Sexton and the Royal Flush Girls, held inside the high-limit area known as "Bobby’s Room." 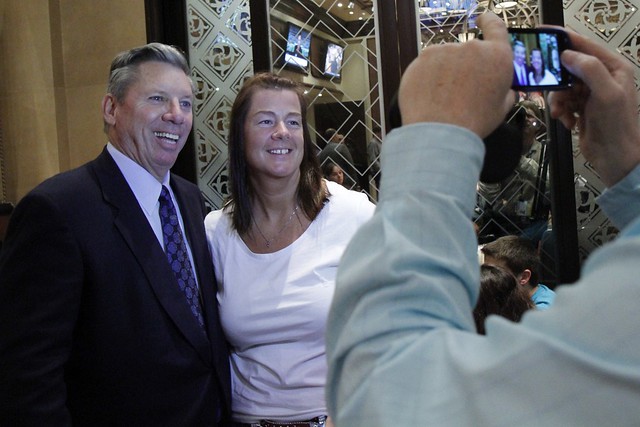 Mike Sexton poses for a photo with a fan. Sexton and the Royal Flush Girls were also giving out autographed photos. 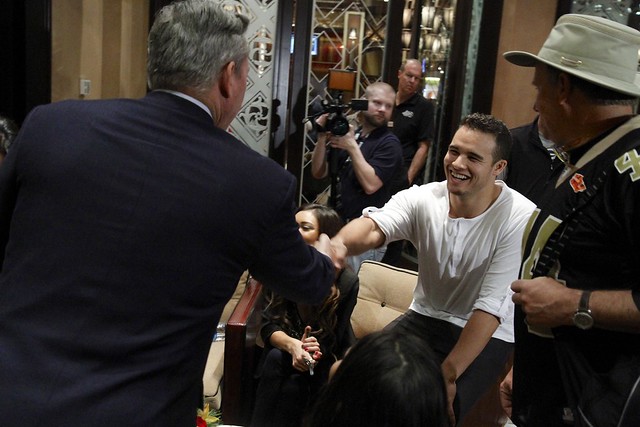 Even members of the WPT Champions Club can be fans. Taylor von Kriegenbergh, who earned $1.1 million for winning the 2011 WPT Seminole Hard Rock Showdown, was just as excited to talk to Mike Sexton as the other fans. 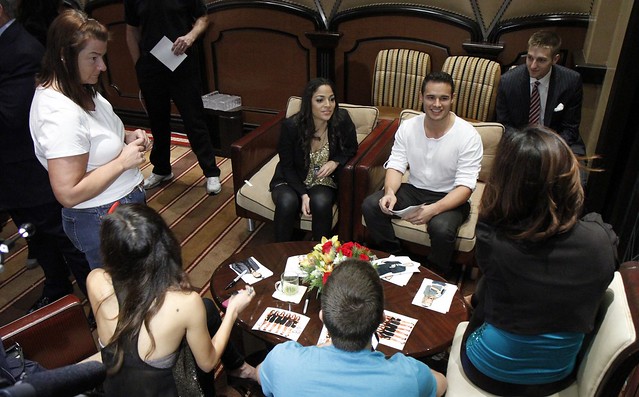 Like Mike Sexton, the Royal Flush Girls were interacting with the fans, taking photos, and signing autographs in "Bobby’s Room." 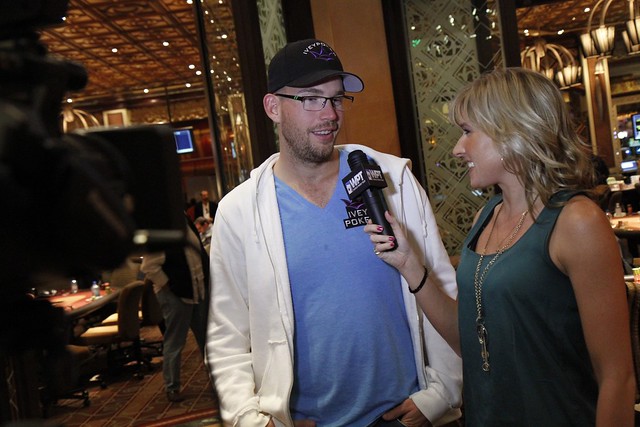 WPT Reporter Diana Cox interviewed defending champion James Dempsey during one of the breaks. Dempsey survived thru the registration period on one entry, but he was eliminated late on Day 2. 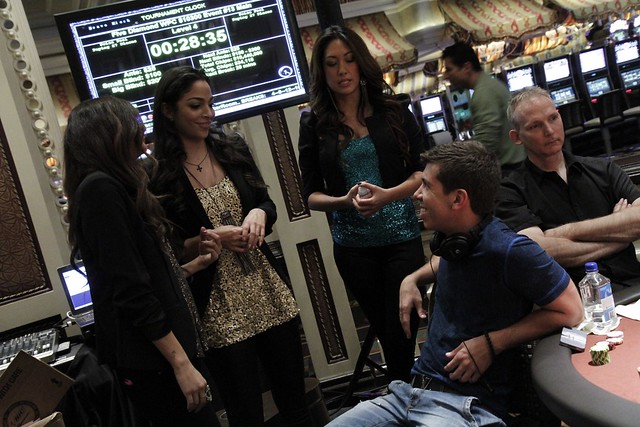 In addition to interacting with the fans, the Royal Flush Girls (left to right: Danielle Ruiz, Angelique Velez, and Jeannie Duffy) also interact with the players, such as Darryll Fish. 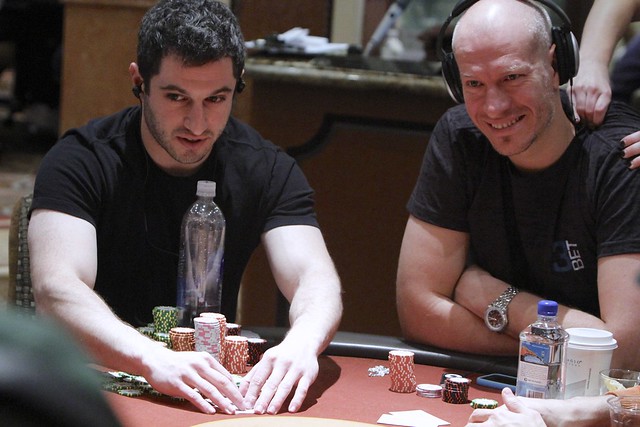 Greg "FBT" Mueller (right) watches as Phil Galfond pulls in a pot to pass the 200,000 mark and take the chip lead early on Day 2. Galfond kept his chips in non-standard stacks, and didn’t want to count them. He didn’t even know he was chipleader until he was interviewed by Diana Cox on the next break.

Galfond was in for two entries, while Mueller was in for only one. Both players are in strong shape heading into Day 3 — Mueller with 137,700 in chips, and Galfond with 179,300. 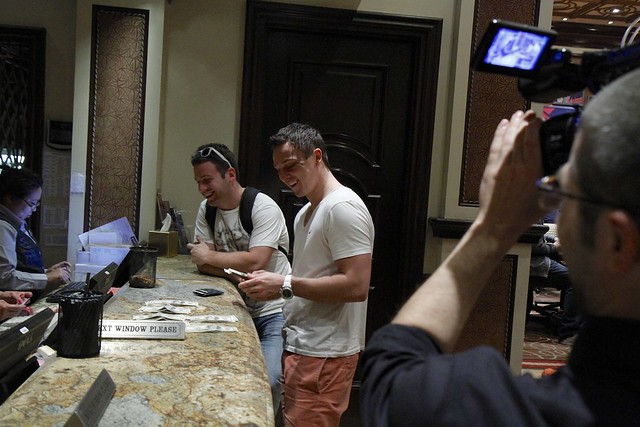 Unfortunately, the strategy didn’t work for either one of them, as they both busted late on Day 2. 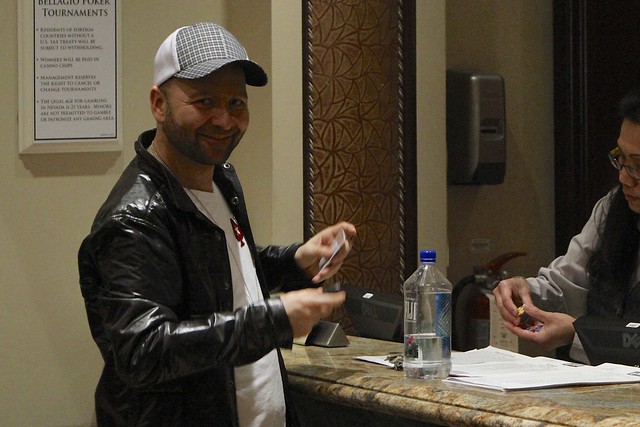 It may not be a shock to those that know them but Daniel Negreanu was the king of re-entries, one of just three players who bought in six times. Unfortunately, the $61,800 investment didn’t pay any dividends for Negreanu, as he eventually busted for the sixth time after registration closed on Day 2.

The other two players who bought in six times — who shall remain anonymous for now — are both still alive in the tournament. 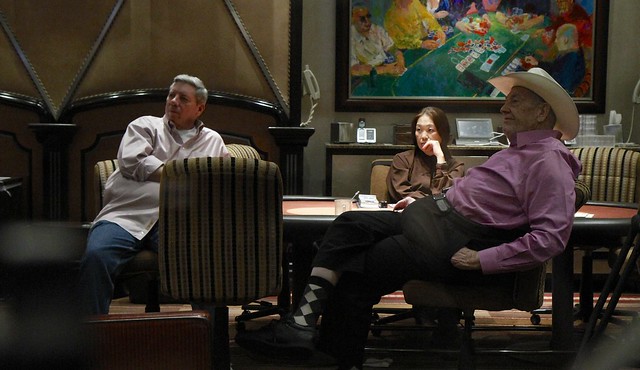 Mike Sexton (left) sits in Bobby’s Room with the legendary Doyle Brunson as they wait for a big cash game to start on Day 2. While this tournament is named in Brunson’s honor, he has been playing far fewer tournaments recently, preferring to focus on the high-stakes cash games. 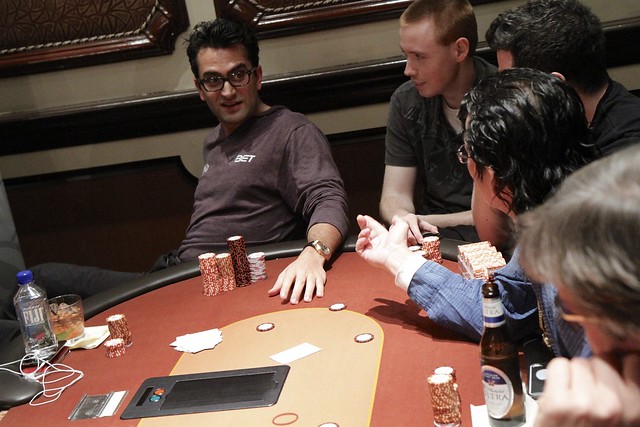 With 10 minutes left at the end of Day 2, Antonio Esfandiari (center) was asked to select a random card to determine how many hands each table would play to end the day. Esfandiari chose the card face down, and then asked Scotty Nguyen (right) to flip it over.

Why was Esfandiari chosen for this honor? Well, this event may be named in honor of Doyle Brunson, but Esfandiari has owned it in recent years, winning it two years ago, and final tabling it again last year. 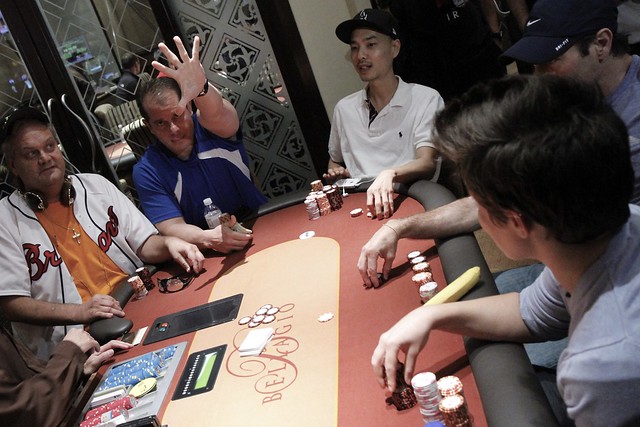 As he usually does, Will Failla (center) organized a side bet among players to guess the number of hands that would be played at the end of the day. Each player puts in $100, and whoever picked the right number wins it all.

As you can see, Failla picked five — and he won the money. The card that Esfandiari had selected was the [5s]. 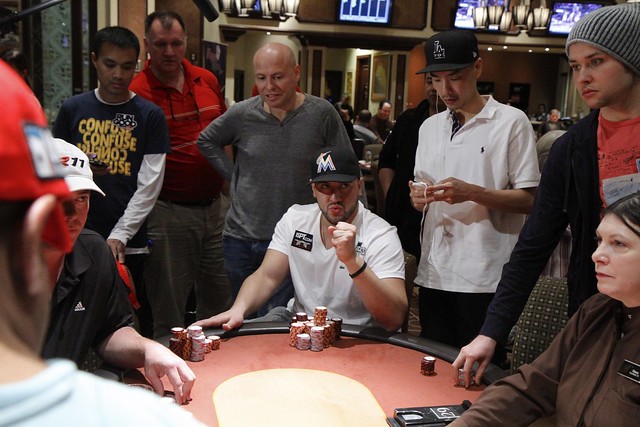 In the final minutes of Day 2, it became clear that the chipleader would be two-time WPT winner Michael Mizrachi. Mizrachi only bought in one time, but so far, he has made the most of it. 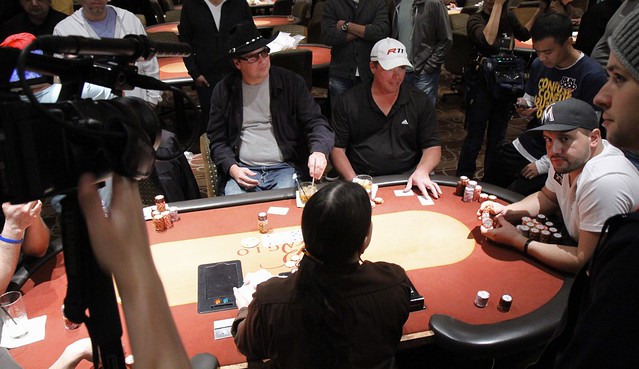 At the same table, Kenna James (center, in the black cowboy hat) moves all in on the final hand, and a crowd gathers around as most of the other tables had finished. James’s opponent eventually folded, giving James the victory in the last hand of the night.

Kenna James still has an uphill climb ahead of him on Day 3, as he finished with 32,900 — a little more than a third of an average stack. 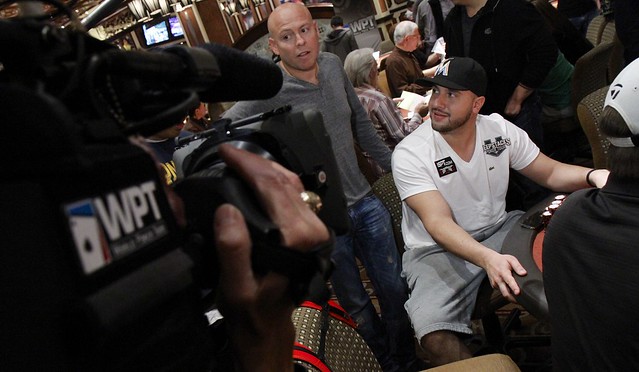 When play finally ends, the WPT cameras converge on chipleader Michael Mizrachi to get his reactions for the TV show.

With 166 players remaining, only the top 54 will finish in the money. (The prizepool has yet to be announced, but first prize should be around $1.3 million.) Here’s a look at the leaderboard heading into Day 3:

Day 3 begins Thursday at 12:00 noon PT. Stay tuned to WPT.com for live coverage and chip counts throughout the day.