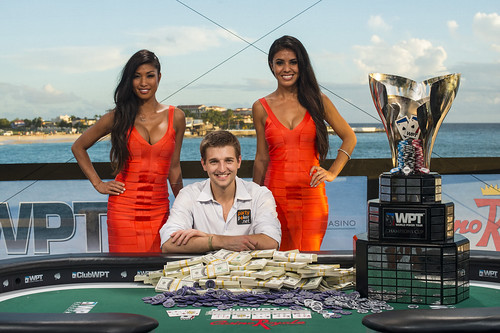 Tony Dunst has the unique perspective of hosting the World Poker Tour segment The Raw Deal where he breaks down hands strategy-wise from final tables on the tour. Dunst is also a member of the WPT Champions Club and he earned a spot in that exclusive club with a victory here at the WPT Caribbean stop last November. He won $145,000 as the champion of that event here in St. Maarten.

Dunst has now appeared at three WPT final tables. He also finished fifth in the WPT Jacksonville bestbet Open during Season X, and Dunst recently took third place at the WPT World Championship at the end of Season XII. He has his most consistent success at the Five Diamond World Poker Classic at Bellagio in Las Vegas. Dunst has a pair of cashes there and each was good for over $30,000. He has played in 45 WPT events over the years and he has cashed in six of them (13.3 percent cash rate). Here is a look at his history of results on the tour.