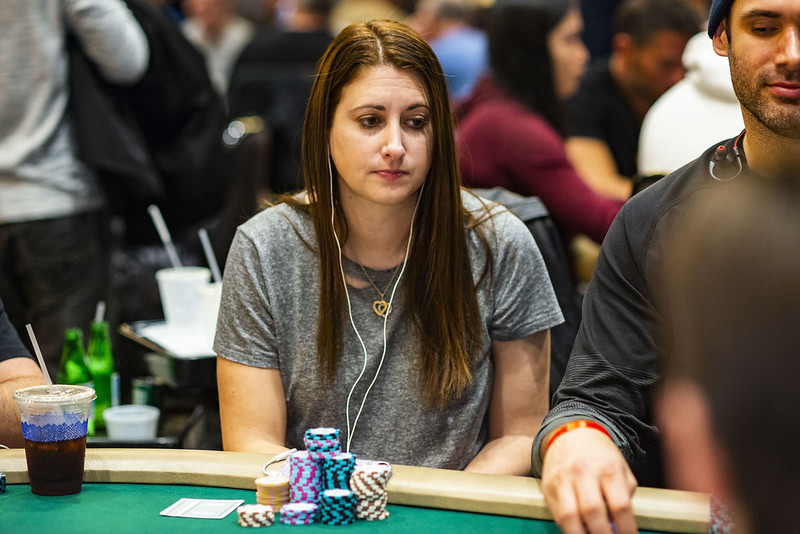 The buy-in for the WPT Gardens may be $10,000, but Nicole Schwartz brings a chip stack into Day 2 after qualifying for the event by winning a $100 charity event.

The Gardens hosted a charity poker event on Jan 12 to benefit Breast Cancer Angels, an organization that provides housing assistance, transportation, food, utility payments, social worker services, and more for those going through treatment. The event raised more than $10,000 and awarded a buy-in to the winner with Schwartz coming out on top.

“That was fun to play,” she says of the event. “I feel like because it was only $100 and it went for a good cause, everyone was just happy to be there. It was a fun tournament and everyone was talking.”

Cocktails were served, but Schwartz didn’t imbibe, possibly to her benefit. With some nice play and a nice run of cards, Schwartz was able to parlay only two buy-ins into the title without even an add-on.

“The cards just fell in the right place and I won every toss-up hand,” she says. “I didn’t take the add-on because at that point I was like, ‘I have no chips, this is silly. I’m never going to win this.’”

Instead, just before the break she went all in and lost that hand. She went fired an additional bullet for a total of $200 and that was it. When the tournament restarted, she rallied and took home the WPT Gardens buy-in.

Schwartz and her husband have two children, and she plays poker a couple times a month here at the Gardens recreationally. The $3-$5 No Limit Hold’em game is her usual stakes at the property.

While she plays cash games more, Schwartz is no stranger to poker success and has more than $35,000 in live tournament winnings. The 37-year-old from Wilmington, Delaware, scored her second cash in the World Series of Poker Ladies Championship last summer, finishing 44th out of 718 players for $2,647. She notched the biggest cash of her career in 2016 in the same event for $13,443.

“I would love to play more tournaments, but it’s just time-consuming,” she says.

Schwartz was taught the game by her father and feels like she’s always been playing. Her dad pitched in on Day 1 bringing her food and talking strategy and about hands on breaks.

While she normally doesn’t play tournaments, Schwartz is giving it her best shot. Day 2, began with a bit of a roller coaster. She entered with a stack of about 30,500 but quickly dropped to 8,000. But then just as quickly spun that back up to 30,000 again and by the first break in the day was up to 68,000.

“I’m doing okay,” she said. “These are some really tough players.”

Her Day 1 table serves as an example of that assessment. Schwartz was at the same table as 2018 Main Event winner John Cynn. What was it like playing with the champ?

“He’s actually very nice,” she says and notes that she even won a few pots off of him. “That was very exciting. I don’t normally get to play against players at that level.”

With some sharp play and a little luck, Schwarz is hoping to work her way into Day 3 and continue her tournament heater.