MJ Gonzales and Bill Perkins have announced a new prop bet – and it’s a wild one.

Poker players have been known to make some of the most outlandish prop bets in order to test themselves or prove their mettle both on and away from the poker table. From spending a month in a pitch-black bathroom, to playing four consecutive rounds of golf in the blistering Las Vegas summer sun, if there’s a test of wills and a line to be made, you can bet that poker players will find a way to wager on it.

And that includes getting in the ring. The latest wild prop bet to be announced popped up over the weekend on Twitter where high-stakes poker pro and one of the founders of Hybrid Poker, MJ Gonzales is set to get in the ring with his former student and well-known booker of bet in Bill “The Businessman” Perkins.

Only there’s a massive catch: Perkins, who stands at 6’1”, must fight the entire time…from his knees.

Have a new prop bet with @bp22

Gonzales, who currently stands at 5’10”, ~170 lbs, can move and maneuver as he sees fit while Perkins will have to use his knees in order to be nimble. According to the thread, there’s no headgear included and the pair are set to use standard-sized gloves as well. It’ll be a maximum 12-round battle at 2 minutes per round.

If you think it sounds like Perkins is at a big-time disadvantage, you’re not alone. Even Perkins thinks he is probably taking the worst of it.

On the other hand, Perkins is, by just about any measure, in very good physical shape to try to take on this challenge.

Today was measurement day for my Body fat bet and I smashed it at 7.9% !!????????. Maintenance time! #Health #Fitness #painful #GimmeDaLoot pic.twitter.com/mtWpdU6aYV

There in the bet lies. Can the physical stature of Perkins withstand the hindrance of not being able to be as mobile as his opponent? Of course, when a prop bet this wild is announced #pokertwitter has opinions. 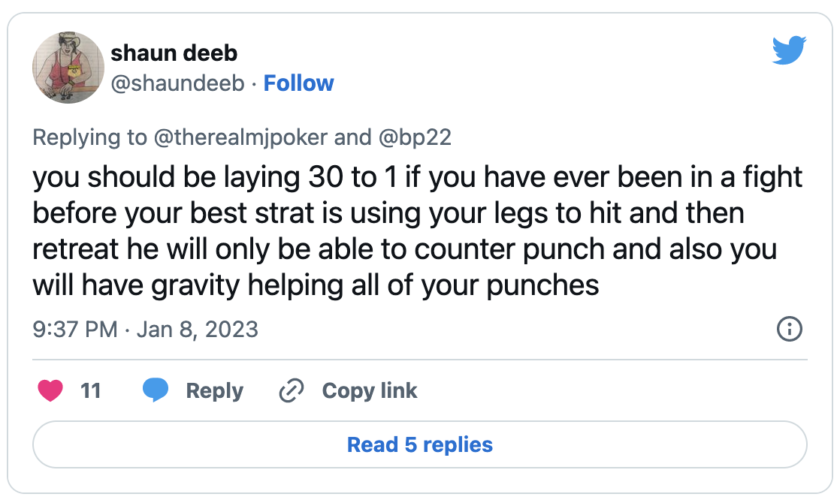 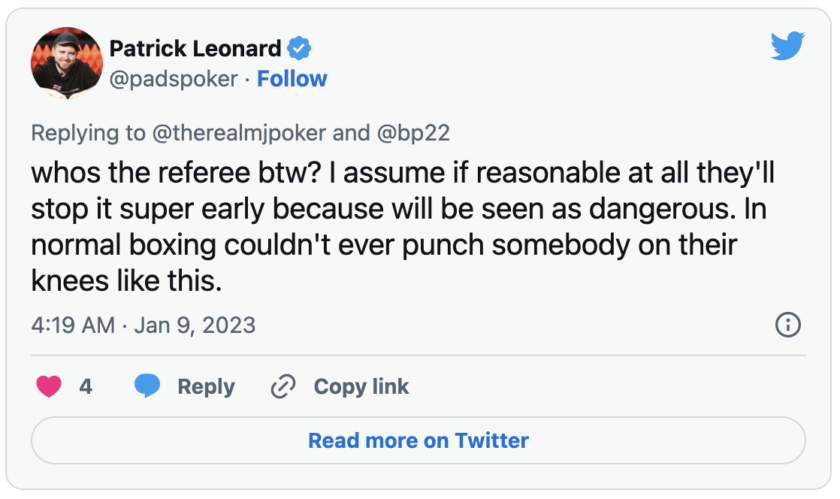 The when and where of this off-kilter battle has yet to be announced, but if/when it takes place it will undoubtedly take it’s place in the pantheon of poker fights thet includes Lex Veldhuis vs. Bertrand ‘ElkY’ Grospellier, Olivier Busquet vs. Alvarado, Sorel Mizzi vs. Brian Rast, and even Antonion Esfandiari vs. Kevin Hart.

German pro Philipp Gruissem has a shiny new trophy and £862,400 ($1,379,840) new reasons to be happy as the first-ever, WPT Alpha8 London champion. With 20 entrants putting up £100,000 each, WPT Alpha8 attracted some of the biggest names in business and poker to London’s Palm Beach Casino for this exclusive event. The televised final table, which…

) Two things become very clear when watching the premiere of WPT Alpha8: The players in this exclusive, $100,000 event are enjoying their time at the tables The fact that they’re having fun doesn’t mean they aren’t all playing their “A” games To see what we mean, check out the hand above between professional player…