Just a couple of weeks back my wife told me some interesting news. It was time for me to redecorate my office. 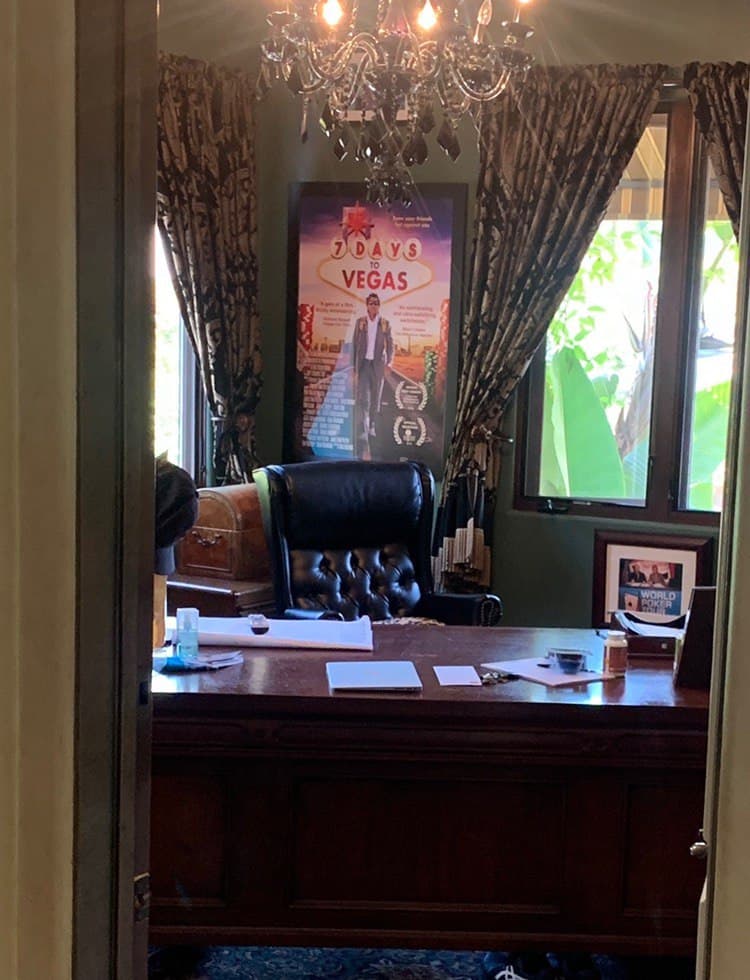 Strange I thought, I really love my office. I love the green colors, the bookcase the brown trim, big desk. It’s always suited me quite well. I’ve spent wonderful hours in there, writing, creating, and hiding. But she brought up a valuable point. That after seventeen years of the same colors, dramatic velvet drapes, etc, it was starting to look like the haunted mansion at Disneyland. I needed to change it up. I love my wife and respect her opinion, so l rolled with the punch and said “OK whatever we have to do!”

She convinced me that the green pea soup Excorcist color on the walls was not working. 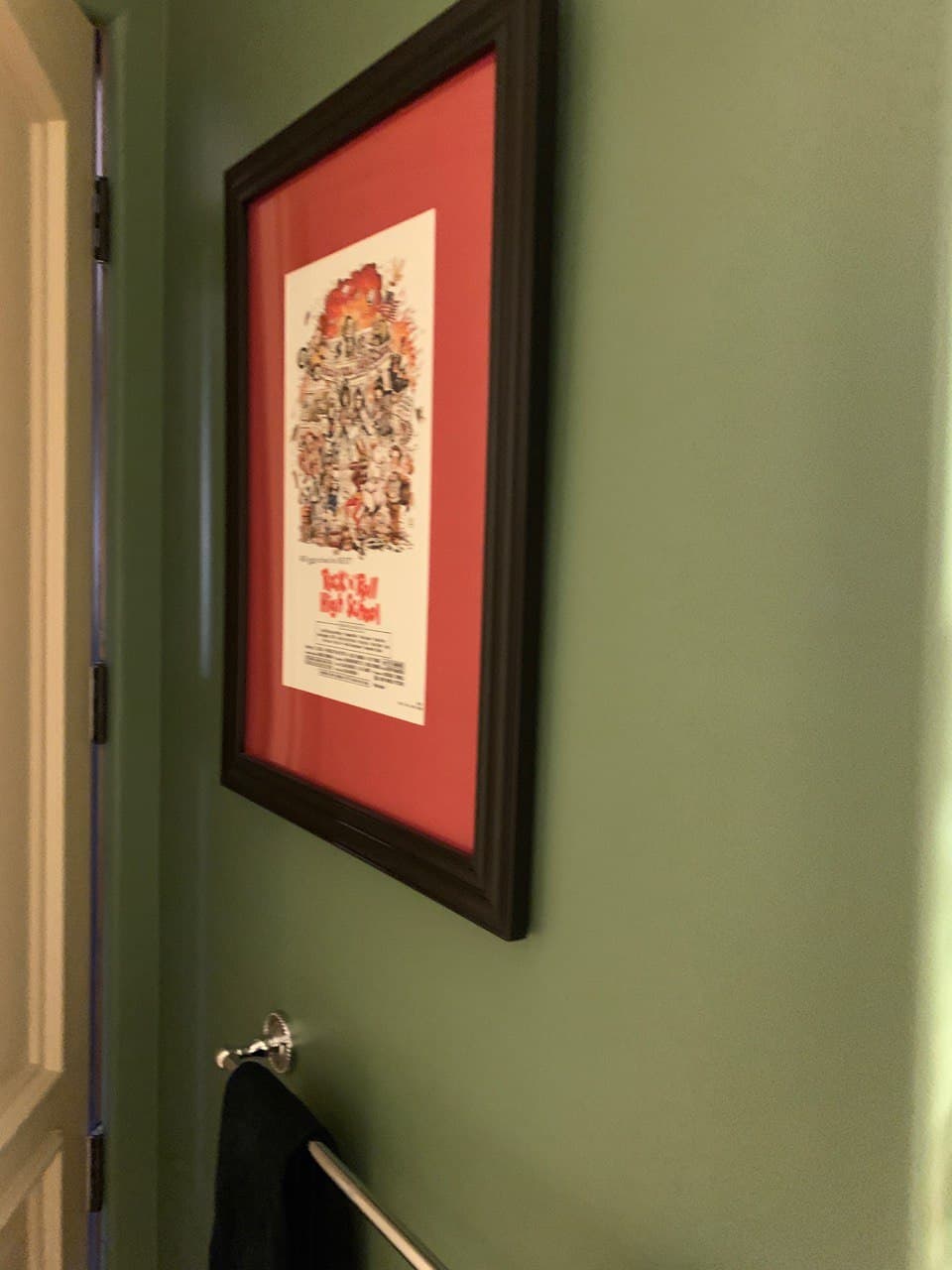 We should probably go lighter, “open it up.”

So I acquiesced and picked out a white I thought was suitable.

I did my homework and I found there are sixty-five different color whites to choose from, each one a little more confusing than the next.

But after seven intense, debilitating hours of discussion, we narrowed it down to two or three potential whites. We called our painter/handyman/ “50 bucks an hour Joel” to commit to doing the job!

So that’s the first step!!  Repainting the office an off-color white, and then we could address other things such as shades,  shutters, divorce lawyers at a later time.

It was all set. We’re going on a road trip with the family to Flagstaff, Arizona and Joel would paint it while we were gone! Simple enough.

But something happened that was kind of interesting in the interim before we left. We got creative and got rid of the big brown desk!

Then we brought in a temporary, smaller desk from underneath the house that we’d paint at a later time. Then my lovely wife boldly said, “let’s get it in there now and see what it’s going to look like, it will be exciting!” So I obliged.

Well, this is what happens when you don’t wait for Joel, a “50 bucks an hour” handyman to help with the heavy moving. 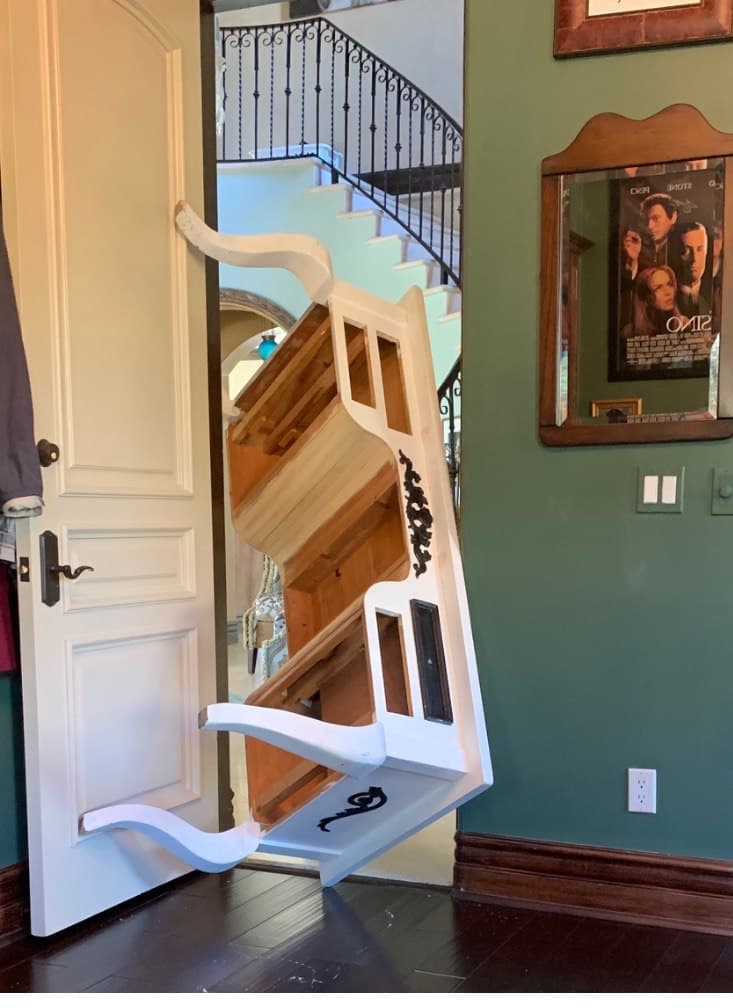 Yes, it got stuck!! Ok, make fun of us, we deserve it! It stayed that way for two days until “50 bucks an hour Joel” came back, took the door off, and shoved it into the room.

Not bad right? (A  little Liberace right now I’ll admit) but we’ll definitely paint it black at a later time. I’ll let you know in a couple of months what the final look looks like. In the meantime,  play loose and always bluff on the river!!