BLOG: What Did Tony Dunst Do Against a River Shove at WPT Rolling Thunder? 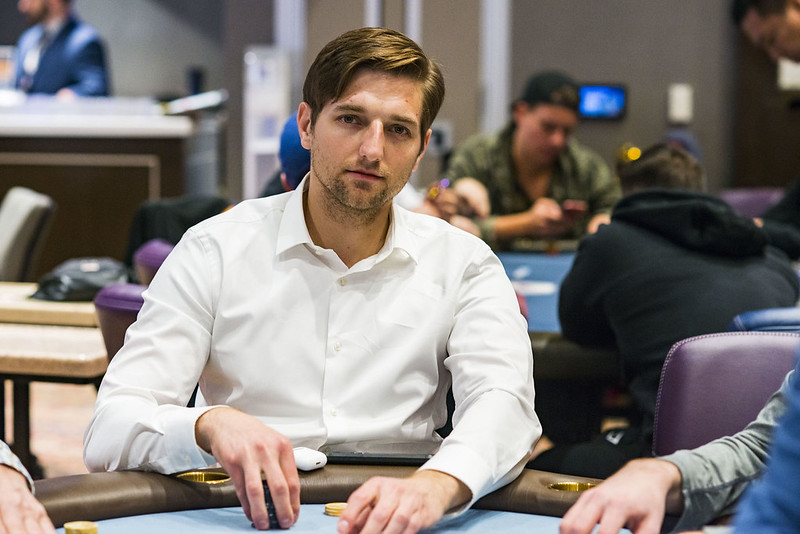 I finished Day 1 of WPT Rolling Thunder among the chip leaders and was disappointed to find a table full of familiar faces waiting for me on Day 2. One of those faces belonged to Tyler Patterson, who put me in a tough river spot in the first hand we played together.

Instead, the opener folded, and Tyler called in position, leading to a Queen-5-4 rainbow flop.

As with most decision points these days, I randomized my choice and drew a passive number, so I checked to Tyler. He bet 4,000, and I made the call with my top pair.

I checked when the turn brought a 6 that completed the rainbow, and now Tyler bet 15,000. I called once more, and checked a third time when the river brought a jack. I expected Tyler to bet but I was surprised by the size; all-in for over 70,000 about one and a half times the size of the pot.

If we’d been playing with time-bank chips, I would’ve tossed one out immediately.

By checking the flop my hand looked a little under-represented, but I also thought Tyler gave me credit for being able to check strong hands some percent of the time—whether with top set or one of the over-pairs.

I also figured Tyler knew that pocket jacks were one of the most likely hands to take my line…and after I’ve called twice in a three-bet pot, there aren’t that many medium-strength hands he can put me on.

Even worse, it’s difficult to find bluffs in Tyler’s range…the most plausible ones have showdown value, like

. He can have all of the flopped sets (though queens are unlikely), and might even go for this sizing on the river with the two combos of queen-jack suited that were remaining.

Ultimately, I decided there were too many value combos and not enough bluffs in Tyler’s range, and slid my ace-queen towards the muck. I never found out if he had it, but my real regret was forgetting to fold for the rest of the day.

Want to see your name on the WPT Champions Cup? Check out more advanced tournament poker strategy to gain the tools to become a WPT Champion on LearnWPT.com.