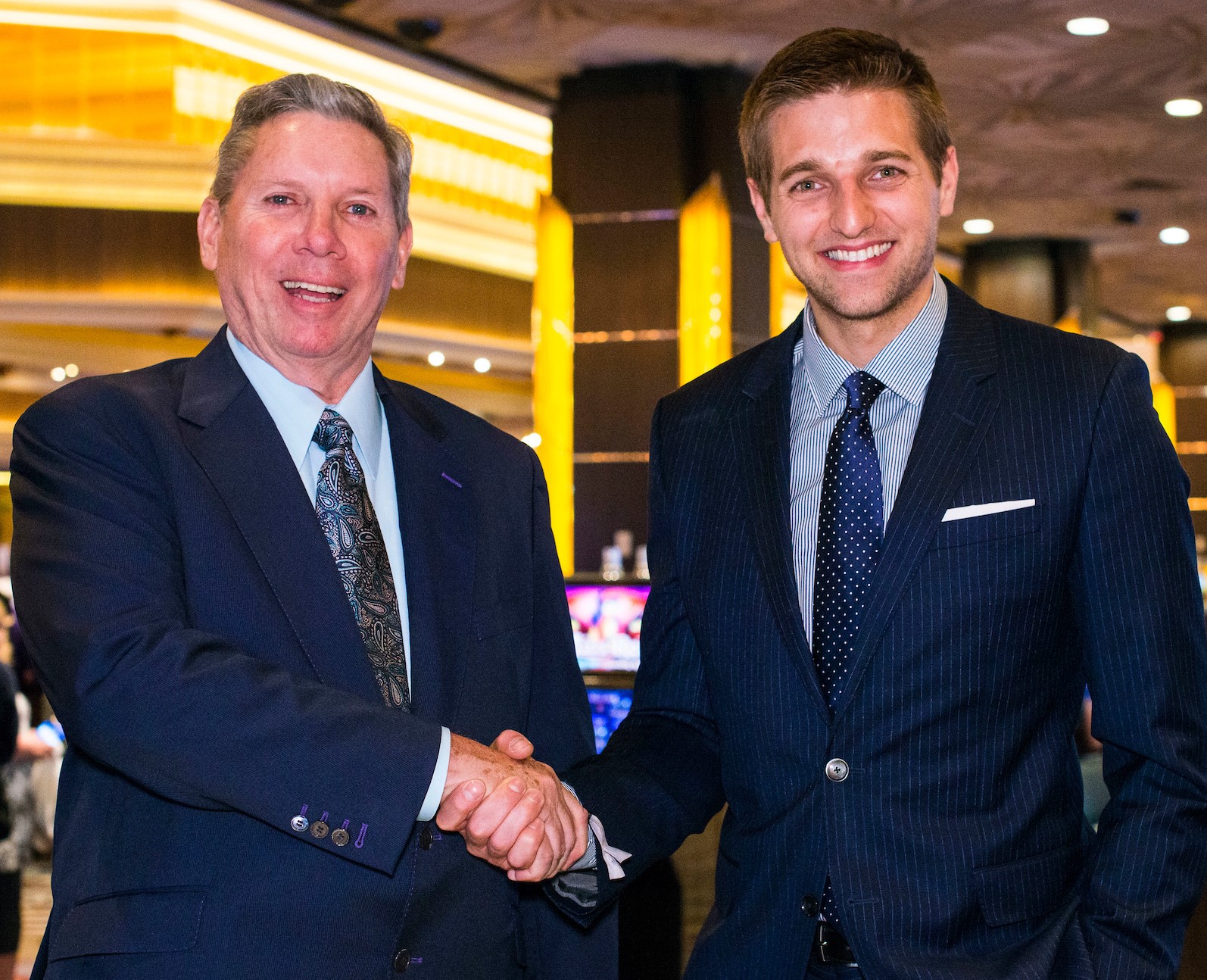 Torch Passes from One WPT® Champion to Another

Los Angeles, CA (May 22, 2017) – World Poker Tour® today announced that Mike Sexton, co-commentator of the WPT® for the past 15 seasons alongside Vince Van Patten, will retire from his role in the booth. Tony Dunst, fellow WPT Champions Club member and host of the WPT Raw Deal for the last seven years, will fill Mike’s seat starting with WPT Choctaw, the first televised event of Season XVI.

Sexton says farewell to the WPT after a historic Season XV that saw him earn his way into the prestigious WPT Champions Club. The Poker Hall of Fame inductee will now forever be eligible to compete in the WPT Tournament of Champions, an event he helped create.

“It has been an honor and a privilege to work with the World Poker Tour since its inception in 2002,” Mike Sexton said in a statement. “When the World Poker Tour launched, it was a dream come true, and to be there from the beginning and see how the WPT changed the poker world forever by essentially turning poker into a televised sport has been amazing. And to do it all this time with my co-commentator from day one, Vince Van Patten, has made it even more special. Fifteen years later, another dream of mine came true when I won my first WPT title, and I now have the opportunity to play in the exclusive WPT Tournament of Champions for years to come. It’s been quite a ride over these 15 seasons, and one that I’ve been extremely blessed to take. I’d like to thank Steve Lipscomb for his vision to create the World Poker Tour, Adam Pliska for bringing the WPT to incredible heights, and the entire WPT family for all they do and have given me. I’d like to mention everyone, but there’s simply too many to name. They know who they are, and without them, the WPT wouldn’t have become what it is today.”

WPT CEO Adam Pliska stated: “Today is a bittersweet day in WPT history. As we announce the end of Mike Sexton’s incredible tenure as WPT co-commentator, the World Poker Tour celebrates the internal promotion of Tony Dunst to one of poker’s most visible positions. Mike, along with Vince Van Patten, is more than just a part of one of the longest-running commentating pairs in sports broadcast history. His graciousness, enthusiasm, passion, and genuine spirit are emblematic of all we have wished the World Poker Tour to be. In short, Mike has made us a better company. For years, we knew that this day would come, and the WPT is immensely grateful that Mike stuck it out for 15 years of nonstop travel and devoted work to the benefit of all of his colleagues. Mike will forever be a cherished member of the WPT family, and his impact will forever shape the core of this company and the entire industry.”

“While I have substituted for Mike and Vince several times over the years, getting the call to take a position in the WPT commentary booth full time is an incredible opportunity,” said Tony Dunst. “Mike Sexton set the standard for what it means to be an ambassador, and the positive impact he had on my career and the broader poker community cannot be overstated. I’m honored to be taking his seat in the booth next to the legendary Vince Van Patten; and while I intend to bring my own style to the position, Mike will be a lasting inspiration for how I carry myself and treat people within poker. The success and popularity of the World Poker Tour are the result of the culture he created here.”

In describing Dunst’s promotion, Pliska added: “We always knew it would be Tony elevated into the position. Brought on originally to reflect the new generation of players, Tony’s command of the WPT Raw Deal segment quickly made him one of the most recognized faces in the industry. His incredible dedication to the analytics of poker, non-affected style, and biting wit helped the WPT see increased ratings as he resonated so well with the WPT’s expanding audience. The WPT is well known for its loyalty to its own, it’s a special honor for us to welcome Tony to the commentary booth to carry on a legacy.”

Dunst joined the World Poker Tour as host of the WPT Raw Deal during Season IX after winning the role through an open casting competition that included some of poker’s most recognizable faces. During his time as host, Dunst appeared in 140 WPT Raw Deal segments.

In addition to joining the WPT Champions Club in 2013 during Season XII of the World Poker Tour, Dunst has appeared at five WPT final tables, traveled the globe playing in the world’s most competitive poker tournaments, and written extensively about the game.

Since Dunst began with the World Poker Tour, the WPT has expanded from 14 to more than 60 locations around the world, and his relatable approach has helped usher in a wider audience.

“Tony has become a friend over the years, and I have increasingly come to admire his talent and dedication,” said Vince Van Patten, WPT co-commentator. “Tony’s knowledge of the game was highly evident during WPT Raw Deal segments and occasions when he joined Mike or me in the booth, and it is without question that his commentary will elevate World Poker Tour broadcasts. It is my pleasure to welcome Tony into the booth full time, and I look forward to another great partnership starting with Season XVI.”

Sexton will take an executive role at partypoker, where he has had a longstanding relationship.

Dunst’s new role as a full-time WPT co-commentator will officially begin during the televised Season XVI WPT Choctaw in August 2017. The World Poker Tour has not yet finalized a replacement for Dunst as host of the WPT Raw Deal segment.

About World Poker Tour
World Poker Tour (WPT) is the premier name in internationally televised gaming and entertainment with brand presence in land-based tournaments, television, online, and mobile. Leading innovation in the sport of poker since 2002, WPT ignited the global poker boom with the creation of a unique television show based on a series of high-stakes poker tournaments. WPT has broadcast globally in more than 150 countries and territories, and is currently producing its 15th season, which airs on FOX Sports Regional Networks in the United States. Season XV of WPT is sponsored by ClubWPT.com and PlayWPT.com. ClubWPT.com is a unique online membership site that offers inside access to the WPT, as well as a sweepstakes-based poker club available in 35 states across the United States. PlayWPT.com is a social gaming platform offering free-to-play poker and slots with innovative features and state-of-the-art creative elements inspired by WPT’s 15 years of experience in gaming entertainment. WPT also participates in strategic brand license, partnership, and sponsorship opportunities. WPT Enterprises Inc. is a subsidiary of Ourgame International Holdings, Ltd. For more information, go to WPT.com.