Things got “mental” in the $25K High Roller as Ethan “Rampage” Poker earned a career-high score. 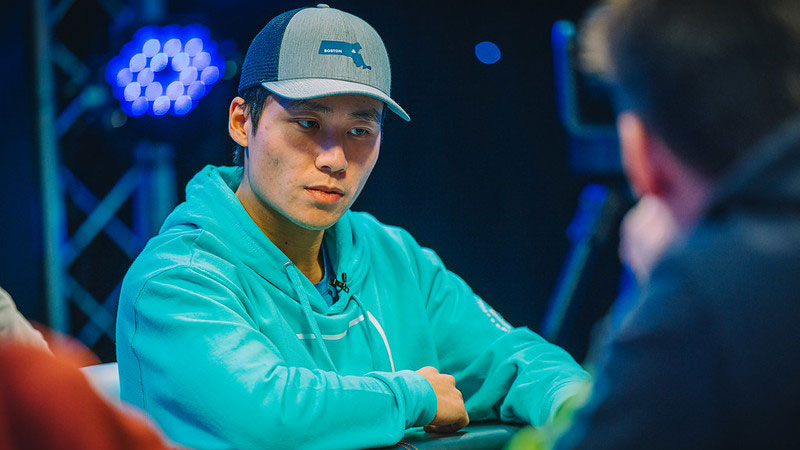 Long after Day 1A of the WPT World Championship concluded for the day, and well past the time that the final table of the massive WPT Prime Championship was set, the final four players in the $25,700 High Roller battled it out deep into the night.

In the end, after nearly 14 hours of play, Ethan ‘Rampage’ Yau, a well-known poker content creator, outlasted the field and picked up the $894,240 first-place prize. The score quickly became his largest career victory and pushed his tournament total earnings over the $1.5 million mark – not bad for someone who dove headfirst into the game just a few years ago.

The $25K High Roller was just another example of the gravitational pull of the WPT World Championship. The field swelled to 108 runners, a massive number by all accounts.

Prior to the start of the event, before he decided to play it himself, Yau took to Twitter to ask the question if the event would hit the 100-entry mark. A field size Daniel Negreanu said would be “mental.” 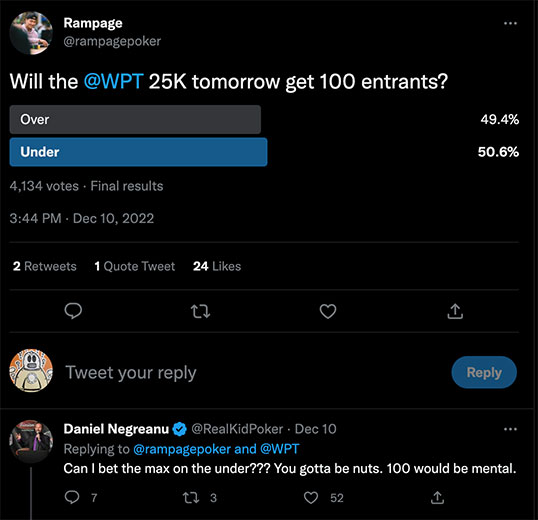 Well, things got mental in a hurry as elite talent – both local and international – pushed the prize pool to $2.7 million. A look around the Wynn Poker Room (where the starting day was held) saw the likes of Mikita Badziakouski, Brian Hastings, Hendrik Hecklen, WSOP Main Event champ Espen Jorstad, Jason Koon, and Nick Schulman among many other notables.

The two-day event saw just 18 players return with 11 players making their way into the money for a $72,900 min-cash. Something Yau didn’t even think he was going to reach.

Finally, the final nine came together on the livestreamed final table on the stage of the Encore Ballroom and the grind began. Justin Saliba (9th, $81,000) and Justin Zaki (8th, $92,880) fell early in the broadcast and were followed by Tobias Schwecht (7th, $109,890), the first player of the event to walk with a six-figure score.

Aram Oganyan reached a career-high score with their sixth-place $133,920 finish, while four-time WSOP bracelet winner Ben Yu’s fifth-place result of $168,750 is his largest since October 2021. Yu now sits with more than $8.7 million in total earnings.

At the start of heads-up play, Yau had roughly a three-to-one chip lead over Kevin Rabichow. it took under an hour for the pair to get all the chips in the middle. With the blinds at 150k/300k (300k bb ante) Yau moved all in with the

and Rabichow called for it all holding the

. The board got a little sweaty when the turn brought Rabichow a spade draw to the river however, in the end, it was Yau’s night. Rabichow finished as the runner-up for 518,940 and Yau took a major leap forward in his career with his $894,240 first-place prize.

This Sunday, ClubWPT.com is offering members the chance to win a $25,500 seat into the WPT World Championship at Bellagio in May. The stakes do not get any higher than this! You’ve seen the stories of ClubWPT.com qualifiers reaching the final table of WPT Main Events (like Artie Rodriguez at WPT Jacksonville for example) and…

In less than 10 days, the WPT World Championship kicks-off at the  Bellagio in Las Vegas. As one of poker’s most prestigious events, the WPT Season X finale is set to attract the game’s top professionals and create a massive prize pool. Before this event gets underway, the WPT Blog has decided to take a…