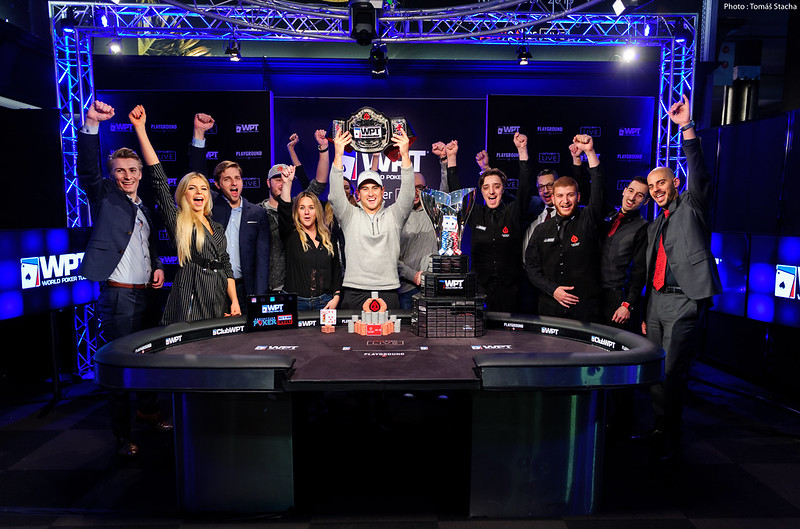 Dreams are full of making the final day of a World Poker Tour Main Event, but it can soon become a nightmare when you look at your surrounding competition and see over $58 million in lifetime tournament earnings that include a World Champion, WSOP bracelets, and WPT titles.

For Halifax, Nova Scotia, native Geoffrey Hum who moved to Toronto, Ontario, in 2016, his dreams of becoming a WPT Champions Club member were solidified after overcoming one of the toughest final day fields the World Poker Tour has seen in a long time.

“Playing against such a tough field is probably something I’ve learned a lot from,” Hum said, “Yesterday was such a crazy day where I started with 380,000 and I got aces and kings four times in one orbit, which really catapulted me.”

Speaking about the final day of play, Hum said, “It was somewhat smooth sailing, and obviously got lucky picking up aces against Kristen’s kings, and then got lucky versus Joe with the eights versus jacks when it was three-handed. You need that to win tournaments.”

The 30-year-old doesn’t regard himself as a professional poker player and plans to keep his full-time job.

“I wish my boss would give me the time off,” Hum laughed, “I love coming to Montreal because it’s close to Toronto.”

Heading into the final day of play, just 10 players remained from the 1,109 entrant Season XVIII WPT Montreal Main Event. As part of the WPT Montreal Festival in partnership with partypoker LIVE, anticipation would be high to see who would follow in the footsteps of Patrick Serda to be crowned the WPT Montreal champion.

and ran into Mike Watson’s

. Watson flopped a queen, and although Sagle turned a gutshot, he would be eliminated in tenth place for a CA$43,000 payday.

With the final nine players redrawing to one table, WPT Champions Club member Mike Leah would be eliminated in ninth when his

. The final board ran out

to see Ajayi connect with two pair on the river to leave the tournament down to eight as Leah collected CA$53,000 in prize money.

Shortly after Leah’s elimination, Michael Robar would shove with his pocket tens and be looked up by Ajayi’s pocket sixes. A six on the river would send Robar to the rail in seventh place for CA$67,000 in prize money. Kelly Minkin would be eliminated in seventh place for CA$85,000 when she shoved with a suited ace but would be unable to outdraw Watson’s pair as the final six players headed to the WPT Montreal final table of six players which would be live streamed. 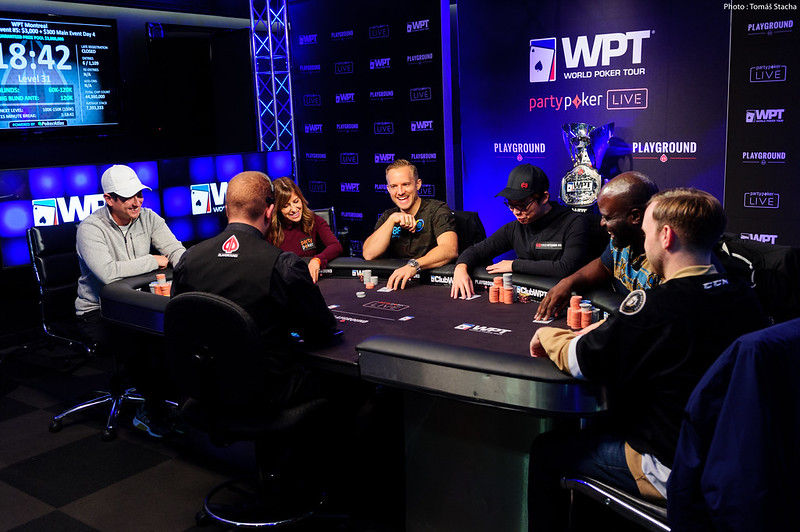 Joseph Cheong entered the day as chip leader and remained in that place once action resumed, but immediately it would be Ajayi taking top spot in the first few hands under the bright lights of the feature table. 2014 World Champion Martin Jacobson entered the final table as one of the short stacks, and would be the first one out in sixth place when his shove with

would be looked up by Ajayi holding

. A jack on the turn followed by a queen on the river would see Jacobson collect CA$110,000 for his efforts of making his third WPT final table.

One of three partypoker members to finish in-the-money along with Mike Sexton and Jeff Gross, Kristen Bicknell was the sole partypoker flag bearer at the final. In a hand that saw Hum five-bet shove preflop from the big blind, Bicknell called all in from under the gun holding kings to be trailing Hum’s aces. No help came for Bicknell, and she was eliminated in fifth place for CA$140,000. With Hum and Ajayi tied for the chip lead when play resumed after break, WPT Champions Club member Watson found himself all in holding

runout saw Watson turn a Broadway straight, but Hum would river a flush to send Watson out in fourth place for CA$180,000 as WPT Montreal was down to three players.

Action sped up between the final three as both Hum and Ajayi alternated as chip leaders. Cheong managed to find two doubles, one by holding with top pair, and the other by turning a flush. However, once the final three players returned from break, Cheong would be all in holding pocket jacks against Hum’s pocket eights. An eight on the flop would seal the deal for Cheong as he was eliminated in third place for CA$235,290 as Hum entered heads-up play with a slight lead over Ajayi.

On the eighth hand of heads-up play, both players would see a

flop. Ajayi continued with a bet and Hum check-raised. Ajayi three-bets before Hum shoved all in. Ajayi took a moment, and then called all-in tabling his

to be at a severe disadvantage to Hum’s

. A heart on the turn ended Ajayi’s run in second place for CA$335,000 in prize money – his biggest career score. 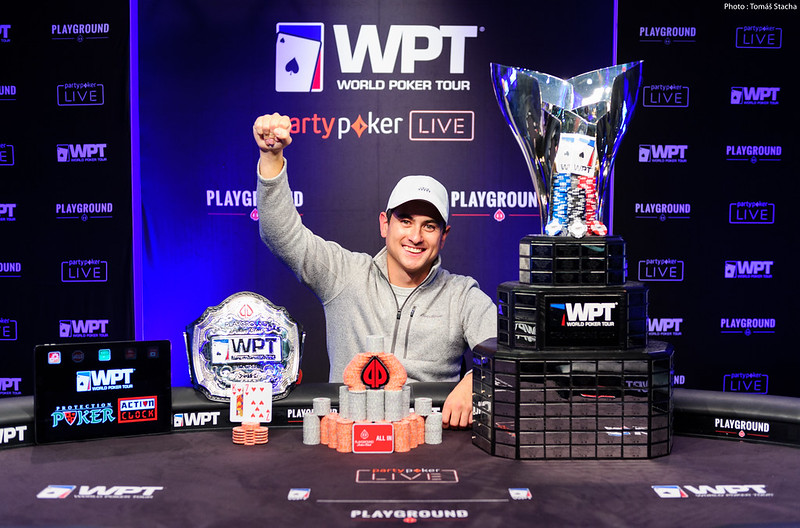 “It’s awesome,” Hum said, “I’m not a pro by any means, so to come here for a few days and to have this result is obviously not expected, but it’s pretty sweet.

It’s kind of my first big win in any kind of poker tournament,” Hum continued, “It feels awesome!”

Before winning WPT Montreal, Hum had just over $51,000 in lifetime tournament earnings that included a WPT500 Montreal cash last year, and a WPT Montreal Main Event cash in Season XV. Now he has a WPT Montreal title and Playground Championship Belt he can add to the trophy case. In terms of the Hublot WPT Player of the Year race, Hum is now sitting in outright third place with 1,200 points trailing WPT Borgata Poker Open champion Donald Maloney with 1,250 points and WPT Legends of Poker champion Aaron Van Blarcum with 1,275 points. 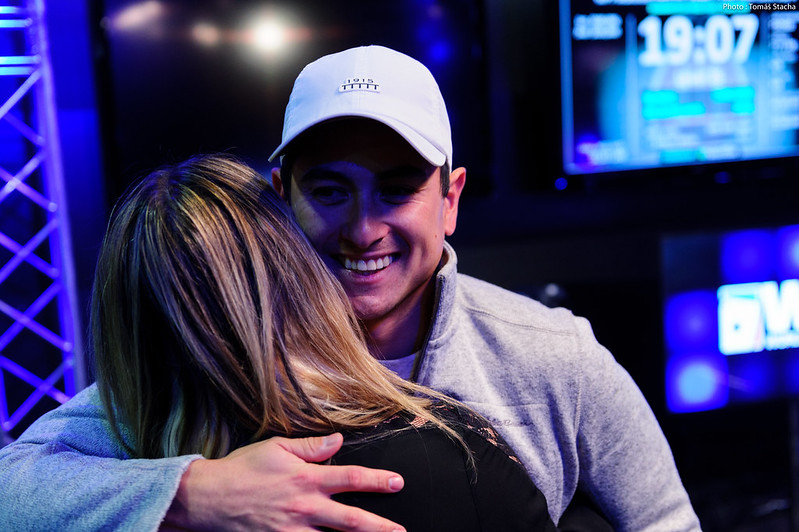 It’s awesome to be a WPT champion. You look at some of these big names that won WPTs, and I’m not nearly as good as them,” Hum said, “I totally understand that you have to run hot for four days to win a tournament like this, and I’m happy my run good came here.

Up Next for the World Poker Tour is the Season XVIII WPT Seminole Rock ‘N’ Roll Poker Open from November 29 – December 4, 2019.