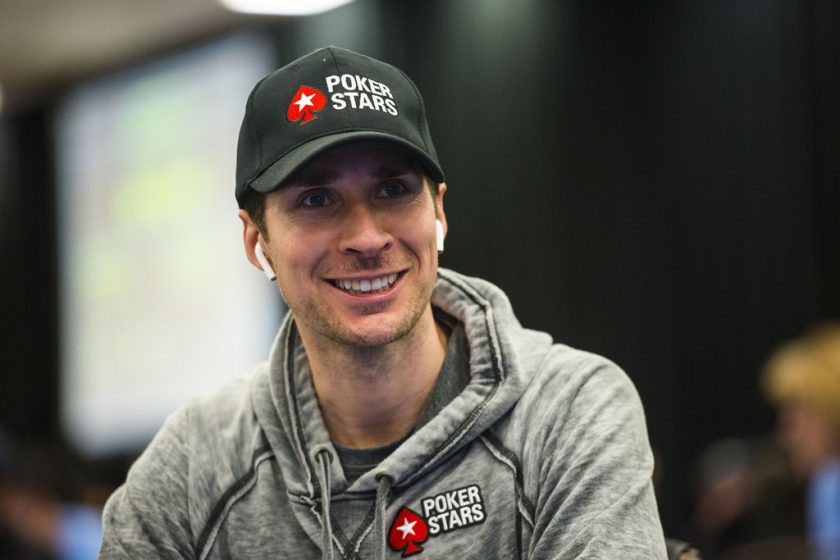 Backpacks line the behinds of chairs throughout the Hard Rock Event Center during the WPT Seminole Hard Rock Poker Showdown. ClubWPT King of the Club commentator Jeff Gross’ brand of choice is the popular Tumi.

All black, with zippers lining the body, Gross’ bag blends in with the exception of one detail. The top of Gross’ bag can’t zip all the way shut.

Sticking out like a buoy are the legs to the mount for his GoPro. On breaks for the entire event, Gross is creating content with the use of his camera for tens of thousands of followers across all social media platforms.

With vlogging, Gross has taken on a second job to his life as a poker pro.  This is, of course, in addition to his role as commentator for the ClubWPT King of the Club series, alongside Maria Ho. The documentation of the poker journey never stops for Gross, who found himself in a challenging position at Hard Rock.

With almost $700,000 up for grabs, Gross continued to make content for his adoring fans even though it might not have been in his best interest with much to focus on within the tournament. The battle is a welcome one for Gross, who is trying to keep all details on an even keel to ensure equally distributed attention.

Gross was entrenched with content creation deep on Day 3 when WPT.com caught up with him.

“These opportunities are rare when you get super deep and it’s exciting, but also, it’s like, we’re playing for real money,” Gross said. “These are some of the best players in the game and maybe being unalert to every detail or missing a spot could be the difference between final tabling and going out in 20th. I for sure sacrifice some playing ability with the stuff I’m running. It’s one of those things, you either do it or you don’t.”

As soon as the clock hits zero at the end of a level, Gross has his GoPro out to document the latest part of his tournament journey. For Day 3, Gross looked at the tournament clock and then reversed the camera back to himself to go over the last few hours in as much detail as possible.

Gross puts a thorough amount of thought into how he is going to tell the story of each event.

All social media platforms play a role into what Gross decides to do on break or at the table. He might do an Instagram story during a big hand on Day 2 with his phone when on Day 1 it’s a casual selfie at the table. Since starting his vlog two years ago, Gross has worked through a lot of kinks.

“For me, the content is very exciting because, for one, it’s an elaborate journal,” Gross told WPT.com. “There’s the Day 1 journal where you take notes. You have your Instagram stories, your feeds are something you can document and remember. For me, getting vlogs up, it started as let’s see how it goes, but now, it’s like looking back, it’s fun. Looking back on WPTs I’ve done in the past, it’s like, ‘OK, I can go back and remember.’ It’s personally enjoyable, I like the journey. It seems like I’m getting good feedback overall.

The major focus for Gross is having fans at home be able to feel the excitement of the action as he makes a deep tournament run. Gross finished 19th in a field of 1,309 at the WPT Seminole Hard Rock Poker Showdown. He entered Day 3 in 81st place out of 81 remaining players. There was a lot of work needed to climb into championship contention and Gross gladly shared the experience with his viewers.

Gross described what he wants viewers to see by saying, “To have a look at the day-to-day and how a routine works, to hear some of the hand histories, to hear the thought process, to see the table breaks, to see when you register. To get to feel the experience of what a tournament is like to play in is different. There’s not a lot of guys who do that so I think that’s valuable and exciting for a lot of people.”

When at the table, Gross is thinking about content and calls what he does “organic” for the shots he gets with the camera. Gross tries to observe as much of the tournament space as possible but is faced with restrictions.

“Honestly, it’s frustrating to go to do a lot of places and they’re very strict on what you can do,” Gross told WPT.com. “You can’t show the hands or people, and I get it to some degree, but I try to get some cool shots or from the side or show hands on breaks and get chips on break.”

Gross may have come up short in Florida of a final table, but there is always another tournament to register. Wherever Gross ends up next on the World Poker Tour should be an interactive one for his legion of viewers.

Gross was recently involved with the World Poker Tour beyond the felt, in his role as a commentator for the ClubWPT King of the Club series that aired on FOX Sports Regional Networks. Gross commentated alongside Maria Ho in an event that allowed ClubWPT qualifiers the once-in-a-lifetime opportunity to compete on the World Poker Tour stage for more than $30,000 in cash and prizes. The King of the Club series is just one of many promotions from ClubWPT, where poker players can win your way to a World Poker Tour event for a shot at becoming a WPT champion and where eligible VIP Members can play for over $100,000 in cash and prizes each month, no purchase necessary. Play for your chance on ClubWPT.com today!