The $25,500 High Roller Championship played out last night, with over a million for first and seven of the world’s best poker players left in contention. It was a deep-stacked affair with high-level play throughout. In the end, it was a one-two for Team partypoker as Mikita Badziakouski and Jason Koon chopped up the two biggest prizes. Check out our recap of all the action, with two Closer events as the cherry on top.

The high roller final table got underway at 7:05 pm (BST), and it was a sight to behold. With 40-minute levels and almost 160 big blinds for the leader, while the short stack still had 24, this rivaled some of the best final tables in online poker’s history.

partypoker sponsored player Mikita Badziakouski started in the lead with Ali Imsirovic finding himself at the bottom of the pack. Imsirovic still started with a workable stack but lost some early to go out first on the final table eventually. In his final hand, he got it in with ace-king against the jacks of Daniel Rezaei. No pair or other form of salvation appeared for Imsirovic, and the tournament was six-handed.

Aleksei Barkov was the next to go, shoving his last sixteen big blinds in from the small blind with king-five suited. Alexandros Kolonias in the big blind called with pocket sixes and saw that hand hold up.

Despite knocking out Imsirovic, Daniel Rezaei remained short and ended up going out in fifth. Jason Koon was his executioner with king-queen against pocket sixes. Two eights and two jacks on the board counterfeited Rezaei’s sixes, and he received $259,979 for his deep run. 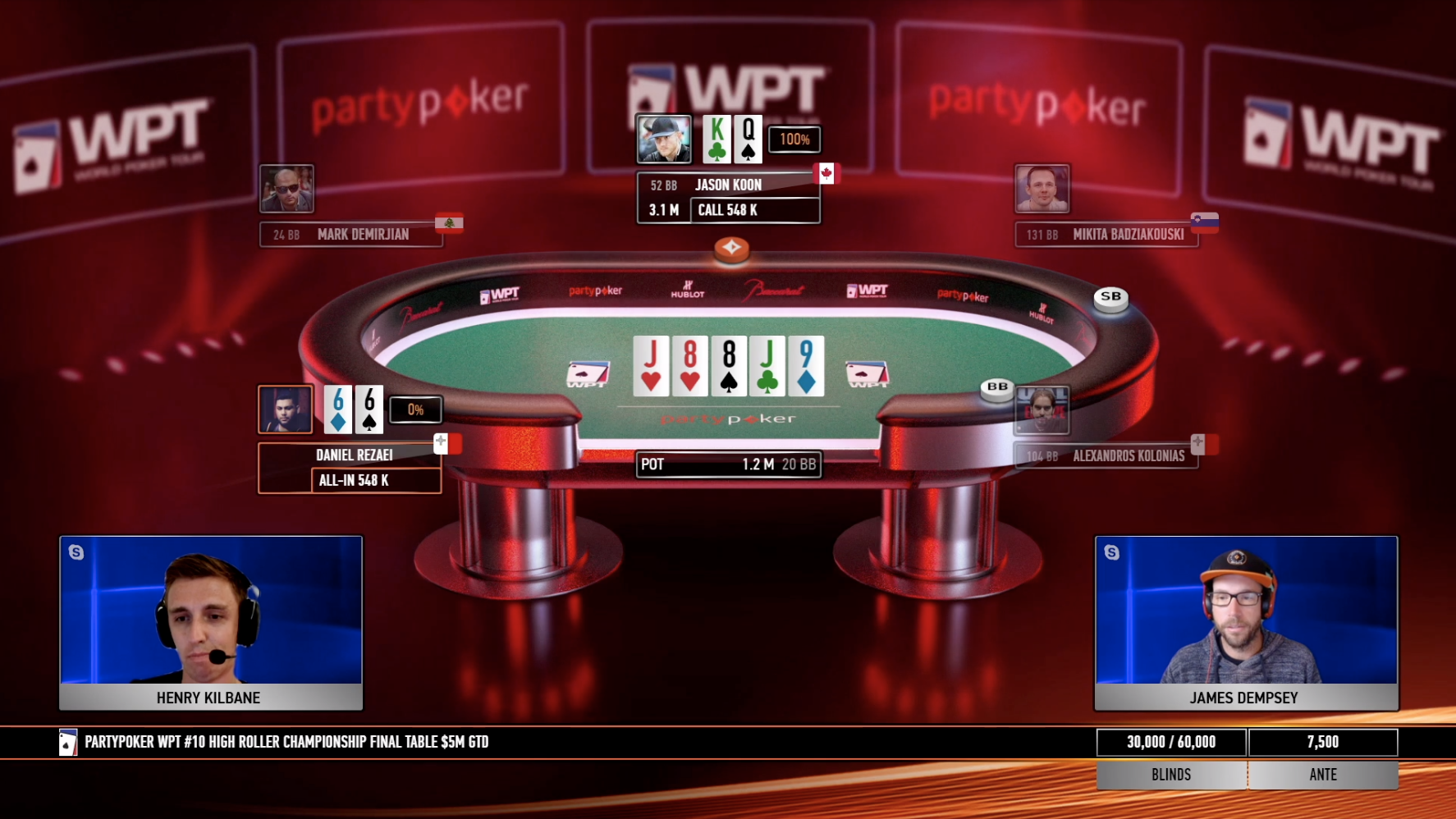 In a single raised pot, Mark Demirjian flopped a pair and open-ended with jack-ten against the middle-set of nines of Mikita Badziakouski. The chips went flying in as Demirjian check-shoved the flop. Badziakouski needed little time calling and saw the board run out running kings to stay in the lead. Demirjian collected $380,652 for his fourth-place finish.

Badziakouski distanced himself from the competition, going into the break with almost fourteen million in chips against three million for both of his opponents.

Jason Koon wasn’t settling, though, and first doubled through Badziakouski before he beat Alexandros Kolonias in an exciting hand. Kolonias limped in with ace-king of spades, and Koon just checked with ace-jack off. An ace-high flop with two spades hit both, but only a single bet went into the middle. Kolonias bet once more when an inconsequential six hit the turn, and Koon smooth called yet again. An offsuit ten on the river saw Kolonias bet a third time, and Koon now raised with his inferior pair of aces. Kolonias folded the best hand, and Koon was up to eight million.

Kolonias and Koon switched places once or twice before the former hit the rail in third place. In his final hand, Kolonias got it in with pocket threes against the pocket aces of Mikita Badziakouski. The Greek player, logging on from Malta, banked $549,793 when the board didn’t improve his hand. 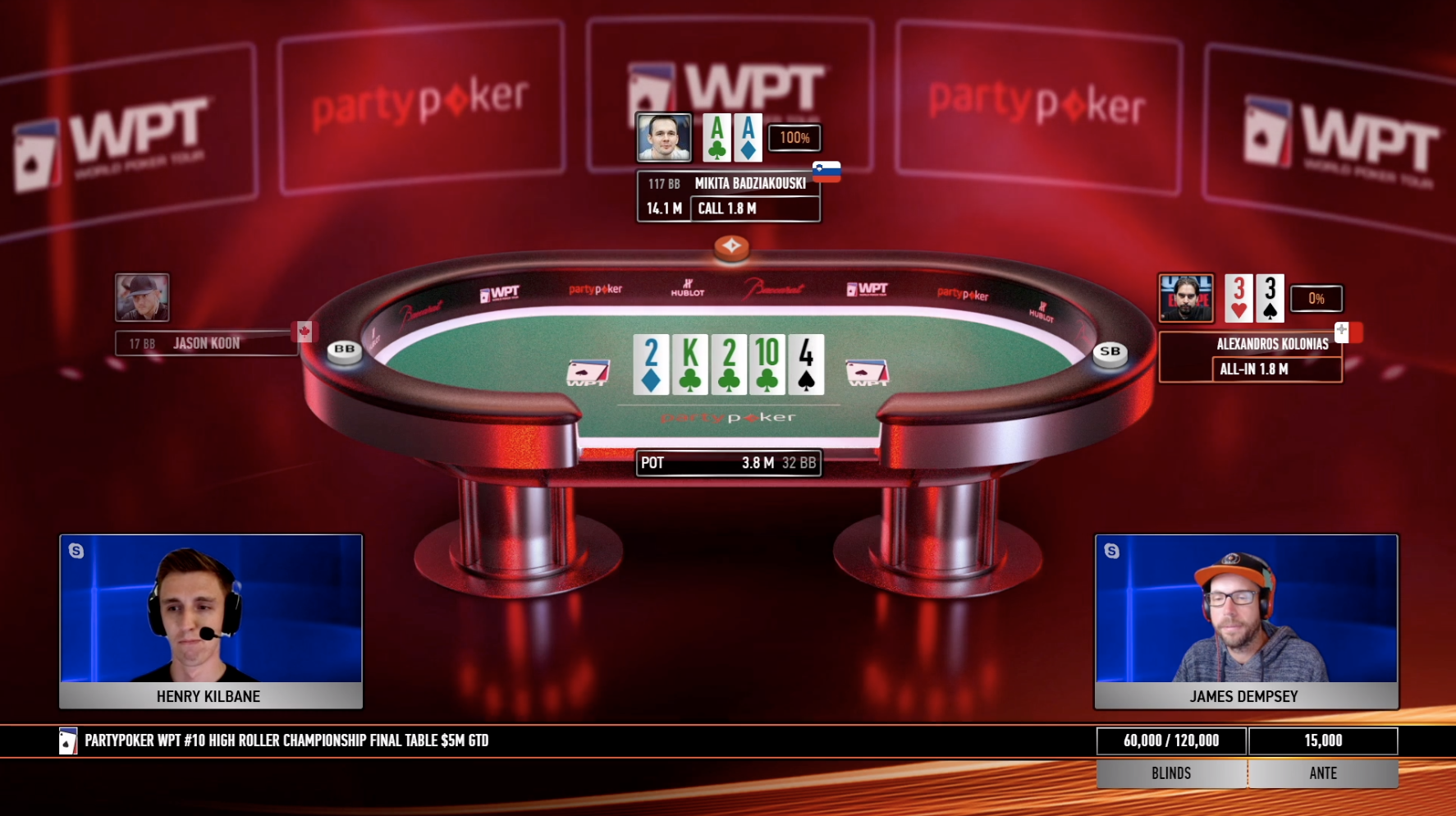 Mikita Badziakouski and Jason Koon entered a negotiation right after Kolonias’ exit. There was still a lot at stake with $779,139 for the runner-up and $1,094,460 for first. Badziakouski, though, had 149 big blinds against Koon’s 17 big blinds. The two, both sponsored by partypoker, agreed on an ICM-deal. With no money left to play for, the event was over then and there with Badziakouski taking home $1,062,730 and Koon taking $810,869, $31,730 more than he would have gotten for second had there not been a deal. 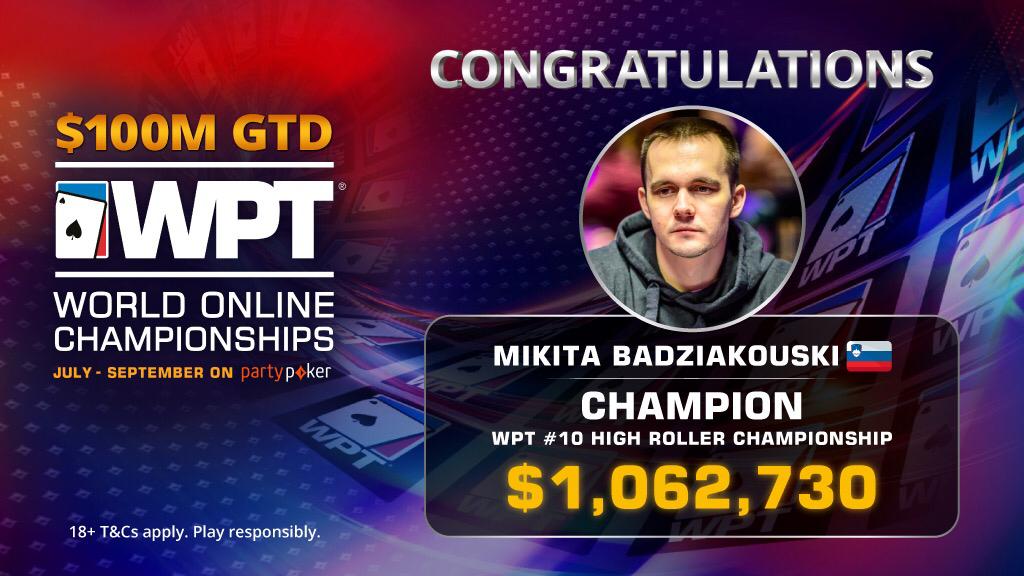 You can read all the action from the final table in the World Poker Tour live updates. You can (re)watch the final table with cards-up coverage over on partypoker’s Twitch channel. 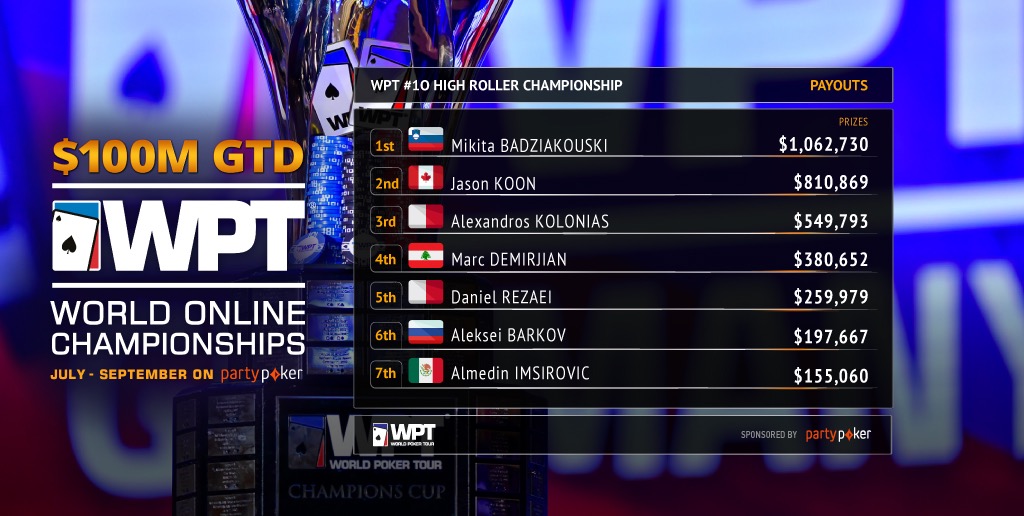 The final day of the Closer event started with twenty players remaining. Dutchman Teun Mulder started in the lead but ultimately fell in seventh place for $6,272 ($3,210 + $3,062 in bounties).

By the time Mulder hit the rail, Juha Helppi (16th, $1,522) and Lars Kamphues (15th, $2,147) had already exited. But plenty of big-name players were still in contention for the sizable first-place prize.

Another member of the Romanello clan, Antoni this time, did one better but went home with less money because he collected no bounties. Antoni Romanello finished fourth for $7,741.

The final day of the Mini Closer started with seventy players left in contention for the sizable first-place prize. As was the case with its bigger brother, the $1,050 Closer, the bounties were a significant part of what players could earn, so the action was fast and furious from the get-go.

Vítězslav Čech, who started second in chips, parlayed his chips into a tenth place finish worth $1,200 ($632 + $568). Diego Miyashiro began in the lead but couldn’t turn that into a spot on the podium. Still, his fifth-place finish was worth $3,495, with $925 coming from bounties. 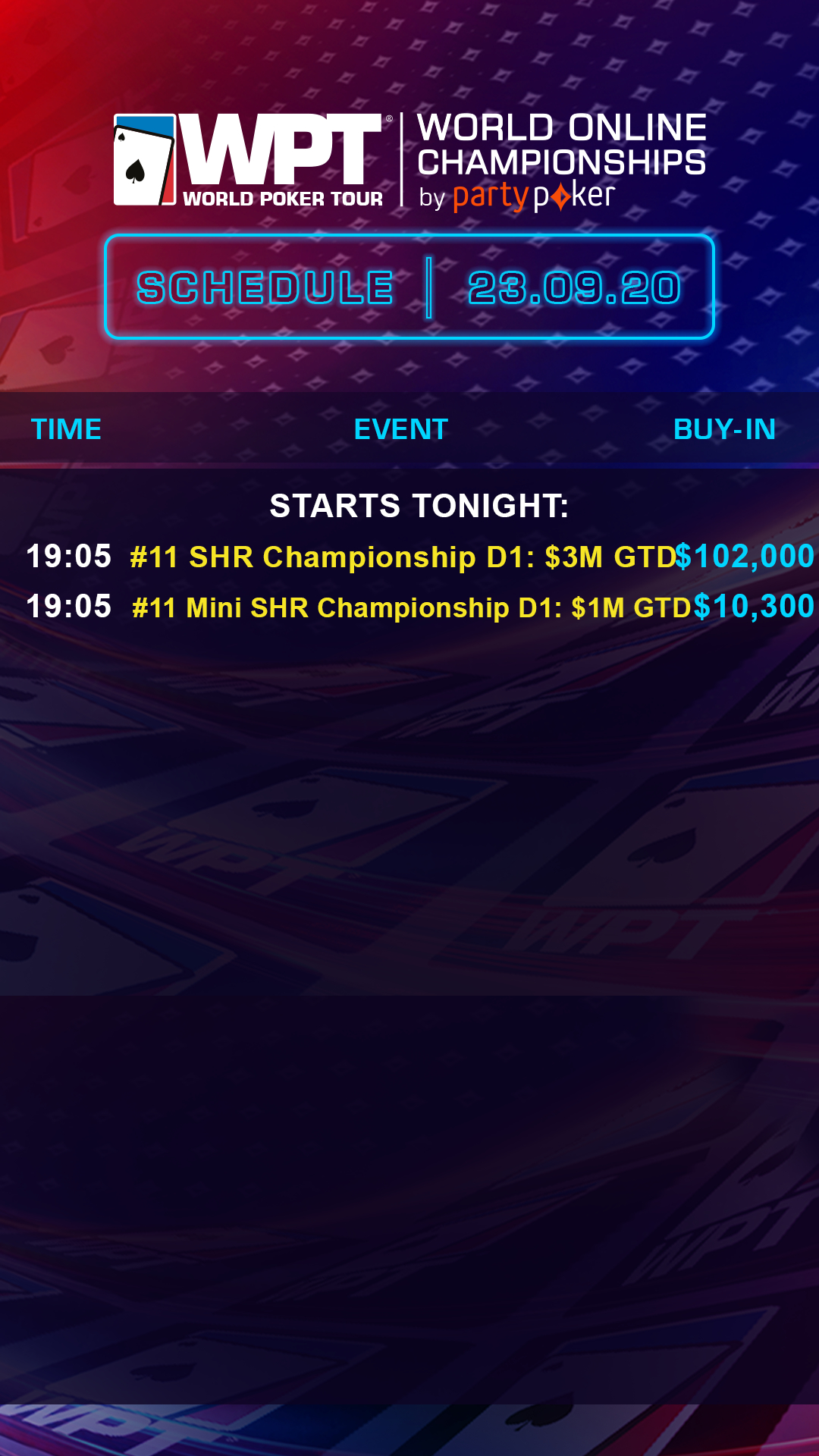