On the Button: Connecting with James Calderaro at WPT Rolling Thunder 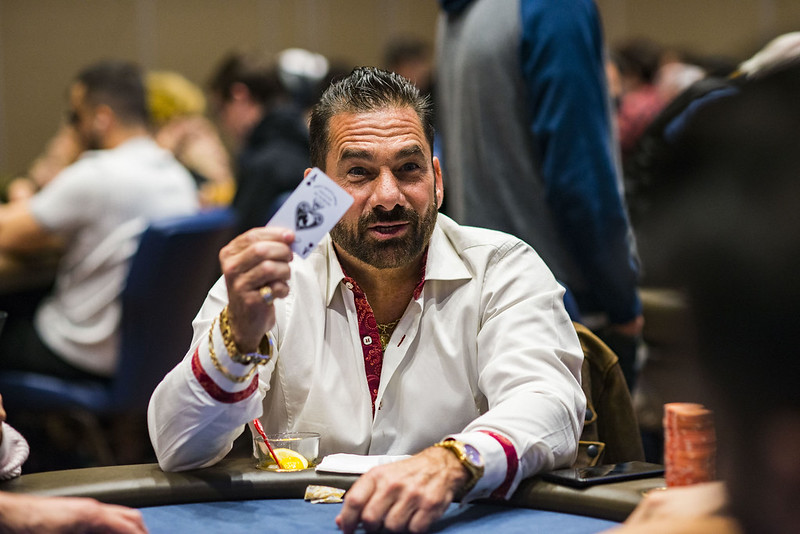 The brash personality, the table talk, the big gold. Finding James Calderaro (pictured) in the poker room is a pretty easy endeavor. But beyond that gargantuan personality and talkative nature is a tenacious poker player with plenty of skills and scores on some of the game’s biggest stages. “Caldo” may always have a smile on his face, but he’s determined, confident, and always looking to send an opponent to the rail.

The 54-year-old grew up in New York, but now lives in Venice Beach, Florida, but much of the time he can be found on the road playing WPT events. Calderaro is now among the field on Day 2 at the WPT Rolling Thunder and spoke about his life in poker.

You were part of a special WPT cash game in the HyperX Esports Arena and among the first players to play in the venue. What was that experience like?

It was really neat, it’s a nice setup. I think it was literally the first game they had in there so it was like 50 degrees. It was freezing, but I thought it was really cool.

How often do you play cash games?

Back home we play Tuesdays and Fridays and I go in spurts. It’s kind of a home game but in a legalized place so we have our own private room. But I mostly play tournaments.

While many see you as this fun-loving, gregarious guy but you’re also serious when it comes to poker. Do you study the game a lot?

Not at all. I think I get better from playing. Each table to me is just a different animal. Every single table is different, so I just see the players and watch behaviors and stuff like that. I just play them accordingly. I look like I’m not observant, but I am [laughing].

So no books, online training, or anything like that?

Never. I can’t stand reading, so I wouldn’t do that anyway [laughing]. I live and learn basically.

What are your plans for the WSOP this summer?

Probably the same – basically staying out there for the whole two months. This year, I was honestly considering just going out for the $10,000 Main Event. But that’s not going to happen, I’m going out there for the whole time. I’m leaving next week for the WPT Venetian, so I’m probably going to get my house then. I’m going to go take a look at a few houses.

You seem to run really well in these big PLO events. Are you looking forward to the $25,000 Omaha (June 17) again this summer?

They added a $50,000 [July 7] this year and I’m going to watch the field. I don’t know if that’s bad or good for the $25,000 event. You can always wait and see. Plus with this crap [coronavirus] going around, the World Series is apparently going to be down.

With your success at these big PLO events, do you think you’re a better player at Omaha or Hold’em?

I’d say Omaha. It’s a much more strategic game. In Omaha, there are so many variables that I think you’ve got to keep yourself out of bad spots – more so in that game than in Hold’em.

Do you enjoy playing Omaha more then?

No, I actually play Hold’em cash, Hold’em this, Hold’em that. Don’t get me wrong, I blow my brains out in cash. I lose my ass in cash games. We used to play a lot of Omaha high cash games, but now they’re hard to find. Other places there are [some games], but when I’m playing poker tournaments I don’t want to start playing a lot of cash.

You’re wearing your WSOP bracelet here at Thunder Valley this week. What made you break it out?

My son had it and asked me to wear it at the LAPC and at this one. I guess if I win I’m going to have to keep wearing it.