On the Button: Poker, Business, and Golf With Jake Daniels 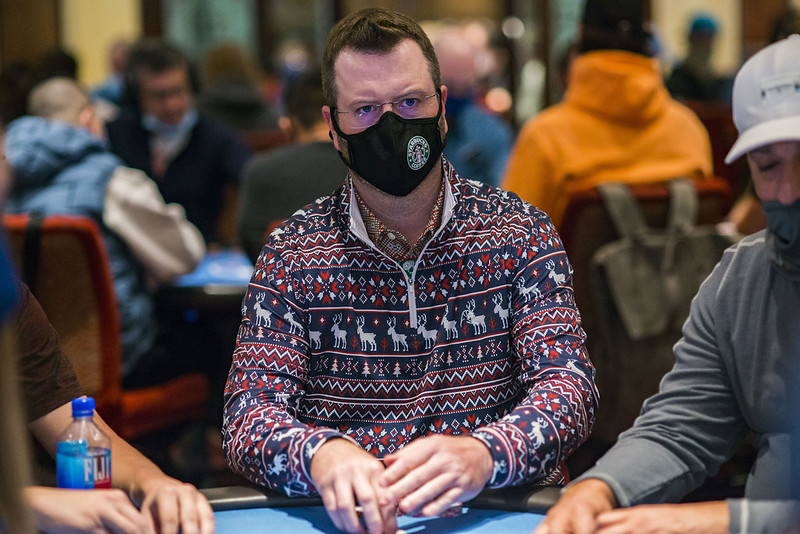 Jake Daniels is ready for the holidays and some hold’em. The businessman and poker player entered the tournament area at the WPT Five Diamond World Poker Classic ready to spread a little cheer. Daniels boasted not one, but two Christmas sweaters. One holiday shirt was covered by another Christmas pullover.

“Brent Hanks calls me ‘The Artist’ so I have to uphold my reputation,” he said before play got underway on Day 2.

Santa was good to Daniels on Day 1 as he built his stack to more than 127,000. He was among the chip leaders for much of the day yesterday, but bluffed off some late in the action. Daniels has some momentum already coming into the series. In June, he won a U.S. Poker Open event for $218,500 and had some other big wins this year as well. He also has a nice score at the Bellagio on his poker record, winning a $5,000 side event for $203,263 at the last Five Diamond in 2019.

A bit of a renaissance man, Daniels’ back story includes some interesting twists and turns. He currently divides his time between Las Vegas and the Houston area in Texas. His family moved a bit during his early years and Daniels attended high school in England. Music became one of his first major passions during this time.

“I won pretty much every competition I played and I traveled to 14 countries for trumpet and I got first in every single one of them,” he says. “I was ranked number eight in the world for 16-year-olds and then came back to Texas and won state. But I tossed my trumpet out the window when I found golf.”

That sport became his next passion. He’s now a +2 handicap golfer and has qualified for two PGA tour events. He plays six days a week and regularly battles some of the Vegas high rollers on the links.

Along the way, Daniels also helped found the customization side of RTIC brand of coolers and tumblers. Four years ago, Daniels sold the company and now spends much of his time betting and bluffing at the poker felt. Since picking up the game more intensely two years ago, Daniels now has $2.3 million in live tournament winnings.

Sean Chaffin is a freelance writer based in New Mexico and Texas. His work appears in numerous websites and publications. Follow him on Twitter @PokerTraditions.