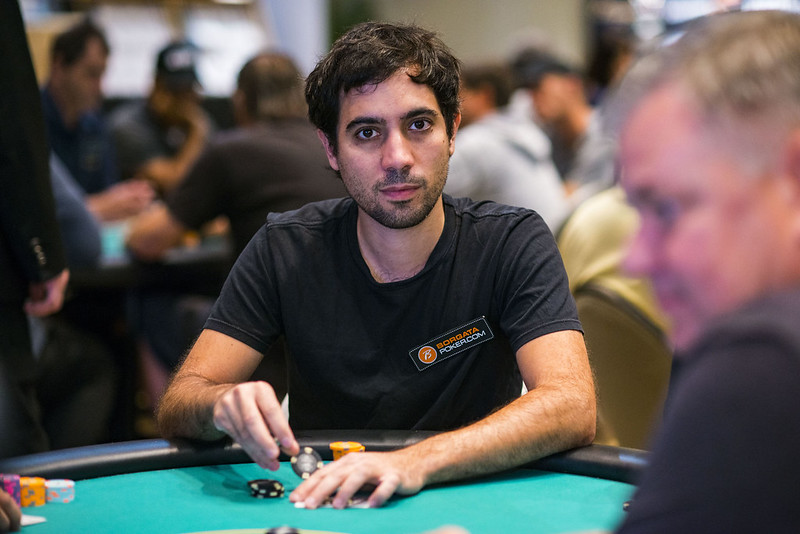 When the new WPT online event in New Jersey kicks off on Sunday, Garden State grinder Michael Gagliano (pictured) will be in a good spot. The BorgataPoker ambassador played in a $45 phase qualifier on Tuesday and bagged over 2.5 million chips.

The $400 WPT Online Poker Open powered by partypoker US Network brings a $300,000 guarantee, and the phased tournament aspect may be something new for regular tour players. A phase tournament offers multiple price points to get into the target event. In the case of the WPT Online Poker Open, Phase 1 is a $45 buy-in and players will begin with 100,000 in chips.

Any chips accumulated at the end of the first phase carry directly into Phase 2, the WPT event. Players can still buy into Phase 2 directly as well. Those who choose this option or win a traditional satellite ticket for this event will begin the tournament with 1 million in chips.

“Phase 1 is designed so that roughly 10 percent of players make it to Phase 2, and the average chip stack of those that make Phase 2 will be around 1 million,” Gagliano says. “However, it doesn’t guarantee your stack is going to be exactly 1 million, some players will bag more than that, and others less, so get in there early and build some stacks.”

Phased tournaments not only build the prize pool of the target event, but offer an opportunity to get in a major event for a bargain price Those with even smaller bankrolls can get in smaller buy-in satellites for the $45 Phase 1 events.

“Plus, and I think this is the best part, you can get rewarded for coming from an early phase,” Gagliano says. “If you play well and accumulate a large stack you bring that right into the event.”

Phased tournaments have become popular at partypoker US Network and offer something different for WPT players. That now includes a chance at some WPT hardware and an $11,000 package to play in the WPT Five Diamond World Poker Classic at Bellagio in Las Vegas.

The New Jersey online poker market has seen a massive spike in the last few months during the Coronavirus pandemic. Gagliano, a poker pro from the town of Glen Gardner, knows the market first hand. The 35-year-old married father of two has come to appreciate the state’s tight-knit poker community.

“There are times I’m jealous of the large international prize pools, but it’s nice playing in the pool of New Jersey players,” he says. “You get to know most of the guys and have a chance to really get to know the ins and outs of people’s games.

“COVID-19 has been crazy for poker. There was a pretty large boom in April and May, with giant surges in traffic. It’s definitely been good having the extra volume, especially when it comes to some of these larger prize pools.”

The Online Poker Open only adds to that spike in traffic and Gagliano is pleased to see the WPT/partypoker partnership expand in his home state. Many players in the state are excited and he hopes this event leads to more.

“The WPT already has two great land-based events at the Borgata every year, so it’s only natural that they work together with Borgata’s software provider partypoker,” he says. “This is the first WPT event on a regulated US site and a lot of players I’ve spoken to are just really excited to be able to participate in an official WPT event from the comfort of their homes.”

Gagliano was already looking forward to the championship, and now has even more to celebrate with a big stack going in. He had planned to play in several Phase 1s in hopes of having a large chip stack for the championship event. If that didn’t work, he planned on buying in directly. That won’t be necessary as Sunday approaches.

In an era when poker sponsorships are more limited, there still remains a market for some even in New Jersey. Gagliano has parlayed his own success into an ambassador role and loves his work representing Borgata. The property partners with partypoker in the state and has its own skin which is part of the overall New Jersey network.

“My role with BorgataPoker.com has been amazing,” says Gagliano, who enjoys playing guitar and video games when not spending time with his wife and children. “I’ve gotten a chance to promote an awesome site in NJ and also had the chance to consult with them on many of the features and offerings that are available today.”

At the live tables, Gagliano has more than $2 million in live tournament winnings. That includes a WSOP bracelet from 2016. He has $162,000 in WPT earnings including a fifth-place finish at the partypoker WPT Prague in Season XI for $99,506. How does it feel taking so many chips into Sunday’s big day?

“It’s awesome, I can’t wait to play,” Gagliano says. “I’m missing out on playing a lot of WPT events because of quarantine cancellations so it would be awesome to make a run in a WPT again.”