Ethan ‘Rampage’ Yau battled HCL mainstay Wesley ‘Wes Side’ Fei in what amounted to the largest pot of Rampage’s career. 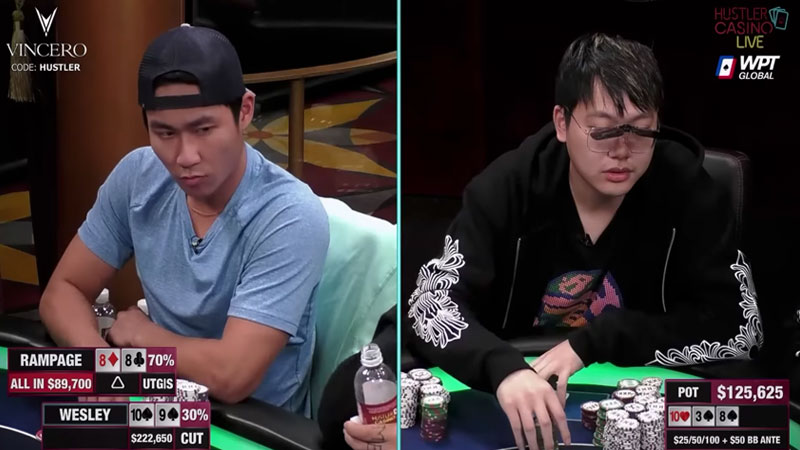 Ethan ‘Rampage’ Yau lived up to his moniker on Wednesday night while splashing around in the Hustler Casino Live high-stakes cash game. Not only did ‘Rampage’ make for great television but he also made some personal history of his own after a clash with up-and-coming cash game star Wesley ‘Westside’ Fei for the largest pot of Yau’s young poker career.

, Yau made the call holding

sitting with roughly $90,000 in his stack. They went three ways to a flop of

giving Wesley top pair and a flush draw while Yau picked up middle set. That’s when the fireworks began.

Out of position, Yau checked to Wesley who fired a bet of $2K. ‘Ali G’, with top pair top kicker, hesitated a few seconds before making it an even $7K to go. The action was back on Yau who re-checked his cards and opted to flat the $7,000. The decision was then to Wesley who didn’t waste any time in three-betting to $27,000. For ‘Ali G’ to continue it was going to cost him everything he had and eventually he released his hand.

“Now does Rampage wanna just call, or go for all of it here,” the commentator said as Yau sat in silence. “Wesley has sent a pretty clear signal that he is not going to fold this hand.”

Almost as soon as this was said, Yau shoved for more than $82,000 more and Wesley snapped so fast the camera couldn’t even catch it. All the cards were on their backs and Yau gave a tight smile, knowing there was a flush draw to fade.

“Do you want once?” Yau asked Wesley.

For context, Wesley has routinely sat in Hustler Casino Live games with $1 million in his stack so while it’s a ton of money for anyone, it was clear that Yau was undoubtedly the bigger sweat.

The turn came the

and some talk of selling some insurance took place. But before anything could get finalized the dealer ripped off the

Yau’s recent rungood continued as he released a sigh of relief and started collecting the $188K pot.