Roman Matveychuk & Courtney Gee Chip Up in WPT500 and Super50; Augusto Hagen & Simon Nielsen Bag a Side Event Title Each

Welcome to the WPT500! There are two and a half weeks of incredible online poker to enjoy right here on WPT.com, with a schedule that has been designed to ensure there is something for everyone – whether NL Hold’em or PL Omaha is your game… classic MTTs or knockouts… small stakes or high roller events, the choice is yours.

The festival is two days in, which means the first two winners of the series have emerged as well as the first starting days in the WPT500 main event and the Super50, so let’s get right on to it by looking at the two players who earned themselves an early WPT title.

The $250 + $15 buy-in event, was second to get out of the starting blocks, and the first to produce a winner. Blinds were fraught with only five minutes on the clock for each one, and the 6-Max and Knockout elements of the structure only added to the fast pace with just three hours and 19 minutes needed for Augusto Jorge Luis Hagen to pick off the rest of the competition.

A total of 190 entries were counted, smashing its guarantee and generating a $47,500 prize pool, of which Augusto Hagen took the lion’s share with almost 20 percent of the total pot going to the Argentinian. He may have taken only five bounties by the end, but with those growing in value as the tournament progressed, he made them count. By comparison, Dutch regular Jacobus Visser eliminated seven players but walked away with $5,594 in prizes while Hagen took $9,503.

Blinds were still quick, but players had a little more room for manoeuvre with an eight-minute blind structure in this one, and it took four and a half hours to reach a conclusion in the $200 + $15 tournament last night.

Simon Nielsen banked himself a title after coming out on top of the 111 field, which culminated in a heads-up match with the UK’s Harsimrenjeet Singh Khehra. No deals were made, ensuring the Dane won as big a portion of the $22,200 prize pool as possible, which was good for $5,545, while the runner-up prize was $3,694.

The first of nine starting flights in the Main Event kicked off the entire festival at 20.05 (GMT) on Sunday. The $530 event has an enormous $1 million guarantee and 393 entries (including re-entries) combined to put $196,500 into the prize pool, which means almost 20 percent of the guarantee has already been generated.

A host of big names got stuck in, but with some fantastic feeder and satellite events making it possible for players with all bankroll levels to take part, there were also plenty of recreational players in the mix too.

Russian online pro and multiple Triple Crown winner Roman Matveychuk (10,131,678) took the top spot once the allotted 12 levels of Day 1 had played out. Players started with 500,000 chips and Matveychuk was the only one to eclipse the 10-million chip mark, though second chip leader Pedro Jorge (9,508,747) came close, missing the milestone by one buy-in. 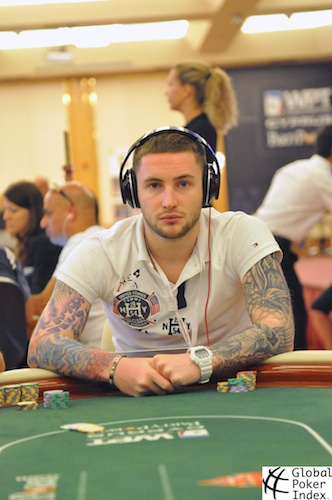 Monday nights usually much quieter than their Sunday counterparts and this week was no exception with 148 entries logged in Day 1b last night. That meant another $74,000 added to the prize pool, bringing the running total to $270,500.

The Super50 may feature a tenth of the buy-in of the WPT500, but with the massive $250K guarantee, there is no denying that this event is going to be huge!

Like the WPT500, this event also features a 500K starting stack and 12-minute blinds, and play was only paused when the bubble burst. The 934 entries were whittled down to 140 over the course of five hours and 2 minutes, and this flight has contributed $46,700 towards the prize pool.

Following Sunday’s opening flight, Day 1b got underway yesterday evening and 524 entries were counted, which added $26,200 to the pot to make a running total of $72,900 collected so far.

Of those, 79 made it through to the second stage and Finland’s Pekka Ikonen (11,939,168) narrowly beat Courtney Gee to first place in the chip counts. Gee, who is a member of partypoker’s Twitch Team, finished up with 11,668,539 chips by the end of four hours and 45 minutes of play.