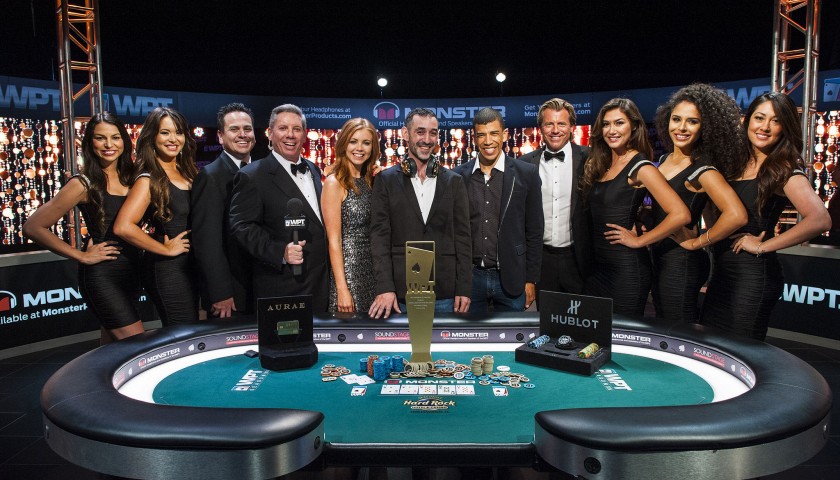 Hollywood, FL (April 24, 2016) – Farid Yachou of Holland was faced with a massive challenge heading into the inaugural Monster WPT® Tournament of Champions at Seminole Hard Rock Hotel & Casino. Not only did the Season XIV WPT Amsterdam champion have to compete against the best poker players in the world less than a year after playing in his first live tournament, but he also had to overcome his immense fear of flying.

Yachou faced his fears, flying across the Atlantic to the United States for the very first time. Once his feet met solid ground in South Florida, he rocketed to the top of the poker world, outlasting 63 of the greatest players in World Poker Tour® history to win the first-ever Monster WPT Tournament of Champions.

“It’s something I cannot believe,” Yachou said after the win, smiling. “I am seated with only champions. I said to myself, ‘I will be glad if I finish 30th.’ Then, day by day and hand by hand it came altogether, and everything came to me.”

Yachou started the day second-to-last in chips, but stormed back and eventually defeated fellow European Vlad Darie heads up to earn the first-place prize of $381,600, a 2016 Corvette courtesy of Monster, a Hublot King Power Titanium watch, an Aurae Solid Gold MasterCard, a custom premium table from BBO Poker Tables, a seat in Tiger’s Poker Night Presented by the World Poker Tour, and a round of golf at Shadow Creek with two friends and Matt Savage.

“The Corvette is something I have never seen a tournament give away, it’s amazing,” Yachou added. “I took my Monster Headphones from WPT Amsterdam because I like to hear the sound it has. It’s not like the others.”

Darie winner of Season XIV WPT Vienna earned $224,190 for his efforts, bringing his career lifetime earnings on the World Poker Tour to more than $400,000.

The four other finalists in the Monster WPT Tournament of Champions all represented the United States. Two-time WPT Champion Darren Elias was the first player to exit the final table, and was followed to the rail by three Florida residents: Noah Schwartz, Jonathan Jaffe, and Michael Mizrachi.

*Includes a seat into the Season XV WPT Tournament of Champions.

“History was made today at Seminole Hard Rock Hotel & Casino, as we crowned Farid Yachou the winner of the first-ever Monster WPT Tournament of Champions.” said Adam Pliska, CEO of the World Poker Tour. “We thank Bill Mason and his team at Seminole for their tremendous hospitality, and all of the players in attendance who helped us begin the great tradition of crowning the best of the best in celebration of the WPT Champions Club.”

With 64 entrants, the Monster WPT Tournament of Champions generated a prize pool of more than $1 million. Eight players reached the money, but Season VII WPT Champion Yevgeniy Timoshenko (8th) and Season IX WPT Player of the Year Andy Frankenberger (7th) bowed out right before the televised final table of six.

Season XV of the World Poker Tour kicks off on April 30 with the partypoker.net WPT Canadian Spring Championship at Playground Poker Club. For more information, go to WPT.com.

About World Poker Tour
World Poker Tour (WPT) is the premier name in internationally televised gaming and entertainment with brand presence in land-based tournaments, television, online, and mobile. Leading innovation in the sport of poker since 2002, WPT ignited the global poker boom with the creation of a unique television show based on a series of high-stakes poker tournaments. WPT has broadcast globally in more than 150 countries and territories, and is currently producing its 14th season, which airs on FSN in the United States. Season XIV of WPT is sponsored by ClubWPT.com, a unique online membership site that offers inside access to the WPT, as well as a sweepstakes-based poker club available in 35 states across the United States. ClubWPT.com also sponsors Season 3 of the new WPT Alpha8 series of super-high roller poker tournaments which is currently in production and which airs on FOX Sports 1 in the United States. WPT participates in strategic brand license, partnership, and sponsorship opportunities. WPT Enterprises Inc. is a subsidiary of Ourgame International Holdings, Ltd. For more information, go to WPT.com.