Paul Petraglia Enters WPT Tournament of Champions with a Plan 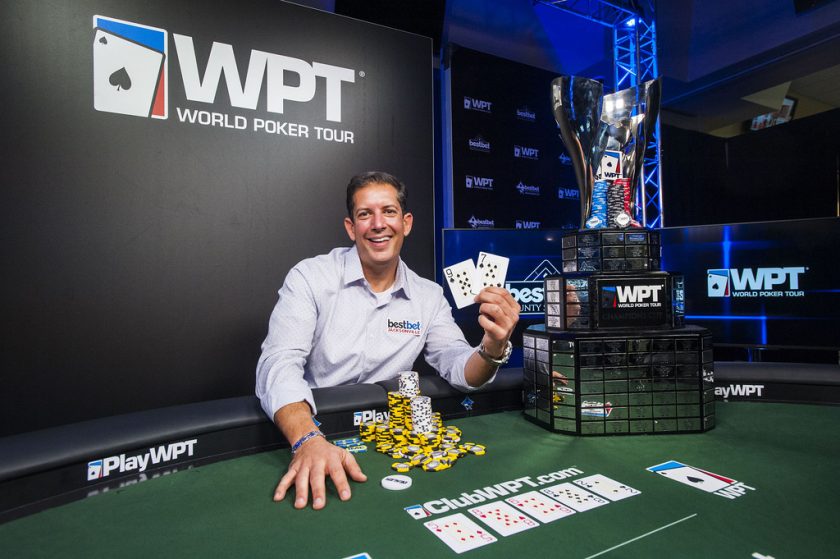 The Season XVI WPT Tournament of Champions is around the corner. On Thursday, May 24, 2018, World Poker Tour title holders will embark on fabulous Las Vegas to compete in the prestigious event at ARIA Resort & Casino. The final table will play out at Esports Arena Las Vegas at Luxor Hotel & Casino on Saturday, May 26. In lead up to the event, WPT.com is featuring all of the winners from Season XVI, who, along with the hefty first-place prize, earned a $15,000 seat into the season-ending WPT Tournament of Champions. First up is Paul Petraglia, who topped a field of 323 entries in the WPT bestbet Bounty Scramble to win $315,732.

The corporate pilot is still in shock from the win six months later. A native of Jacksonville, Florida, Petraglia is a celebrity in the bestbet poker room.

“People still come up today and congratulate me,” Petraglia said. “It’s been a blessing for me; a wild ride and I’m very grateful. I get recognized on the street sometimes. It’s surreal and hasn’t sunk in yet.”

Petraglia won his seat to the WPT bestbet Bounty Scramble through a $500 satellite. The $5,000 entry fee is not the first time Petraglia has competed at one of the highest levels of poker. Petraglia is a two-time participant in the World Series of Poker $10,000 Main Event. In his first time playing in 2011, Petraglia sat with WPT Champions Club member Daniel Negreanu on the feature table.

The competition of playing against the best is what Petraglia thrives off of when playing tournaments. To defeat Elias and Panzica, who have a combined five WPT Main Tour titles, means quite a bit to Petraglia.

“It was one of those things where I’ve always wanted to take my game to that level and compete with professionals,” Petraglia says on why he plays big buy-in events. “To sit down at the table and hold my own was an incredible accomplishment. I still think to myself, ‘I was the least experienced player at that final table.’ Those guys played amazingly well. I’ve got a ton of respect for Darren and Sam. To sit at the same table and compete with those guys is great.”

The WPT Tournament of Champions represents another chance for Petraglia to play against the game’s best. He is not looking at the $15,000 event as a freeroll, though. Petraglia is serious about his preparation for the event. So much so, that Petraglia is utilizing the help of two top poker pros.

“I’ve got a lot of professional player friends,” he said. “[Byron] Kaverman and I share strategy. [Sean] Winter is a friend. I’ve got a lot of people in my corner to talk strategy with and great coaching on my side.”

The want to be prepared comes from Petraglia’s full-time job as a pilot. The need to be ready for unknown variables is what Petraglia transfers over from when he is in the air to on the felt.

“It’s probably my personality,” Petraglia told WPT.com. “Preparation is key. The more prepared you are, the more you can adjust when things go wrong. The mindset and health aspects of all those things can come together. When those things come together, good things happen. This is the best of the best.”

Weather changes in the sky as do opponents at the poker table. Petraglia is accustomed to quick adjustments on the fly. The game plan Petraglia carries to the poker table is subject to change and he credits his mental flexibility to adapt to new variables for his WPT success.

“I would say the biggest one is adaptability,” Petraglia said when crediting his logical assets. “Recognizing the factors that come into play for decision making; what works, what doesn’t. You have to be adaptable at the poker table just as you are flexible when flying. Stick with those decisions to come up with the most productive outcome. It’s reading people and putting two and two together and coming up with an answer to ‘Does this make sense?'”

Those adjustments are going to be key for Petraglia when he sits down at ARIA Resort & Casino on May 24.

The season-ending WPT Tournament of Champions is the first World Poker Tour event for Petraglia since his win in October. A constant flight schedule keeps Petraglia busy and unable to travel outside of the Jacksonville area. Petraglia is only in the air three days a week, but a steadfast checklist of peripherals for the job don’t allow room for three or four days off to travel and play.

“Even though the flying is three days a week, the two days we’re not flying is spent with regulatory issues, dealing with scheduling, organization for trips, maintenance, and oversight,” Petraglia said. “It is a full-time job. It keeps me busy. If I can find a day when everything is taken care of, I try to find an event.”

Petraglia plays cash games and daily events at bestbet Jacksonville and is excited to represent his hometown room in Las Vegas. The warm reception of Petraglia winning in his home casino sticks with him.

“I don’t have enough good things to say about the people at bestbet,” Petraglia said.

The thrill of competing against the best should be at a fever pitch for Petraglia in a few weeks. The WPT Tournament of Champions is a one-of-a-kind event and Petraglia looks forward to sharing his experience with other members of the exclusive WPT Champions Club.