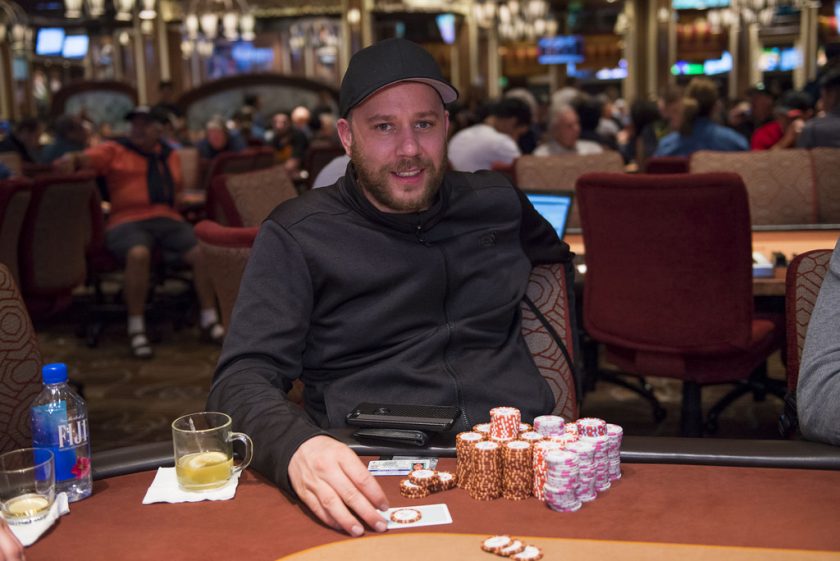 Kevin MacPhee (pictured) bagged the biggest stack in the room at the end of Day 3 in the Season XVI WPT Bellagio Elite Poker Championship Main Event. With 14 players left, MacPhee’s of 715,500 in chips is out in front and he’s more than 200,000 ahead of Sean Winter’s second-place holding of 511,000.

MacPhee had a wild ride towards the end of Day 3. First, on a flop of

, he got all the money in holding the

against Daniel Merrilees with the

. The turn was the

and the river the

. Merrilees finished with a full house and scored the big double through MacPhee.

Later on, after the tournament had reached the money, MacPhee bet 80,000 on the

board. His opponent, Jake Schindler, raised all in for about 245,000 and MacPhee called with the

and missed with the

coming on the river. This pot gave MacPhee the chip lead and he never looked back.

With 17 players left, the tournament was on the money bubble. Scott Eskenazi called all in on the

board against Merrilees. Merrilees showed the

for a full house and Eskenazi’s hand was mucked, sending him out the door in 17th place as the bubble boy.

From there, Paul Kuzmich busted in 16th place and Schindler went out in 15th.

The final 14 players come from a 126-entry field and have all reached the money in this event. They’re all guaranteed $17,111, with a shot at winning the $378,879 top prize. For all but two players in the field, a victory would bring them their first World Poker Tour title. For Justin Young and Ryan Van Sanford, they’re looking to win WPT title number two. Young will return with 157,500 in chips, and Van Sanford has 122,000.

The players will be back in action at 12 p.m. PT on Friday, with the plan to play down to the final table of six. Be sure to stay tuned right here to WPT.com for continued coverage of the Season XVI WPT Bellagio Elite Poker Championship Main Event.

In addition to the $10,400 buy-in WPT Bellagio Elite Poker Championship Main Event, the festival schedule features a $25,000 buy-in WPT Bellagio High Roller that kicks off Saturday, May 5. The first two days of this event will run May 5-6 and the field will play down to the final table of six. After the final table is reached on May 6, the players will break to return on May 25 to play out the final table at the brand new, state-of-the-art Esports Arena Las Vegas at Luxor Hotel & Casino. This event will be filmed for television broadcast and the winner will receive a luxurious Hublot watch.