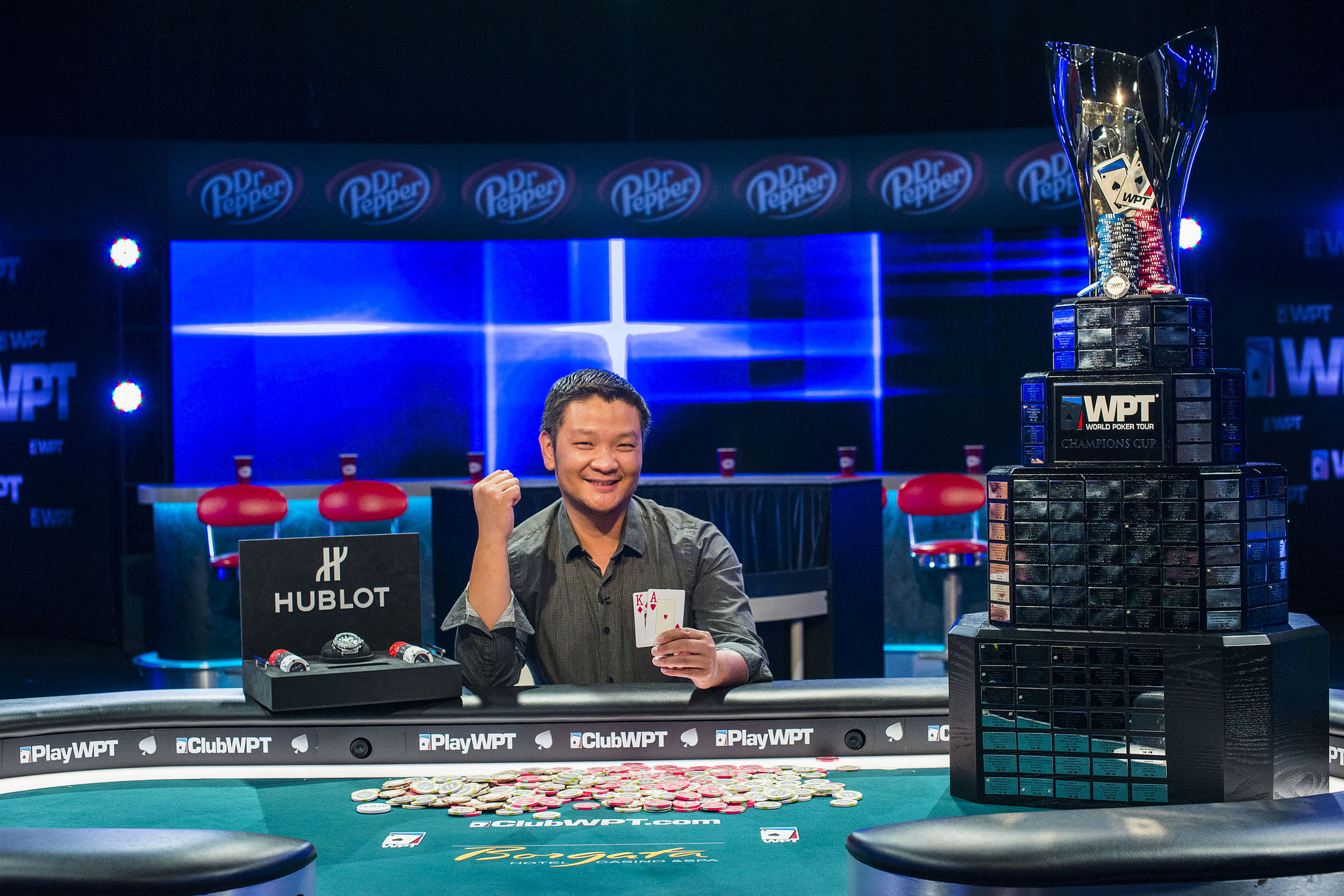 The World Poker Tour has a brand new addition to the prestigious WPT Champions Club and his name is Guo Liang Chen!

Chen fought his way to the winner’s circle after a 10-hour final table in the Season XVI WPT Borgata Poker Open Championship and took home a first-place prize of $789,058. In addition to the lion’s share of the prize pool, which includes a $15,000 seat into the season-ending WPT Tournament of Champions, Chen was awarded a luxurious Hublot Big Bang Steel watch and a $5,000 membership to JetSmarter, the official private jet partner of the World Poker Tour.

In the end, the action at Borgata Hotel Casino & Spa in Atlantic City, New Jersey, came down to Chen against Gregory Weber. Two battled back and forth with one another, but eventually everything turned in Chen’s direction after he gained a ton of momentum thanks to picking off a big bluff by Weber. From that moment on, it was all Chen as he powered his way to victory.

Chen entered this event as a man with 15 live tournament cashes on his record, 11 of which came from events at Borgata. His previous best score was for $13,858, but as evidenced by his words after the event was over, he had nothing but the utmost confidence in himself.

“I had faith in myself,” Chen said after his victory. “I’m a very gifted player, so I definitely thought I could make it.”

Additionally, it doesn’t hurt to have fortune on your side, which is something Chen also pointed out.

“I got pocket eights three times today,” he said. “They were really lucky.”

With his name forever engraved on the season-ending WPT Champions Cup, Chen will go on to compete in the WPT Tournament of Champions against the best of the best, but for now he’ll bask in the glory that comes with earning his first World Poker Tour title.

“I was too excited to sleep last night,” Chen said with a smile from ear to ear across his face. “I’m going to fall asleep tonight with cash in hand!”

Entering the Season XVI WPT Borgata Poker Open Championship final table, Chen was fifth on the leaderboard amongst the remaining six competitors. After the first handful of hands, Chen became the short stack and he fought on the bottom through the first several orbits of action. Then on the 47th hand of the final table, Chen doubled through Thomas Paul in a big way when his pocket kings held up against the

Cliff Josephy was the next to fall, going out in fifth place at the hands of Weber on the 56th hand of the final table. On the short stack, Josephy was all in with the

for Weber. Weber flopped a jack and turned a third one to send Josephy to the rail.

This was Josephy’s second career WPT final table and he earned $199,294 for his efforts.

Chen had been riding high after his big double up with kings, but he was knocked back down to the bottom of the group when Matt Parry, who began the final table as the chip leader, doubled through him. This setback didn’t deter Chen, who stayed the course and fought his way back up the leaderboard.

On the 92nd hand of the final table, Parry hit the rail. It was a bit of a cooler between him and Weber, with Parry’s

of Weber. Weber flopped a king and easily held from there to send Parry out the door with a $240,965 payday.

Going back to what Chen said about pocket eights for him at the final table, hands 137 and 141 at the Season XVI WPT Borgata Poker Open Championship final table were extremely exciting ones involving pocket eights.

On the first, Chen held pocket eights and called a three-bet shove from Jia Liu, who had the

. Liu flopped top two pair and doubled up to knock Chen down to just 20 big blinds. Shortly after that, it was Chen’s turn to double, and this time the eights held for him against Liu, who had pocket sevens. On this hand, Chen flopped a set of eights and rivered quads.

Then on the 156th hand of the final table, Chen eliminated Liu in third place.

Entering heads-up play, Chen was at a disadvantage in chips to Weber. Weber had a stack of 21.425 million to Chen’s 12.45 million, but Chen didn’t give in. He fought hard and then picked off a big bluff by Weber on the 170th hand. After the big bluff that failed, the two players 12 hands. Weber only won two of those before it was all over.

For the victory, Chen scored $789,058 in first-place prize money, a luxurious Hublot Big Bang Steel watch, and a $5,000 membership from JetSmarter. Chen also earned a $15,000 seat into the season-ending WPT Tournament of Champions, plus 1,200 points in the Hublot WPT Player of the Year race for Season XVI. Chen now sits atop the Hublot WPT Player of the Year leaderboard thanks to holding the tiebreaker of most money won over Art Papazyan and Jay Lee, who also have 1,200 points.

Other key results as they pertain to the Hublot WPT Player of the Year race for Season XVI include Josh Kay and Weber. After finishing in third place in the WPT Choctaw Main Event earlier this season, Kay placed 11th in the WPT Borgata Poker Open Championship and is currently in fourth place with 1,100 total points. Weber’s second-place finish in the WPT Borgata Poker Open Championship scored him 1,000 points, and he currently sits in fifth place on the leaderboard.

To stay up to date on the Hublot WPT Player of the Year race, click here.

WPT Maryland at Live! Casino Next Up

Next up for the WPT Main Tour is a trip down the Atlantic coastline to Live! Casino in Maryland. Taking place September 30 through October 4, 2017, WPT Maryland at Live! Casino is a $3,500 buy-in event with a $2 million guaranteed prize pool.

For more on WPT Maryland from Live! Casino, check out the event hub on WPT.com.

WPT Uruguay Also Around the Corner

Earlier this year, the World Poker Tour announced a brand new partnership with Enjoy Punta del Este that will see the WPT bring one of its premier televised events to South America for the first time in the tour’s long and storied history. The full WPT Uruguay festival will run October 31-November 5, 2017, and the $1,500 Main Event of the series will run November 1-5.

Featuring two starting flights and tournament coverage provided by CodigoPoker, the event will be filmed for broadcast as part of the Season XVI WPT television schedule on FOX Sports Regional Networks.

For more on WPT Uruguay, check out the event page on WPT.com.

For more information on all of the upcoming WPT Main Tour stops, click here.