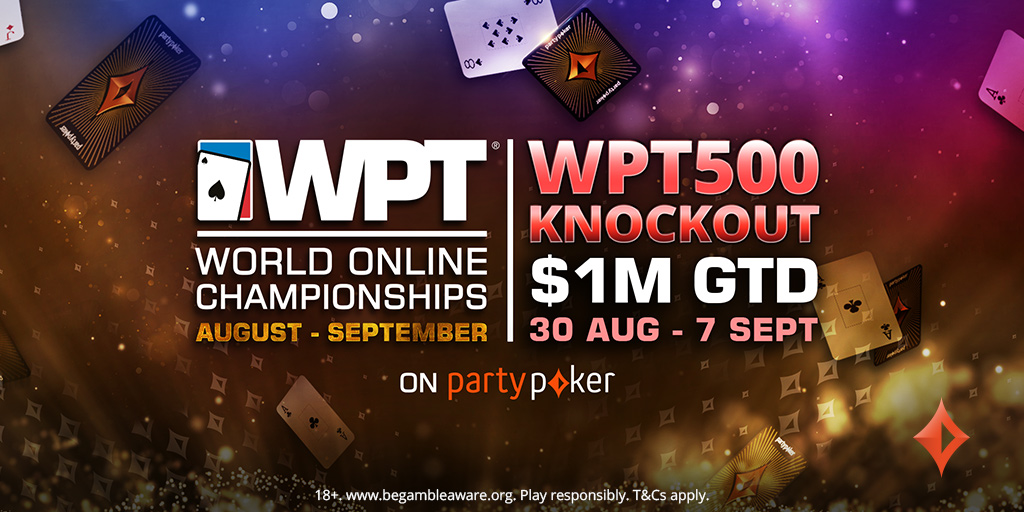 The S19 World Poker Tour World Online Championships enters the final stages and among the latest winners crowned was Greek poker pro Alexandros Theologis. He prevailed on a tough final table in the WPT500 Knockout and added another major title to his online poker resume on the global partypoker platform. The final two starting days of the $5,000 Main Event await and several other Side Events cap off the final weekend of the series.

Theologis Claims Another Major Victory in the WPT500 Knockout

Event #11 6-Max Championship winner Daniel Colpoys was aiming to win a second tournament of the festival as he had reached the final nine in the WPT500 Knockout out of a field of 2,126 entries. They battled for the lion’s share of the $1,063,000 prize pool and the progressive knockout portion played a big role on the business end of the tournament.

Arseniy Malinov entered the final table as the chip leader but he had to settle for fourth place with more than $48k in combined cashes to show for. Next to fall was Colpoys in third, who secured $7,949 in bounties and $41,259 in cash. That left Viacheslav Zaslavskii and Alexandros Theologis to battle for the victory and the latter came fresh off winning a WSOP gold bracelet not long ago.

Theologis prevailed once more to score a payday of more than $115k to show for, while Zaslavskii had to settle for a still respectable $11,520 in bounties and $64,070 in cash. The final table lasted under three hours and was live-streamed on the partypoker YouTube and Twitch channels.

The second starting day of the $5,300 Main Event concluded this past Sunday and none other than Super High Roller champion and WPT Champions Club member Ole Schemion topped the leaderboard with a stack of 3,273,638. A total of 292 entries were recorded and the top 44 finishers made it through to Day 2. Some notable big stacks belong to S18 Hublot WPT Player of the Year Brian Altman, partypoker ambassador Joao Simao, Ognyan Dimov and David Coleman, who all finished inside of the top ten.

Well-known casualties who will have to ty their luck in the remaining two flights were Benjamin Rolle, Anatoly Filatov, Connor Drinan, Gavin Cochrane, Mike Watson, Konstantin Maslak, and Diego Ventura. The final regular starting day will take place on Sunday, September 12 at 7.05 pm BST. As has been the case with the previous two Day 1s, the action will conclude when the top 15% of the field remain.

Three hours prior to the start of Day 1c, a $530 Mega Satellite takes place and guarantees 50 seats for the flagship tournament. Feeder satellites for a much smaller buy-in are available as well to give players of all bankrolls the chance to enter the ring for one of the most exciting online events of the year. Furthermore, the two Mini and Micro editions of the Main Event take place alongside as well. The Micro Main Event costs $109 to enter and offers a $300k guarantee while the Mini Main Event has a buy-in of $1,050 and will pay out at least $1 million in prizes.

The $5,300 Main Event has collected $3.41 million in prize money thus far with 103 players already in the money. One Turbo Heat for each of the three different buy-in tiers takes place on Monday, September 13 at 4.05 pm BST. On top of that, the late registration remains open for the first level of Day 2, which gets underway the same evening at 8.05 pm BST. Below are the stats for the three events after two completed flights.

Event #13 WPT Closer comes with two different buy-ins and the ongoing flights culminate in the final on Monday, September 13. The $11 Mini edition comes with a $100k guarantee whereas the $109 buy-in offers a $500k guarantee.

Last but not least, Sunday September 12 will also feature the three editions of Event #16 Turbo Championship as well:

A wide array of Side Events is available as well to conclude the festival in the days to come.