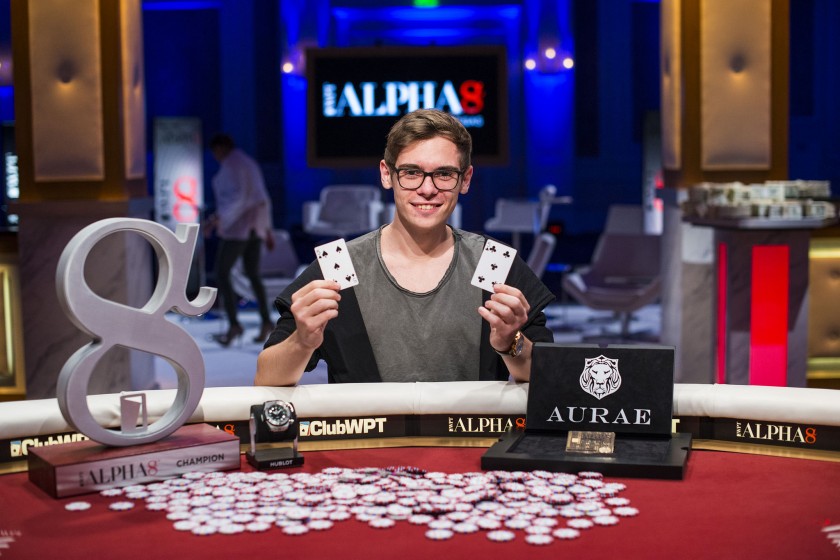 Fedor Holz brought a massive chip lead into the final table of the $100,000 buy-in WPT Alpha8 Las Vegas final table and never even came close to relinquishing it en route to topping a field of 45 players to take home his first Alpha8 title and more than $1.5 million.

In addition to the title, Holz earned a luxurious Hublot Oceanographic 4000 watch and an Aurae Solid Gold MasterCard with $10,000 funded on it and Executive Lifestyle benefits. To find out more about Aurae, click here.

Holz made short work of the final table, finishing off his opponents in just over 100 hands to earn his biggest live cash of his career. His win at the Bellagio brings his total career tournament earnings to over $3.8 million in his short poker career.

At the start of the day, with eight players remaining, Holz had about 40% of the chips in play. At the outset of play, Holz continued to accumulate chips by eliminating David Peters in eighth place to burst the money bubble. Peters was eliminated and the remaining seven players were all guaranteed a cash.

After Peters was eliminated, Holz just continued to accumulate chips without showdown and there were a flurry of eliminations shortly after a break with Keith Tilston, Kathy Lehne and Ankush Mandavia hitting the rail in seventh, sixth, and fifth place, respectively. When four-handed play began, Holz had only accumulated about 60% of the chips in play and had a better than 3-to-1 chip advantage on his closest competitor.

During four-handed play, Nick Petrangelo doubled up through Daniel Negreanu and then eliminated Sean Winter in fourth to make a nice run up the chip counts of his own. Negreanu was left short after doubling up Petrangelo and was finished off by Petrangelo himself, which left Holz heads-up with Petrangelo for all the marbles.

After a short break for player interviews, heads-up play began with Holz holding a better than 2-to-1 chip lead. Petrangelo couldn’t get much going against the German pro and Holz won a flip with pocket fives against A-Q about 30 minutes into the match to take home the title.