Step Back in Time: Jordan Cristos Becomes a Legend of Poker

By Paul Seaton Six years ago, Jordan Cristos (pictured) was 26 when he won the Season XII Legends of Poker Main Event at the legendary Bicycle Casino, known as ‘The Bike.’ Having been focused on winning at all costs, we spoke to Cristos and discovered that life has changed immeasurably for the Los Angeles resident who… 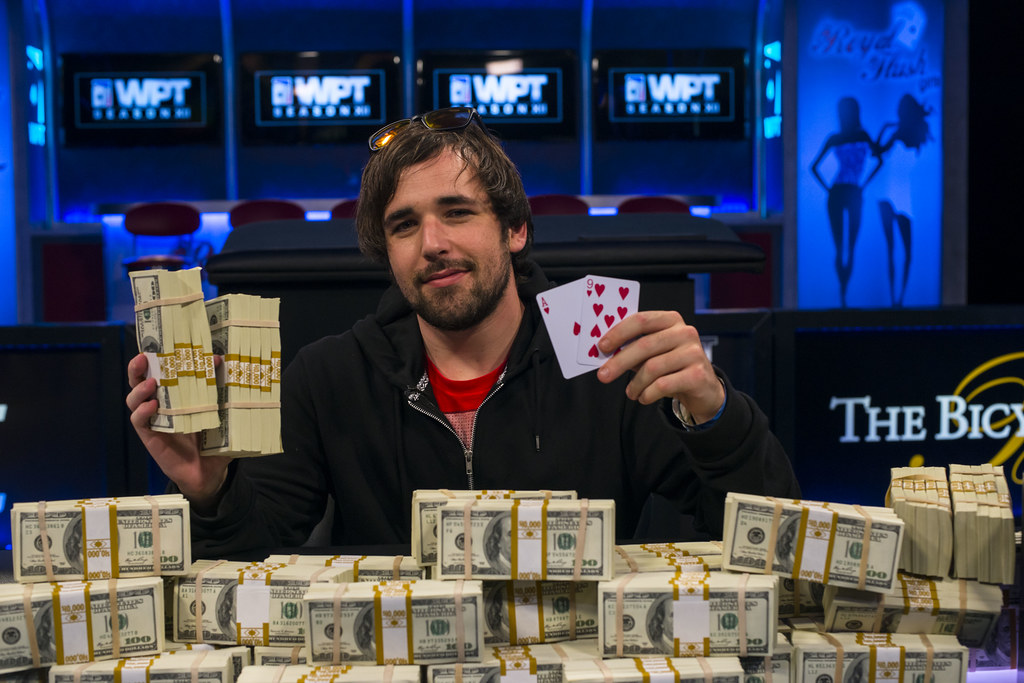 Six years ago, Jordan Cristos (pictured) was 26 when he won the Season XII Legends of Poker Main Event at the legendary Bicycle Casino, known as ‘The Bike.’ Having been focused on winning at all costs, we spoke to Cristos and discovered that life has changed immeasurably for the Los Angeles resident who won his ‘hometown’ event.

“I was a different person, a completely different machine. I eat well now, I quit smoking cigarettes and I do yoga every day. I’m also a father.”

Back in 2013, Cristos was the atypical hoody-and-shades tournament shark. Having honed his skills for years, he had his ‘Eureka’ moment on national television, captured in the final hand of the Season XII Legends Main Event.

“I was 16 when I watched the WPT on TV for the first time. Ten years later, I won one.” says Cristos, clearly fond of the tournament as a fan as much as a player. “For me, Legends, Five Diamond, and LAPC are absolute staple poker tournaments.”

It was a stacked final table that greeted Cristos in his hour in the sun, with tough pros such as Dan Heimiller, Phil Laak, Alex Masek, and Ryan Goindoo, who was a high stakes Los Angeles legend, standing – or rather sitting – in his way.

“The final table comes to mind more than anything else [about the event],” says Cristos. “The whole tournament was a heck of an experience, but the final table was the most important day of my life. It took me 10 years to get to those final five players that I needed to beat and the whole thing was amazing.”

The final hand of the final table saw Heimiller push all-in with king-four of hearts and Cristos call it off with ace-nine of the same suit – hearts. The whole hand took just a minute to play out, but it felt like forever to Cristos when he was on the brink of history.

“When he went all-in, I called, put my head down and I remember thinking ‘hold, please… this’ll be it.”

Players dream about that moment all around the world, winning that first World Poker Tour Main Event. It took Cristos right back to being a teenager in front of the television, transfixed.

“I was 16 years years old, watching the WPT. Ten years later, I’m five cards and 12 seconds away from winning the title. It was unbelievable.”

Cristos had brought a huge entourage of fans with him for support. His brothers, parents, friends and poker mentors were all there cheering him on. He hits a nine on the flop and now Heimiller needs a king. Except the queen lands on the turn, giving Cristos’ opponent extra outs. Time stands still for the boy who has become a man growing up wanting to win this WPT Legends Main Event. One single card is to come.

“It’s always a sweat. He turned a gutter and he needed a king or a jack. In that moment, until the tournament was over, I was stone cold.”

The river is a blank and he turns to his adoring friends and family as if to say with a shrug ‘what did you expect?’. As he’s swamped at the table, he feels numb, even surrounded by so many well-wishers. It’s a bizarre feeling many big winners commonly share.

“After any tournament like that, you’re so drained – emotionally, physically and mentally.  All you can see, think or feel is the winning zone, the focus of it all. You don’t just snap out of it.”

“Before I was a Dad, all I cared about was winning money,” confesses Cristos now. “I was neglectful of my health; I was all about poker and winning money and that was the only thing that made me happy. But being a father has made me look forward to going outside in the sun and watching my kids kick a ball around more than I look forward to a $10,000 buy-in tournament.”

The simple things in life appeal more than the ‘kill-or-be-killed’ world of high-pressure poker decisions. Jordan Cristos turned to yoga for a more balanced lifestyle after watching some of the best in the game perfect the ability to look at themselves and express mindfulness. These days, the boy who burned through episodes of the World Poker Tour on TV, who obsessed about the game until he became a legend by winning the WPT Legends Main Event is content to live life at a different pace.

“When I play poker, I have to remember these skills and mindset it takes to win at poker now. It’s really nice to have a balanced life now. From 16-26 it was non-stop poker, and now I have a life.”

Cristos may have learned to step back, to control his life from within thanks to self-discovery and what he calls being ‘brutally honest with every conscious thought that crosses your mind’. But he can’t wait to return to The Bike.

“The Bike just has this magic to it.” He says, “The way the staff operate, the way people interact with each other. Poker is a different animal in Los Angeles; you have to be there to experience it.”  Cristos cut his teeth at the world-famous poker venue, winning many of his first tournament results there and at The Commerce.

“My first outright tournament win wasn’t actually at The Commerce, though, it was a Rio ‘daily’ [ in Las Vegas]. I saw Pius Heinz lose a big pot there with pocket kings and thought: ‘It sucks to be that guy!’ A few weeks later, he scooped the WSOP Main Event.”

Cristos credits himself as a more mindful, disciplined, self-aware person now than he was back in 2013. All those improvements have had a knock-on positive effect on his poker game.

“I amplify my A-Game mentality throughout the day. Some great players slip for 15 seconds and it’s all over. My personal attentiveness is on another level these days.”

The boy who loved watching the WPT became a champion. But that champion has become a father, a man in the truest sense of the word.

“I don’t know how I did it back then, winning a WPT. Now I feel ready to win ten of them. I’ve been doing yoga every day getting ready for this Legends Series. I’m super-excited, it’s the one that I want and it’s in my hometown.”

From August 31- September 4, the WPT Legends of Poker series is back at ‘The Bike’ as the Bicycle Casino readies itself for poker magic once again. Stay tuned to World Poker Tour for live updates from the event as well as exclusive footage of the action and player interviews along the way. Can Jordan Cristos win it again six years on from his first WPT Main Event victory? This step back in time will tell you it’s more than possible.

Congratulations to Jordan Cristos, the newest member of the WPT Champions Club and now reigning WPT Legends of Poker champion. Cristos earned his title after working his way through a tough – but still fun – final table before finally defeating Dan Heimiller in a thrilling heads-up battle. His victory earned him $613,335, including a…

The World Poker Tour® will return to The Bicycle Hotel & Casino on Aug. 27, 2016, for the 15th edition of the famed Legends of Poker. The event has been part of each WPT® season dating back to the first, and we’d like to take a look at the WPT Legends of Poker through the years…

WPT’s Raw Deal host and professional poker player Tony Dunst‘s latest Tribune Media syndicated column takes a look at one of the defining hands during the heads-up match between Will “The Thrill” Failla and Ken “Teach” Aldridge at WPT Legends of Poker. Excerpt below: “I anticipated a slowly contested match, as neither player is known for…