Las Vegas, NV (August 16, 2022) – World Poker Tour® ambassador Brad Owen will headline the first Brad Owen WPT® World Championship Bounty on ClubWPT™ on August 28, which awards the winner with a $12,000 package to play the WPT World Championship at Wynn Las Vegas. The prize pool for the tournament will also have a $2,500… 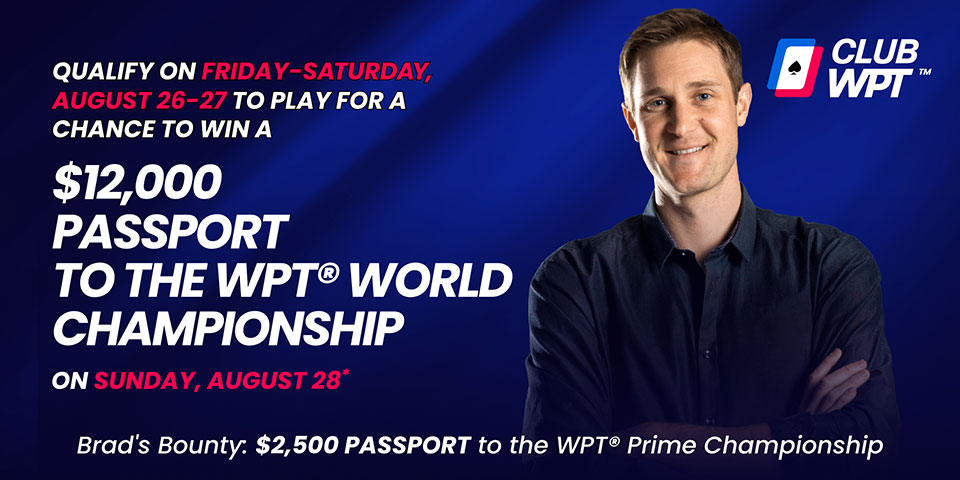 Las Vegas, NV (August 16, 2022) – World Poker Tour® ambassador Brad Owen will headline the first Brad Owen WPT® World Championship Bounty on ClubWPT™ on August 28, which awards the winner with a $12,000 package to play the WPT World Championship at Wynn Las Vegas. The prize pool for the tournament will also have a $2,500 WPT Prime Championship Passport added, which can be won by eliminating Owen from the event.

“We’ve already started qualifying ClubWPT players for the WPT World Championship, but we wanted to sweeten the deal in August by creating this unique opportunity to compete against and engage with Brad Owen, one of the most popular content creators in poker,” said Jeremy Clemons, Vice President of Online Services. “ClubWPT players should expect additional opportunities to join Brad, Andrew, and the other WPT ambassadors at the WPT World Championship in the coming months.”

Players interested in qualifying for the Brad Owen WPT World Championship Bounty Final can do so by playing ClubWPT satellite events on August 26 and 27. On those days, satellites will begin at the top of every hour from 2:00 pm ET until the final one for the day begins at 11:00 pm ET. The satellites for the Brad Owen WPT World Championship Bounty do not require a buy-in for ClubWPT VIP and Diamond members, and signups for ClubWPT will receive the necessary VIP status for their first month. There’s no purchase necessary to play on ClubWPT. Each satellite that runs will advance the top 100 players to the Final hosted by Brad on August 28 at 4:00 pm ET. More information and full terms and conditions on the ClubWPT qualifying path, including how to qualify and location eligibility, is available here.

“Players who are looking for their opportunity to score a seat to the WPT World Championship should give serious consideration to the satellites on ClubWPT,” said Brad Owen. “I look forward to bringing people together and hosting my own event on ClubWPT.”

For more information regarding this event visit clubwpt.com.

World Poker Tour® (WPT®) is the premier name in internationally televised gaming and entertainment with brand presence in land-based tournaments, television, online, and mobile. Leading innovation in the sport of poker since 2002, WPT ignited the global poker boom with the creation of a unique television show based on a series of high-stakes poker tournaments. WPT has broadcast globally in more than 150 countries and territories, and is currently producing its 20th season, which airs on Bally Sports in the United States. Season XX of WPT is sponsored by ClubWPT.com. ClubWPT.com is a unique online membership site that offers inside access to the WPT, as well as a sweepstakes-based poker club available in 43 states and territories across the United States, Australia, Canada, France and the United Kingdom. WPT also participates in strategic brand license, partnership, and sponsorship opportunities. For more information, go to WPT.com.

Even with three third place finishes and seven cashes in nine events at WSOPE 2022, Shaun Deeb didn't get what he wanted in Rozvadov.

Las Vegas, NV (November 18, 2022) – The WPT® World Championship Festival at Wynn Las Vegas is set to dominate the poker calendar in December and thanks to a number of female-focused initiatives, including multiple giveaways and dedicated events, women poker players will be a key part of the overall festivities. “We are so encouraged…

By averaging better than one live tournament cash per week and recording major results throughout 2022, Jesse Lonis is one of this year's breakout stars.

Ethan 'Rampage' Yau battled HCL mainstay Wesley 'Wes Side' Fei in what amounted to the largest pot of Rampage's career.

Feature Tim Fiorvanti The Games We Play: Dan Smith and a Rekindled Appreciation for Chess

A membership at ClubWPT.com has paid off in spades in a short amount of time for Andrew Campanelli. The New Yorker turned his membership* into a seat at the WPT Bellagio Five Diamond World Poker Classic within just four short months of signing up.

In case you don’t remember the incredible run made by ClubWPT.com qualifier Artie Rodriguez at WPT Jacksonville, let us refresh your memory. Just two months after becoming a VIP member of ClubWPT.com (WPT’s VIP subscription-based membership website*), Artie won a seat to WPT Jacksonville where he went on to outlast 387 other poker players to reach the…

Think you’re better than our team of WPT Royal Flush Girls? Now’s your chance to prove it and earn great ClubWPT prizes along the way. The Royal Flush Bounty Tournaments will see your favorite Royal Flush Girl take to the tournament tables, putting their poker skills to the test against ClubWPT VIP members. Eliminate a…