What a night! Alex Manzano has come out on top of a very strong field to become the latest player to enter the WPT Champion’s Club! Not only that but online Swedish legend Niklas Åstedt took down the $1,575 Second Chance in a thrilling end to PLO week.

This week we do it all over again, with 8-Max (NLH) week about to get off the mark, but before we look to the future, let’s take a closer look at Manzano’s victory and the last leg of the journey that made him a WPT champion.

Just seven of the 342 entries had made it this far, exceeding the guarantee and putting $1,026,000 in the pot. There was a lot to play for and the second Championship event of the series got off with a bang as two players bit the dust within the first five minutes of play.

Benny Glaser, who came into the final with around 40 big blinds, was the first to leave in a shock departure just a couple of hands in. Glaser had defended his big blind against chip leader Paresh Doshi who had opened under the gun. Glaser flopped top two pair and decided to play it fast, check-raising Doshi’s cbet before calling the rest. He had the best of it but Doshi found one of three aces that would give him a better two pair and Glaser was out.

Right after that Jesse Rockowitz committed his last 9 big blinds all in and was busted by Alex Manzano, signalling the start of his rise to the top. Alfred Karlsson had already made two ladders at this point and had two doubles bringing him up in the chip counts. That hard work was over in a flash though when he got it in with King-King-Ace-Ten against László Bujtás’s Ace-Jack-Nine-Two preflop. Spiking trip jacks on the river, Bujtás’s took the pot and Karlsson’s run came to an abrupt end.

WPT Champion Mike Leah exited in 4th place. This time the chips went in on the flop with Leah holding pocket-tens and a gutshot straight flush draw, and up against Doshi who had flopped bottom set. The turn filled up Doshi’s hand and he improved to quads by the river sending Leah, and his hopes of a second WPT title, out the door.

László Bujtás was the next casualty. The Hungarian had half of his stack in preflop after called a three-bet from Manzano after the Chilean had limp-raised in the small versus the big blind. Manzano had King-King-Ten-Nine for a pair of kings and the top open-ended draw, ahead of Bujtás’s pair of sevens, an over, gutshot and backdoor flush draw. The turn brought Manzano a straight and he held through the river.

That left two and the pair played out for a short while before finding themselves with a little over 100 big blinds each. They opted to pause the clock at this point and do a deal that left $10,000 and the title to play for, with the ICM calculation splitting the rest almost exactly down the middle.

The heads-up match lasted over an hour on the stream and for much of it, there was little in the way of hand clashes or coolers, meaning most pots played were small or medium-sized. That was until an explosive last hand took place in which Doshi and Manzano both flopped top two pair on a King-Nine-Three flop, but Manzano also had pocket threes in the hole to give him a set. Unsurprisingly, all the chips went in at this point and, with only two outs to chop, Doshi was in terrible shape.

That hand sealed the deal for PLO specialist Manzano, who becomes the latest WPT Champion! Congratulations to him and to Doshi on their incredible performances and well-deserved results. 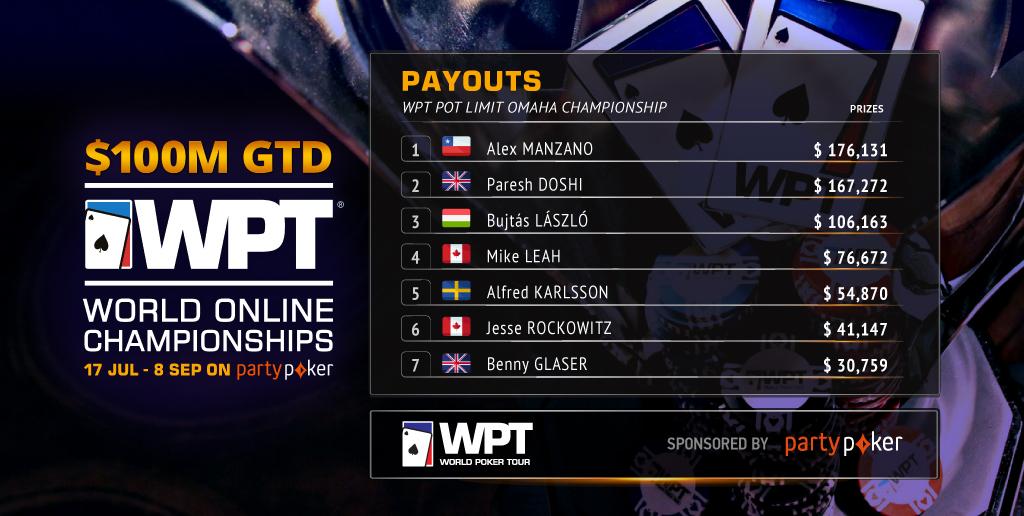 The Mini event came to a surprise end on Day 2 but below is a reminder of how the top five looked when play had concluded.

Derrick Wall began with a huge chip lead, holding 79.08 million, more than two-and-a-half times his closest rival and at least three times more than everyone else. There were no surprises on that front, and it took Wall less than one hour to get his hands on the title, trophy and $13,506 prize.

First out was Dmitriy Grishin, who had begun middle-of-the-pack. He was eliminated in 8th place for $1,500 and two tables combined to one now that the final had been reached. Marco Oliveira busted next despite being joint second in chips at the start. He won $2,000 for his 7th-place finish. Tim Bertilsson was out next, and he bagged $2,600 for placing 6th.

That meant the two shortest stacks at the start of the day had successfully navigated their way to a top-five spot. Serhii Leonov and Ingemar Backman Trast were next to fall and right behind them was Arturs Daugis in 3rd.

That left two with Morten Bloch-Thomsen having to settle for the runner up position and almost $10,000 in winnings, leaving Wall to collect the trophy and the top prize for first place.

He started in front and he finished in front, and it only took Niklas Åstedt a little over an hour and a half to do so. The win banks the Swede’s first title of the series and a tidy $31,200 to add to his bankroll.

Rewinding back to the start and the 11 hopefuls wouldn’t all reach the money stages, with only 9 of the 61 starters getting paid. Sander Van Wesemael was first out, and he was joined at the rail by Emrah Yildiz who burst the bubble. His exit secured everyone at least $3,850 and PLO Champion Alex Manzano took the min-cash position for placing 9th.

Anton Suarez, Imad Derwiche and Andreas Torbergsen got further still but couldn’t go the distance and Åstedt takes his biggest result of the WPT World Online Championships so far.

This two-day event had started with 182 entries and 22 of those survived to the second day. All had secured themselves a min-cash of $402 and Yurij Ivanov, the first to bust, which meant at least one pay jump had been secured for the rest of the field.

Day 2 chip leader Oleg Chebotarev had a great run but came unstuck at the end, losing the heads up match against Przemyslaw Picheta, who hails from Poland.

The final winner of the night was Joris De Baas, who finished atop of the 431 entries that had started the day before. There were 50 at the start of Day 2 and Dmitriy Shmakov came closest to challenging for the title, reaching heads up before losing to his Dutch opponent.

The tournament lasted more than four hours in total and Jiri Bosek, Khrystyna Kunynets and Hitesh Asani also had deep runs, making it as far as the top five.

Tonight, we start afresh as the first No Limit Holdem week gets out of the starting blocks.

The event includes a bounty aspect with some of poker’s best and celebrities each carrying a $500 bounty in the tournament. Among the bounties for the event are WPT Champions Club member Ryan Riess, Team partypoker member Sam Trickett, and Igor Kurganov who will be donating 100% of his proceeds to the charity. 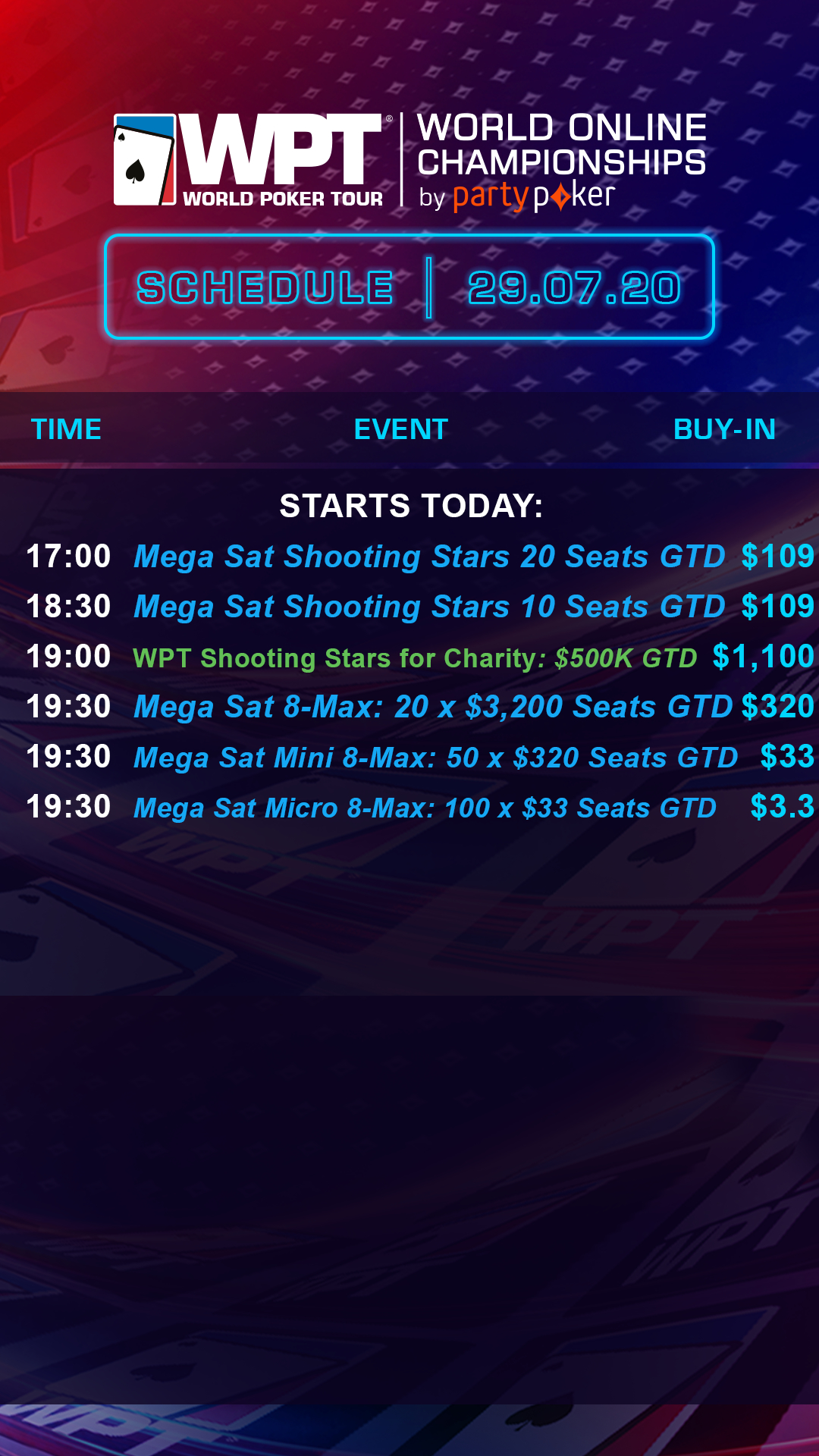