Another fantastic night at the virtual tables took place yesterday evening, and among the many highlights that occurred was the finale of the $25,500 Super High Roller. Not only that, but the second double winner of the series made themselves known as Viktor Ustimov took down the $1,575 8-Max!

A total of five trophies were won, including those in the two one-day hyper events, plus the Weekender tournaments also got off the mark. Phew, that’s a lot to cover so we’d better get started and what better place to begin than with the SHR.

There were eight players returning and all of them had locked up at least $76,125, when play continued at 7 pm.* Action was frantic from the start, with the final table taking just one hour and four minutes to reach its conclusion!

Andrii Novak began with only a few big blinds and unable to spin up, he left the table in 8th place. That wasn’t much of a surprise but Chris Hunichen’s departure in 7th was more unexpected as he began 4th in the chip counts. He had to settle for $87,000, knowing that his exit would secure a six-figure payday for each of the remaining six.

Timothy Adams was next out and, like Novak, he also began the day with less than 10 big blinds. In spite of that, he managed to make a couple of ladders before walking away with $108,750. Irishman Mark Davies departed in 5th place, followed by serial cashers Samuel Vousden and Pauli Äyräs, which left Day 1 chip leader Juan Pardo Dominguez to battle it out heads up against Elio Fox. 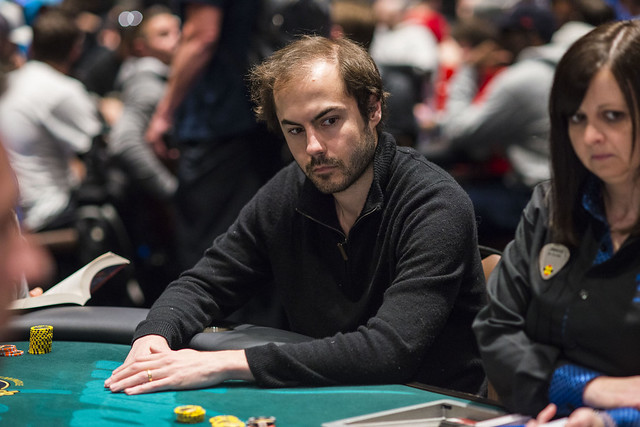 In the end, Canada triumphed over Spain as Fox took home the trophy and top prize as well as those all-important bragging rights!

Next up was the 8-Max and only 22 were still in contention of the 451 entries that had started the day before. For the second time – and the second day in a row – there was a two-time winner as Viktor Ustimov claimed the win. He banked $127,521 for the result, which added to his cash for first place in the $1,050 Mix-Max Bounty, makes a total of $189,627 in winnings in these two events alone! 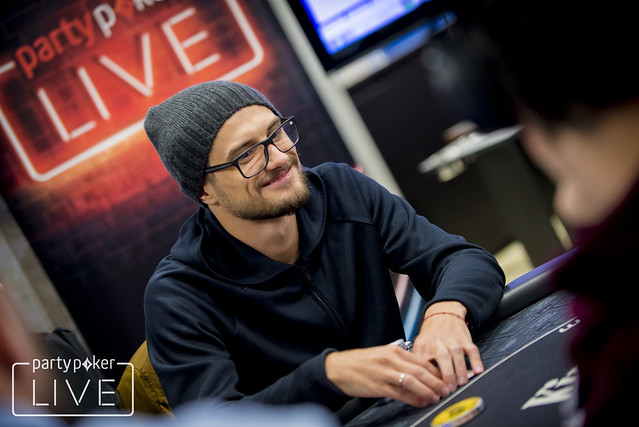 Jerry Ödeen came closest to dethroning him and took the runner up spot. Jonathan Proudfoot took 3rd place and finished ahead of István Birizdó (4th) who achieved his second final table since his 4th place in the Opener on launch night. German pro Stefan Schillhabel took 5th, ahead of Teun Mulder who received $22,325 for 6th place. Samuel Vousden – never absent from a final table for long! – cashed $15,898 for coming in 7th, whilst Dimitrios Farmakoulis completed the final table for a $11,501 cash.

It took over eight hours of battle across the felt, before Jonathan Rosa claimed the title, trophy and a fantastic $41,172 return on his $162 investment. A total of 1,627 entries became one, after namesake Jonathan Clark lost the heads-up match.

Meanwhile, Marcello Miniucchi and Eduardo Moreno Cardigo each took a five-figure sum for their third and fourth place results, whereas some of the most recognisable names such as Mohsin Charania, Simon Deadman and Dorian Rios fell outside of the final table.

The fast structure tournaments continue to be popular, with 227 players stumping up the buy-in to generate a $113,500 prizepool. With five-minute blinds, it was never going to take long to reach a winner and after three hours, Stuart Menzies had managed to see off all the opposition to claim first place. 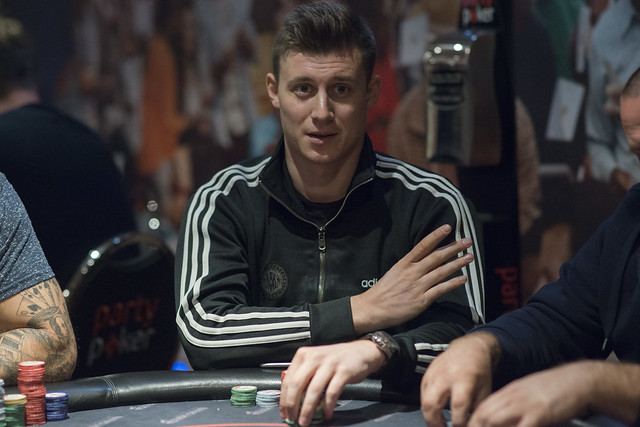 There were plenty of tough opponents for him to outlast, such as Swedish pro Anton Wigg who took the runner up spot. Bernard Larabi, Guillaume Nolet, Kamel Mokhammad and Francois Billard all bagged themselves a seat in the final and denied some quality poker players a place, with Alex Foxen (7th), Max Silver (9th), Gianluca Speranza (13th), Yuri Dzivielevski (16th) and Team partypoker Dzmitry Urbanovich (17th), all reaching the top 20.

The Mini event took a little longer to reach its conclusion, with 828 runners in play. The larger field meant it took four-and-a-half hours for Marllon Pinto to get his hands on a trophy following his victory over runner up Petar Leshtov.

Team partypoker Josip Simunic (16th) and Jon Turner (21st) were among the notables who made a deep run in the event that paid out $41,400 in prizes.

Day 1a of the $2,100 6-Max Weekender kick-started the event that will play out over three days, with Day 1b playing this evening and a Turbo Day 1c flight taking place ahead of the Day 2 final tomorrow.The format is the same for the $215 Mini 6-Max Weekender but first, let’s take a look at who bagged biggest in the higher buy-in comp. 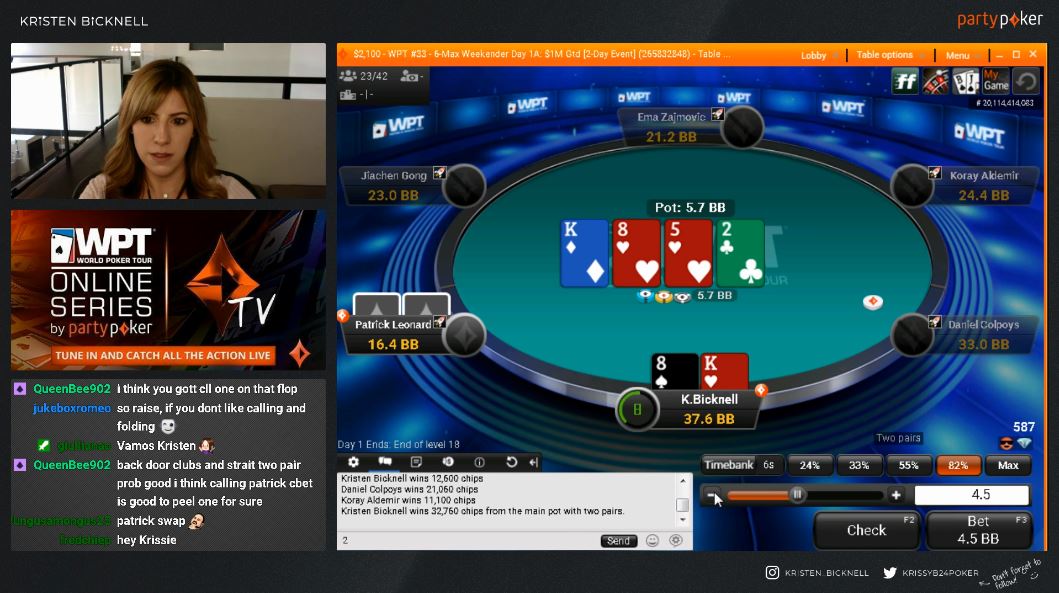 Nicolas Yunis (673,887) goes through and Eric Wasserson (558,666) completed his night with another big stack accumulated, to accompany his top-five stack in the $2,100 event. Mohsin Charania, 6-Max Turbo winner Andrey Kotelnikov, Florens Feenstra and Team partypoker Renato Nomura are just a few of the well-known players still in contention.

As well as all of the above, don’t forget the $3,200 Main Event continues with Day 1b at 6 pm tomorrow. Satellites are running now, so don’t miss out on your chance to play the WPT Online Championship that has an incredible $5 million guarantee! 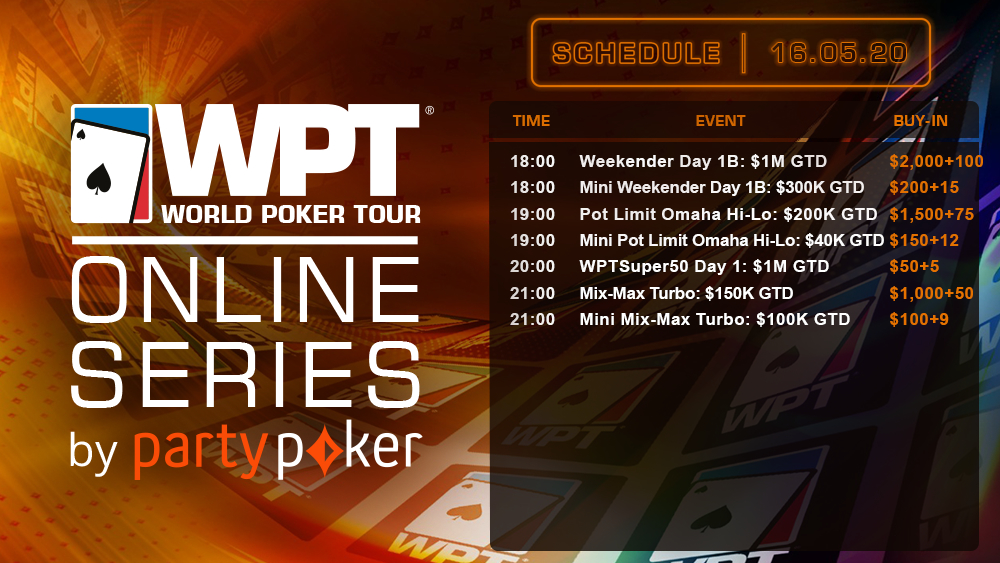 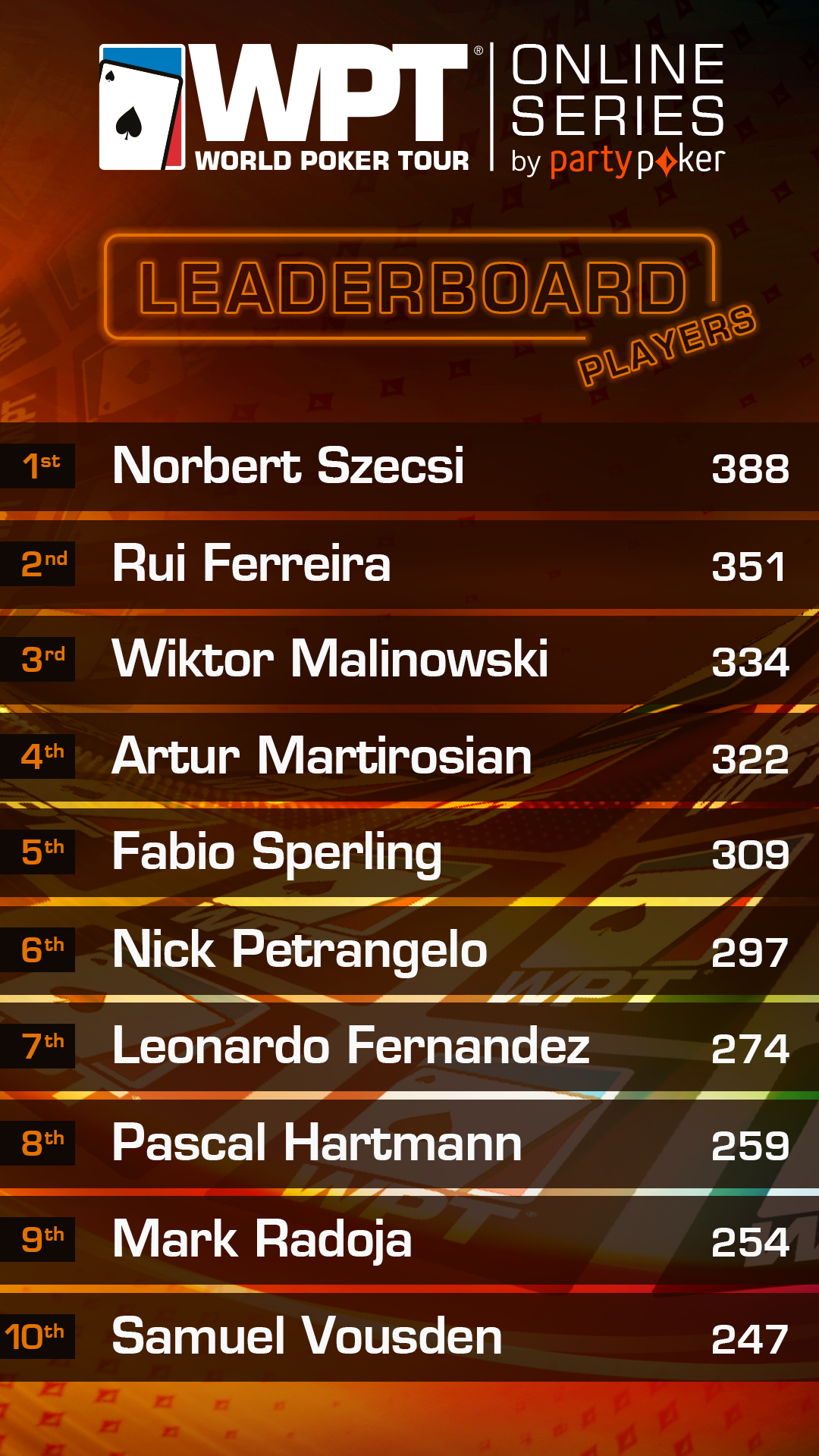 Norbert Szecsi and Rui Ferreira remain in the top two spots as Wiktor Malinowski’s High Roller victory bumps him up into third. Artur Martirosian’s final table result in the same tournament awards valuable points that see him move up into fourth place ahead of Fabio Sperling.