Yesterday’s schedule was one of the quietest we’ve seen so far this series but don’t worry, there were still three new title holders emerging over the course of the night. Not only that but the 7-Max Weekender comps all got out of the starting blocks, as did this week’s main attraction: The $3,200 Omaha Championship!

Yesterday afternoon, the PLO Warm Up events continued at 2pm (BST) with a turbo Day 1b flight open in each, before the second and final day kicked off at 5pm.

There were 47 entries in the Main and just over two-and-a-half hours later, ten had progressed with Antoni Romanello (814,732) holding the biggest stack and his brother Nicholas Romanello (155,085) having the opposite experience, finishing up at the bottom of the counts (and shortest overall across the two starting flights). Gregor Prizmic-Martini (778,474) and Alex Difelice (629,376) were Antoni’s closest rivals at the end of play.

The ten Day 1b survivors joined with the six from Day 1a and when play resumed, it meant just one unfortunate soul would finish outside of the money. Jeff Gross was the third shortest at the start and it wasn’t to be his day, falling first and securing everyone else a $2,250 min-cash in the process.

We were hard pushed to find a name in the player list that wasn’t recognisable in the world of PLO and Lars Nordkvist Brodin (15th), Nicholas Romanello (14th) and Dimitrios Michailidis (13th) busted next, all taking that min-cash with them. Benjamin Juhasz (12th), Artsiom Prostak (11th) and Kristoffer Jakobsson (10th) fared slightly better, taking $2,500 for laddering one spot.

Jose Ferro, Erik Dahlberg and Dante Fernandes all had fantastic runs, but couldn’t outlast Gregor Prizmic-Martini and Klas Simon Löfberg who were the last two standing. No deal was struck during the heads-up match and Dutch player Prizmic-Martini fell at the last to take the runner-up spot, with the title going to Sweden as well as that $27,013 first-place prize.

Another 83 entries were counted, with 18 players progressing to the final stage of the competition. Toan Nguyen (1.27 million) accumulated the most chips and was the only player to exceed seven-figures. Pavlos Karagiannidis (898,774), Kalle Helin (711,076), Lasse Enojärvi (671,068) and Alessandro Valli (612,510) chipped up too and qualified for Day 2 knowing they were all but certain to see a return on their investment, as 36 of the 40 players still in would be paid.

Florian Fuchs was the unfortunate bubble, boy busting in 41st place and securing everyone else still in $217 in the process. Artsiom Prostak (20th, $270) and Arnaud Enselme ($330) were among the notables who had deep runs and Rui Bouquet was another. Bouquet managed to climb up through the counts, but he was eliminated just outside of the final table, taking $990 for 7th place. That locked up the six-figure cashes for the final tablists, with Alexander Harty the first to depart for $1,290.

Once Pavlos Karagiannidis, Deniss Lebedevs and Rasmus De Fønss Strømholt Gandrup were dealt with, only one player remained in Eder Campana’s way and that was Alexander Jung. The heads-up battle rounded off an extremely fast-paced second day, one that was all wrapped up in just over three hours, despite the 15-minute blind structure. At the end of it, it was Campana’s turn to shine and he scooped the second title of the night, with Jung finishing in the very respectable runner-up position.

Moving onto Day 2 and, in comparison to its sister tournaments, this one lasted an epic five hours and 15 minutes. Just seven players needed to bust to reach the money stages and it wasn’t Florian Fuch’s night, adding a soft bubble (87th) to his pure bubble in the Mini event. Jelle Huysmans (85th) was the stone-cold bubble and that let Ajay Chabra (84th) in the door, who collected $34 for scraping a min-cash.

Nicolas Hopkins (6th, $355) was the first to bust the final table and Jonatan Nilsson, Johan Ekerfelt and Volodymyr Kashuk followed him to the rail. That left two and Daniel Litchfield and Vitalii Pervov battled it with the Russian coming out on top, to score the biggest chunk of the prizepool as well as his first title of the series.

The second Championship events of the series got underway last night, and the Main was a star-studded affair that saw British grinder Benny Glaser climb to the top of the counts. His 1.23 million stack is the one to beat with Day 1b taking place at 7pm (BST) tonight. 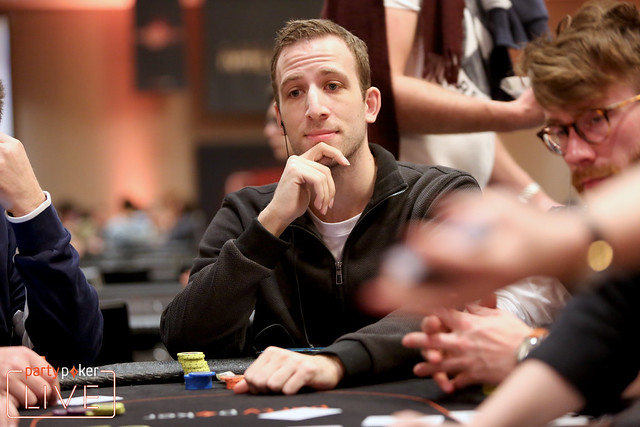 Mike Watson, partypoker Millions UK 2020 winner Anton Suarez, Alex Foxen, Davidi Kitai and Mike Leah were some of the big names that fell before the final whistle, and they will all need to re-enter to stay in with a shot. Meanwhile it was a bad night for Niklas Åstedt and Dan Shak who exhausted both entries in this flight and are out of the running altogether.

Over in the ‘Mini’ (and that’s not something you can say often about a $320 online comp), 403 registrations contributed to collecting $120,900 for the prizepool. Fifty-four players progress to Day 2 tomorrow and it was Andrea Salvatore (1.75 million) who had the chip lead when play paused at the end of Level 18.

It wasn’t good news for everyone as Javier Zarco, Robin Ylitalo, $1,050 Warm Up runner up Gregor Prizmic-Martini and WPTDeepStacks Online winner Jareth East all hit the rail before the end.

The Micro version still has a huge $100,00 guarantee and 1,016 entries were counted, putting $30,480 into the pot. Of the starters, 123 have secured themselves a seat in Day 2 and Russia’s Konstantin Doroganov is the man to catch with 2.84 million in play.

Day 1b in all three buy-in events starts at 7pm this evening and there is the opportunity for some great value and with sats running all afternoon too, it is a fantastic chance to start your campaign to become a WPT Champion.

We promised huge guarantees throughout this festival and the second one-million guaranteed tournament kicked off yesterday evening! Offering players a slightly different variant with its 7-Max format was the Weekender, a No-Limit Holdem trio of tournaments.

In the Main, there were recognisable names galore among the 171 starters and the highest achiever of the night was non-other than British pro Tom Hall, who bagged 1.76 million for his efforts, not bad at all considering the starting stack was 100,000.

Almedin Imsirovic (22nd), Roberto Romanello (23rd), Scott Margereson (24th) and Kristen Bicknell (25th) all fought hard but were out just before the clock was paused.

Another British notable topped the chip counts in the Mini event, as Ben Farrell turned 100,000 into 2.7 million. His wasn’t the only impressive display, however, with Brazil’s Daniel Melo (2.67 million) finishing just a whisker behind.

The field was 910 by the time late registration closed and Kim Darling Wittendorff (2.2 million), Matheus Grazziotin (2.13 million) and Radjendernath Chigharoe (2.1 million) also fared very well. Arsenii Karmatckii (1.58 million) and Andreas Klatt (1.35 million) finished in the top 20, with 103 surviving to Day 2 tomorrow and will be joined by fellow notables that include Parker Talbot (1.21 million), Luke Martinelli (964,002) and Michel Dattani (654,316).

The final tournament of the night was the Micro edition but as is typical of the lower buy-in comps, it had the largest field size. In total 1,578 buy-ins were paid, which put $31,560 into the prizepool. That means a great opportunity to get some value for anyone thinking about playing tonight.

Once the dust had settled at the end of Level 18, 179 had secured themselves a spot in Day 2. Mark Mounsey (2.66 million) just nipped into the lead, with Mathias Huber (2.6 million) coming in close second. Joao Batista Carneiro De Andrade (2.45 million), Valerii Datciuk (2.44 million) and Артем Субаков (2.29 million) all had strong starts to their campaigns too. 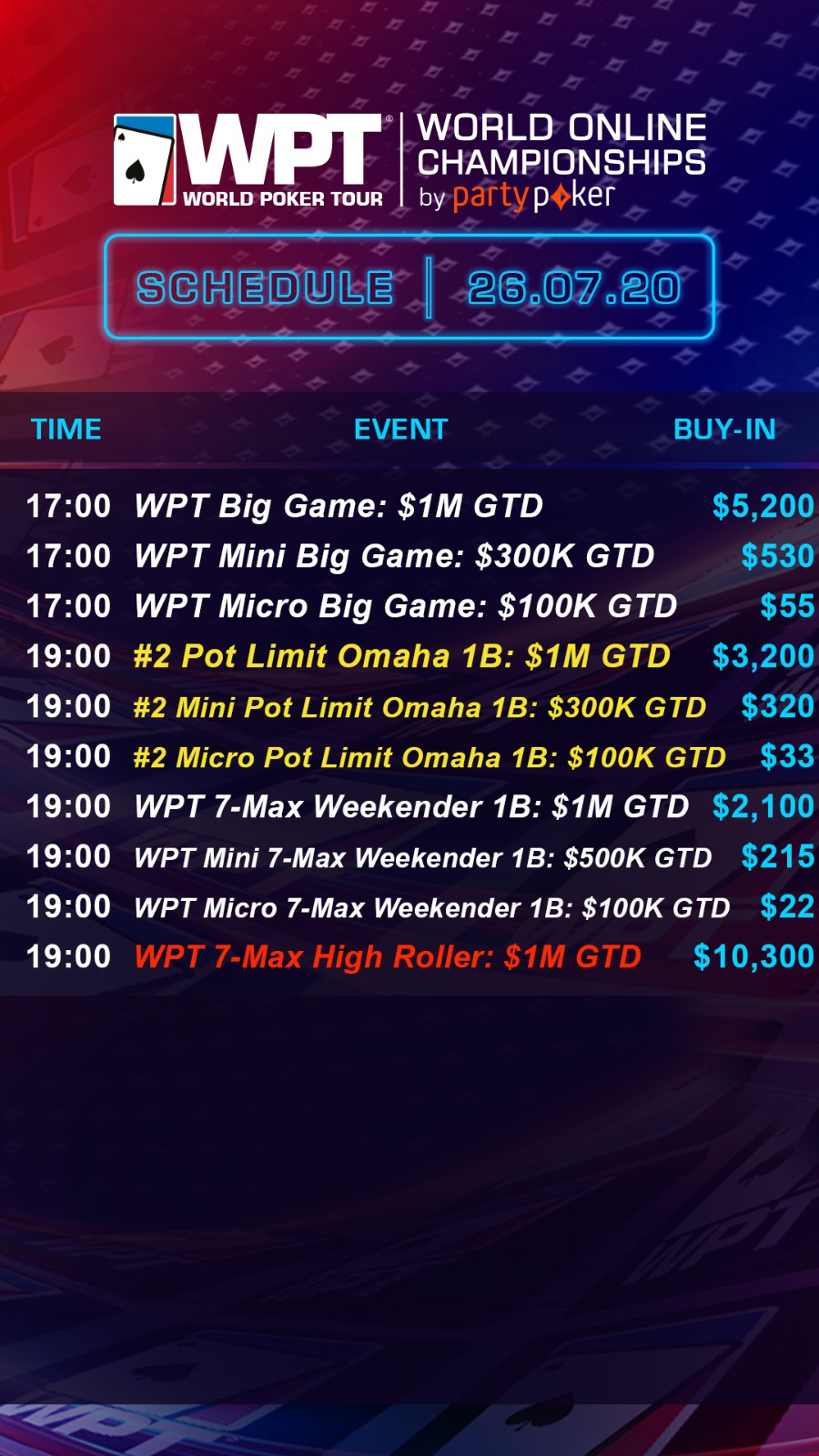 Day 1b in the Omaha Championship and 7-Max Weekender (for all three buy-in levels) starts at 7pm. The two-day $1M GTD 7-Max Weekender High Roller also gets off the mark tonight, as does the $1M GTD Big Game with a Main event featuring a $5,200 buy-in (and Mini and Micro editions).

That makes four tournaments on offer with a $1M guarantee tonight!