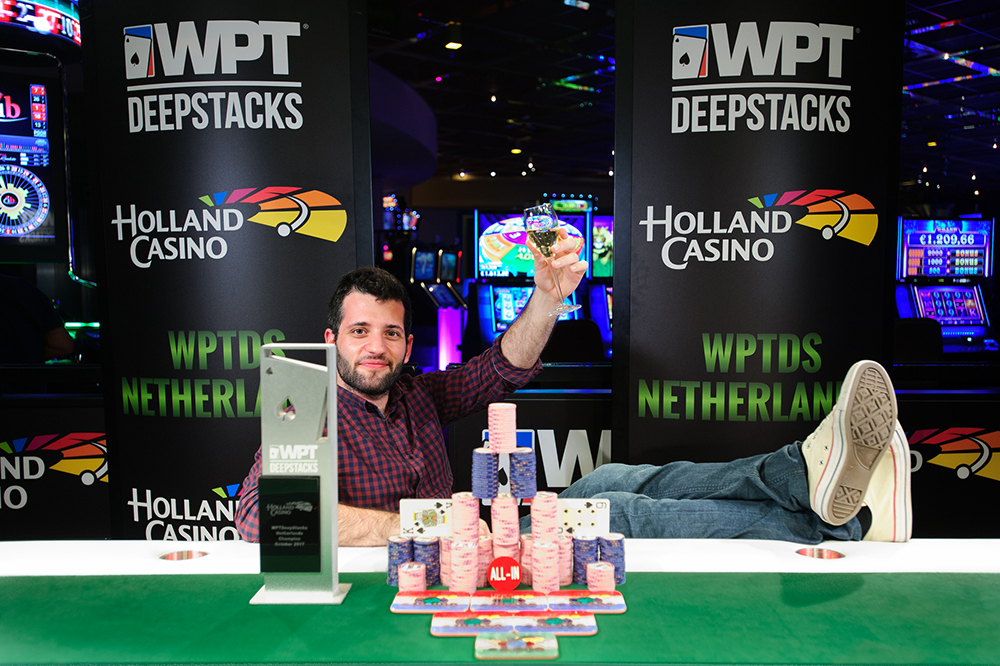 Ioannis Konstas went from eliminating the first three players of the final day to taking down the entire tournament to cap a successful WPTDeepStacks Netherlands festival for the Greek player.

Following his fifth-place finish in the WPTDeepStacks Netherlands High Roller earlier this week, Konstas came into the final table of the WPTDeepStacks Netherlands Main Event with the chip lead. After a heads-up tussle with home favorite Tobias Peters, Konstas was victorious in the tournament shortly before 1 a.m. local time, winning the trophy and €56,805 first-place prize.

*First prize includes a €2,000 package to the WPTDeepStacks Europe Championship to be held in Berlin, Germany, in January 2018.

With 12 players remaining, the field started just three eliminations away from the final table on Day 3. Konstas eliminated Paul van Oort, Martin van Beek, and Maribel Galiano in quick succession to put himself in the position as chip leader to begin the final table.

The first elimination of the final table came when Bernard Elfvering ran top pair into the set of Jonas Wohlgemuth, and after that, the remaining eight players settled into a series of double ups, including Rens van der Venne, Zhong Chen, and Walter van Dalen.

At this point, Konstas had fallen back, with Peters drawing from his experience (he is 15th on the Dutch all-time money list, according to HendonMob.com) to push around the remaining players and move to the top of the counts.

Eventually, Chen moved all in preflop with ace-high and was up against the suited cards of Bart Lybaert.Lybaert went on to turn a flush in the hand and send Chen to the rail. He was followed by Wohlgemuth, whose pocket fours were cracked by the ace-queen of Peters that allowed the latter to extend his chip lead.

A flurry of bust outs came soon after, first as van der Venne’s pocket nines were cracked by the king-queen of Konstas.Konstas then managed to squeeze in another bust out before the dinner break, cracking Joris Ruijs’s pocket queens with pocket tens.

Those two scores meant Konstas went into the dinner break holding a slight lead over Peters, with van Dalen and Lybaert further back.

Lybaert doubled up on the very first hand after the dinner break, and the chip lead proceeded to move back and forth between Konstas and Peters nearly every hand.

Van Dalen headed to the rail in fourth place on a

board when his pocket aces came up against the king-queen of Konstas.

Another double followed for Lybaert, who made a good job of sticking around to secure third place in the WPTDeepStacks Netherlands  Main Event before finally departing at the hands of Konstas.

Konstas had Peters out-chipped at the start of heads-up play, but Peters managed to double up with ace-jack versus ace-ten to get back into the contest. However, several key pots changed the dynamic of the heads-up match, including Konstas managing to take down a sizable pot after check-raising the flop and turn before moving all in on the river. Peters folded a full house, face up, on a double-paired board.

Peters managed gamely to hold on, but after Konstas’ trip jacks handed him a commanding chip lead shortly before 1 a.m., he didn’t let go and managed to close out the tournament in the second all-in confrontation of the heads-up match. With that, Konstas took down the WPTDeepStacks Netherlands Main Event, €56,806 in prize money, and the Player of the Series title thanks to his impressive showing throughout the entire festival.

Next Up for WPTDeepStacks in Europe: Brussels, Belgium

Coming up next for the WPTDeepStacks tour in Europe is a trip to Grand Casino Brussels VIAGE in Brussels, Belgium, for a festival of events beginning November 6, 2017. Kicking off with the €400 Warm-Up event and featuring the €1,100 Main Event, the full WPTDeepStacks Brussels schedule runs November 6-12 and consists of buy-ins that range from €150, when you factor in satellites, up to €2,200 for the High Roller.