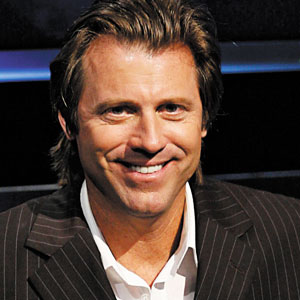 Success has come in many forms for the actor, producer, director, author, and former tennis player, Vincent Van Patten. The son of actor Dick Van Patten, Vince has thrived in all his endeavors through a winning combination of talent, ambition, and dedication.

As an actor, Vince launched his career at the age of 9, starring in a Colgate commercial. He went on to guest star in over three dozen classic television shows, including “Bonanza,” “High Chaparral,” and “Adam 12.” He also starred in such television specials as “The Bionic Boy,” “Gidget’s Summer Reunion,” and “Dirty Dozen III.”

Graduating from television to film, Vince appeared in a number of movies alongside such major actors as Kurt Russell and Charles Bronson. Prior to that, he starred in and co-produced the feature film, “The Break,” playing the role of Nick, a washed up tennis pro whose bookie (Martin Sheen) forgives his gambling debts in exchange for coaching his 17-year old son. Vince wrote and directed another feature film, “The Flunky,” starring Farrah Fawcett, Dean Stockwell, and Vince’s brother, James Van Patten.

For his work, he was awarded the prestigious award of Best Director at the Port Hueneme International Film Festival in 2000. Vince and his brother have also written a screenplay about a young poker player entitled “California Kid” which is currently with Universal Studios. Vince also co-authored the fictional poker novel, “The Picasso Flop,” with Robert Randisi, which hit shelves in February of 2007.

Beyond his achievements in the entertainment industry, Vince is a remarkably talented tennis player who competed professionally through the mid-1980s. At his peak he ranked 25th in the world, scoring wins over almost every major player including John McEnroe.

Vince’s passion for poker started at the young age of 13, when his father taught him how to play poker at the LA Tennis Club. Soon Vince was playing in side games in between tennis matches. By the time he turned 16, Vince had accumulated enough skill to play in his Dad’s poker game. One night on a winning streak, he played until 7AM, when he finally had to throw in the cards to go to school. Vince continues to play poker every week with his buddies in a pot limit game in Beverly Hills. He has tried his hand at the World Series of Poker three times, and brings solid experience hosting televised sports and poker broadcasts to the World Poker Tour.