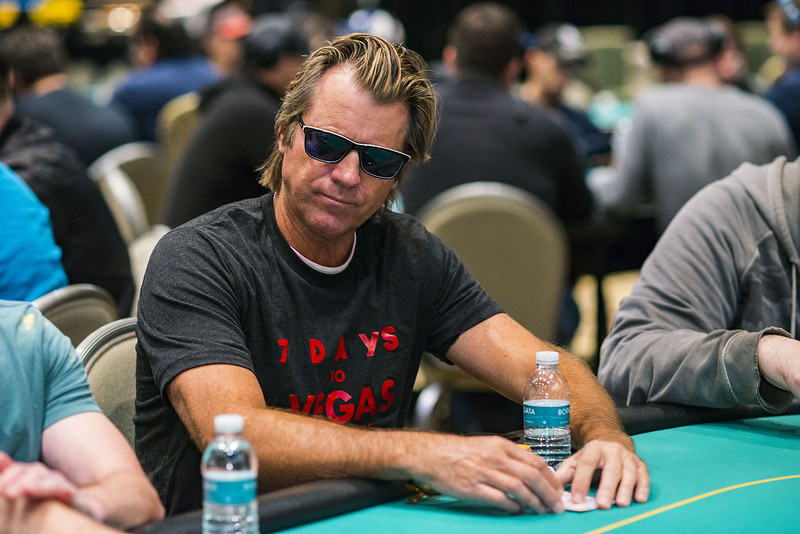 A deck of cards, some poker chips, and Ellen DeGeneres – that was the scene on Sunday for Vince Van Patten. The talk show star and comedian turned 62 on Sunday and plays poker regularly with friends. As a birthday gift, her wife Portia de Rossi asked Van Patten to sit in for a coaching session with DeGeneres.

Happy Birthday to my wife! I surprised her with a poker coaching session with none other than WPT’s Vince Van Patten! Thanks, Vince! @vincevanp_wpt @theellenshow

De Rossi posted a bit of the experience on Instagram and the session was even covered by People magazine. Van Patten spoke with WPT.com on Monday about the experience.

How did the poker lesson come about?

Portia, Ellen’s wife, wanted to surprise her with a birthday gift. They contacted me and said, ‘Would you be interested in giving a lesson? We watch the World Poker Tour all the time, we love the show.’ Ellen and Portia and a lot of their friends love poker so much. They play all the time. She’s good, and Portia just thought, ‘Can you possibly give a birthday gift for her, surprise her at her house.’

Was this more of an appearance for you or poker coaching?

It was really both. I came in around 11 a.m. to her house. I had never met Portia or Ellen. They had a beautiful table set up and they had a few of their friends over. We all got set up. We were playing and Portia brought Ellen in and it was, ‘Happy birthday! Surprise! And here’s the party – it’s Vince. He’s gonna give you a lesson.’ She loved it and smiled. She was wonderful. We sat down and played poker for about three hours.

They play all the time in the dressing room at Ellen’s show. They love poker and watch poker constantly. So I sat down and we got in a game. I proceeded to watch and give some tips and ask questions about what they wanted to learn.

How was Ellen as a player?

I was blown away by the level of Ellen’s play. She’s very good, very strong, very aggressive, and really has a fun knack for the game. She has a great poker face and buys a lot of pots. She’s the table captain, so I’m impressed by that. Her friends are getting pretty good and Portia’s a nice player as well. So the level is that of a nice social game, and Ellen has the potential I think of becoming as good as she wants to be.

What were the stakes and how did the game turn out?

Well, obviously we weren’t playing for money, but we were playing in chips of 5, 10, 20, and 50. So we bought it for ‘$1,000’ each – not playing cash. When I try to teach someone, I say we’re not going to play for real money. But you have to play as if you play for real money, otherwise, you won’t play well. That’s rule number one. They understand that.

So we played and it was a wonderful day, and the great thing about Ellen is that she knows how to get a laugh out of you. She knows how to get you talking. She has great table talk. Then I asked her questions when I was deciding to fold or not. She has great responses and is very tough to read. So overall, it was just a great time. It’s so nice that someone that talented is that involved in the game of poker. She really wants to move her game up.

Is there money on the line in those backstage games on the show?

What kind of tips did you give them?

My tips to her really were: I love her aggressiveness, I like her poker face, I like your table talking. Every little subtle tip about how to read people and how to put players on certain hands. Their variance with what their starting positions are. So all the basics, just to sharpen her up. But she knows a lot of this stuff.

Pricing – if you’re playing in a no limit game, how to really fine-tune that so that when you’re betting on the turn or the river you get the max out of it. And the reason why you’re going to overbet sometimes or underbet or min-deck. So those are the subtleties that she will even get better at.

I also brought her a little book of all of my tips. It’s all there, some of the humorous things and some of the tips and the dos and don’ts of poker. I left that behind for her so I can entice her. Because basically in the book it says, ‘I can get you to a point where you’re going to be a nice player. You’ll continue, and you’ll get better. Or do you want to jump it up and play with the big boys and world-class?’ I can get you there too – it’s that type of book.

Can you talk more about this book? Any chance to get it published?

It’s all the notes I’ve taken for years and all my tips, which I haven’t shared. It’s not a published book at this point. That may happen down the line. If I do a poker book, it’s going to be all my secrets, my ins, and outs of poker and gambling, how to gamble, and how to survive in the game and how to win, how to make it social and fun.

The overall thing is let’s keep you laughing and let’s keep it social. Let’s keep people coming back and enjoying it. So I want to put that in the book. I gave her a short version, 40 pages and a lot of pictures and stuff like that.

It was great. First of all, she makes it fun. She understands poker is a social game. It’s a battle of wits and it should be fun. She has fun playing poker. That’s all you can ask.

Did you try to talk her into come playing in a WPT event?

No. She’s a very busy person, so I’m sure she would let me know when she wants to step out here and play. But you never know.

You recently released the film 7 Days to Vegas. How did everything turn out?

The movie’s going great. It’s in video now, so it’s streaming on iTunes and Amazon. Then it’ll go on every different platform for the next six months to a year or so. But it’s doing phenomenally well. We’re the number one film for our distributor Gravitas, and they’re pretty big. So we’re kicking ass and it’s great. The backing and the commercials from the World Poker Tour and various articles and things like that really helped poker players and gamblers realize it’s out there. That’s a tremendous help. It’s that kind of movie that you can watch over and over again.