Dylan Rowe Demonstrates His Prowess to Take WPT500 Online Title and $181,544 in Winnings

It has been ten days of epic competition since the WPT500 Main Event began, and last night it all came together in a thrilling final that saw Kiwi Dylan Rowe arise from the middle of the pack to claim the title and all the glory that comes with it after an impressive display of skill.

Not only that but the final of the Super50 took place, as well as two one-day events concluding, which means a total of four title-winners emerged since the last instalment of the WPT500 news.

In addition, two of the biggest events of the series kicked off earlier this week. With so much to catch up on, let’s get right on to it…and there is no better place to begin than by looking at Rowe’s rise to the top last night.

Over a week ago, the $530 WPT500 Main Event kicked off and with nine starting flights to choose from, a total of 2,422 entries were counted, smashing the seven-figure guarantee and putting a final total of $1,211,000 into the prize pool.

On Monday 15 March, 361 players returned after making it through to Day 2. It took seven hours and 25 minutes for that number to be whittled down to the final nine, who came back to play the last leg of the three-day event last night.

Daniel Smiljkovic’s ($10,323) departure in 10th place brought play to an end on the second day. A great run indeed but the Austrian will likely still be feeling the disappointment of coming so close and yet so far to that elusive final.

That brings things up to date when the nine finalists sat down for their last chance to make an impact on the WPT500 main event FT. A huge portion of the $1,211,000 prize pool was still up for grabs and unbeknownst at the time, it would take just two and a half hours for the conclusion to be reached.

The action was fast-paced pretty much from the get-go, and David Singontiko ($13,801) was the first casualty. He lost the bulk of his chips with ace-jack against Aaron Been’s ace-king, then losing the last four big blinds with king-eight against eventual Champion Dylan Rowe. 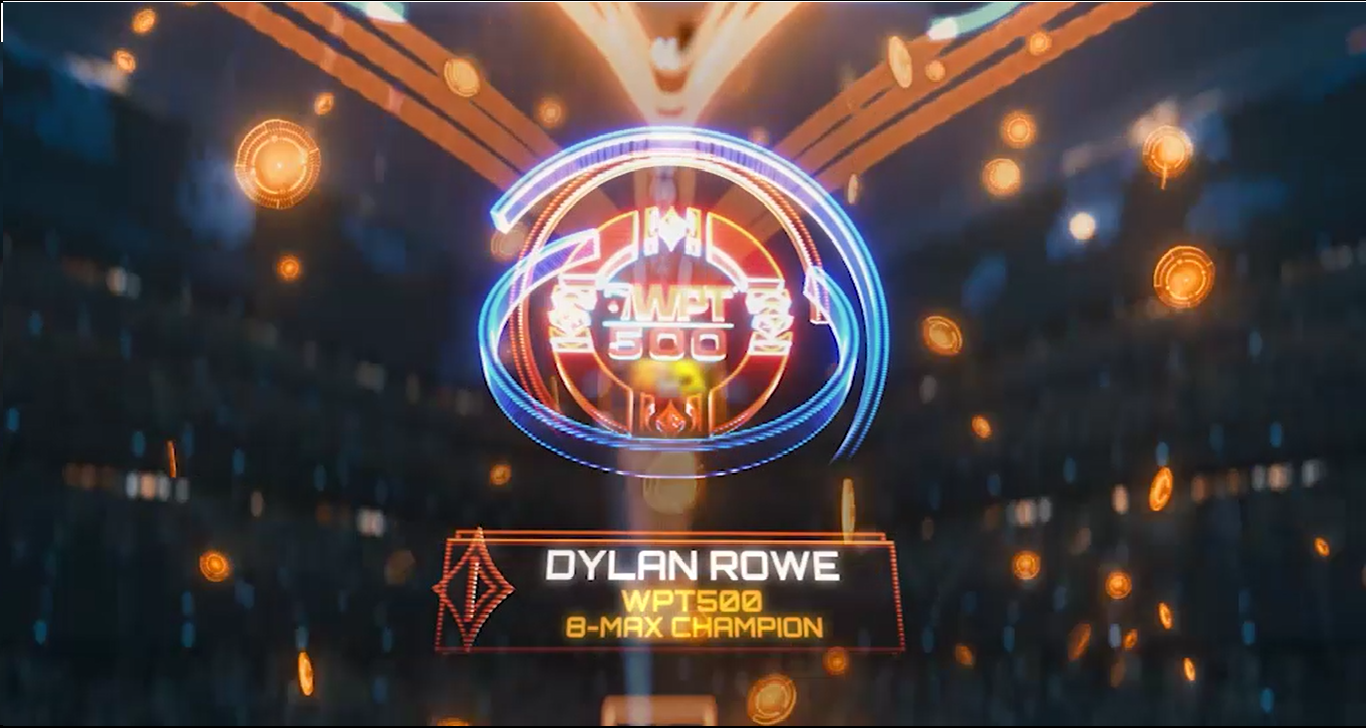 Stoyan Kitanov ($17,716) fell next and it was a huge cooler of a hand that involved the Bulgarian, Rowe and Deividas Kvaselis. Kitanov opened pocket-kings, and Rowe 3-bet ace-king suited before short-stacked Kvaselis jammed pocket-queens from the big blind. Kitanov tank-jammed over the top and with both players covered, Rowe overcalled. Two ladies on the flop locked up the main pot for Kvaselis, but there were also two clubs that gave Rowe a flush draw. The turn blanked but the river didn’t, leaving Kitanov out in the cold, while Rowe took the lead for the first time.

Another outdraw was the source of the next elimination and this hand also affected the chip lead with Andrii Novak reclaiming the top spot after getting there with pocket-tens against Brandon Adam’s pocket-aces. Adams ($22,357) did well to ladder two spots after starting at the back of the pack.

Been ($28,887) was the latest player to come unstuck and it happened just minutes after Adams’ departure. Been moved all-in for the second time in close succession, with king-nine suited and 12.5 big blinds, which was always going to be looked up by Lukas Wimmer’s ace-queen in the big blind.

That slew of action took play up to the first break. The remaining five returned and once again it wasn’t long before the action started up again. Pedro Padilha Chaves ($37,894) was the shortest and in the big blind with king-six when Rowe put him to the test from the small blind with eight-seven. Rowe hit a pair of sevens on the turn, sending the Brazilian to the rail.

Kvaselis ($55,719) was under the spotlight next and after gaining some very welcome ladders after spiking quads in the hand against Kitanov and Rowe, the Lithuanian had struggled to make much headway since. Down to around 15 big blinds, he shoved with king-five in the small blind, only to run into Novak’s pocket-aces in the big. The rest, as they say, was history.

That left three and Lukas Wimmer ($84,064) put up a good fight, even moving into second in chips at one point before his rollercoaster of a ride came to an end when he couldn’t get away from two-pair, bet-calling all in on the river when Rowe had turned a wheel straight on a rainbow board. 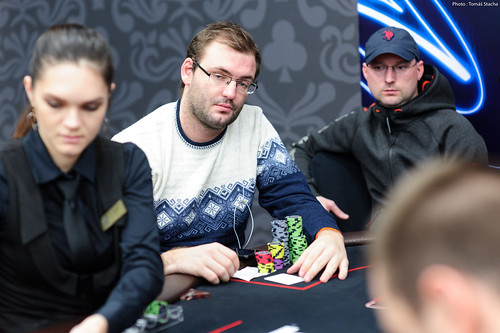 The finale was set, and it was start-of-the-day chip leader Novak, one of the most successful online representatives on the final table, who would go up against Rowe. The chip lead was huge at the start and the heads-up match was looking likely to be a short one. The Ukrainian managed to pull back some of the deficit, giving hope that he could turn things around but that turned out to be short-lived after Rowe correctly picked off Novak’s bluff with ace-high on a board with three queens, which saw him drop back down again.

The final hand of the night saw Novak raise all-in for his last 7.5 big blinds with jack-nine and Rowe’s king-four suited was ahead. The board held for the favourite and Novak collected a very healthy bankroll booster of $123,254 for placing runner-up, leaving Rowe to bank the title and $181,544 in winnings for going the distance.

Running alongside the Main Event was the $55 Super50, which mirrored its big brother in all ways except the buy-in. The quarter-of-a-million guarantee was easily surpassed after 6,589 registrations were logged, creating a pot of $329,450.

The three-day event also played down to a winner last night, with 24 players returning for the final day and there was some serious ROI up for grabs, with the top four places all five-figure paydays.

Joao Antonio Perez was first to bust, winning $1,005 for placing 24th. He was joined at the rail by some notable names in the world of poker, all proving what fantastic value for money the event offered, including Canadian regulars Julien Perouse and Timothy Frostad who won $1,379 apiece for finishing in 19th and 18th places respectively.

Welsh grinder Ceri Rees ($1,814), who had returned for Day 3 with a huge chip lead, was unable to progress past 12th place, while Sil Lukassen ($2,410) of the Netherlands bubbled a final table seat.

Fabiano Kovalski did well to progress to fourth, but he wasn’t the most successful Brazilian of the evening, as fellow countryman Maykol Jardim did what no one else could do – take the top spot, securing himself a huge return of $45,064 in the process. He prevailed after taking out basketball player turned poker grinder Samy Ouellani out to overcome the last hurdle. Ouellani, who was playing from the Netherlands, secured $30,233 for his result and narrowly missing out on adding a second WPT side event title in six months, after The Frenchman won the $1,050 8-Max back in September.

On Monday night, this one-day event took place and Dutch pro Michiel Brummelhuis turned $215 into $6,586 after besting the 179-entry field. Anton Sidén ($6,564) came closest to toppling him and the Swede won almost exactly the same amount, after the pair struck a deal heads up.

Last night’s schedule also offered a one-day event for poker enthusiasts to get their teeth stuck into. This one featured the popular knockout format and had a buy-in of $265. 130 players meant a $32,500 pot was generated by the time late registration closed. 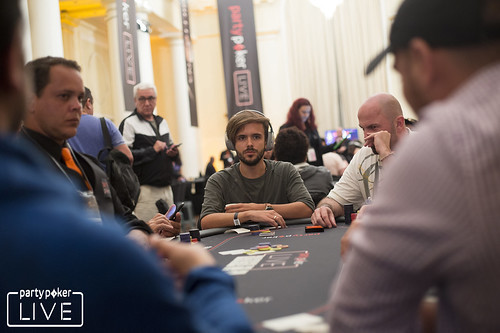 Another Brazilian was at the helm for this one too, with online star Yuri Dzivielevski picking off the competition until he was the last man standing. He claimed $7,824 of the prize pool for himself with his six knockouts accounting for $4,960 in bounties.

Mary Pudmoreff, who has made numerous appearances in the payouts lists already this series, took the runner-up spot and she won a total of $4,485 for her efforts.

While the main event and its mini counterpart may have come to an end, WPT and partypoker have introduced the Knockout variants to replace them, with Day 1a taking place on Monday and Day 1b on last night’s schedule.

The larger buy-in event of the two mirrors the main in all ways but one – it features a $530 entry, a $1M guarantee, a three-day structure, and blind levels are 12 minutes long. The only difference is that this prize pool has been sliced in half, with the main pot being distributed in classic fashion, while the other half is collected in the event a player eliminates a fellow competitor.

The tournament guarantees all Day 2 players will see a return for their investment, which meant Dominykas Mikolaitis bubbled in 40th place, although he did collect $125 in bounties before doing so.

Last night’s instalment saw Yuri Dzivielevski rise to the top of the chip counts, with the Brazilian’s form red hot after also winning the Mix-Max Turbo an hour before Day 1b concluded. He multiplied his stack by almost 15 times, and he made his three eliminations count too, with the biggest bounty winnings collected in the field. That puts him in profit even before taking into account the min-cash that is locked up for all Day 1 survivors.

Hungarian pro Benjamin Chalot took the second spot with an also impressive stack of 6,012,000 plus $875 in bounties. Meanwhile, it was the UK’s John Adderley who took the last podium place, after accruing 5,388,305 chips and $187 for busting one opponent.

Once again, the Super50 knockout is an almost perfect imitation of its big brother, only this event features a more accessible (for most) $55 price tag. Twelve levels were on the clock for this one too, which meant play was paused after four hours and 27 minutes.

A huge 1,010 players sat down to have a stab at Day 1a, and at the end of it the bubble had burst on Philipp Zeckai after he crashed out in 152nd place, failing to collect any bounties in the process.

The field was smaller in the second flight, with Day 1b still attracting 836 entries and bringing the prize pool to $92,300.

Britain’s Aaron Dyson (14,032,126) bagged biggest and he sits second overall at this point after David Greene. Max Jakob Clemens Hess (11,262,199) and Sergey Merzlyakov (10,442,791) finished up in second and third, but they haven’t done quite enough to make the top-five overall, despite eclipsing the 10-million mark.

All of these events will be covered in the next segment of the coverage, which will be posted here on Saturday.