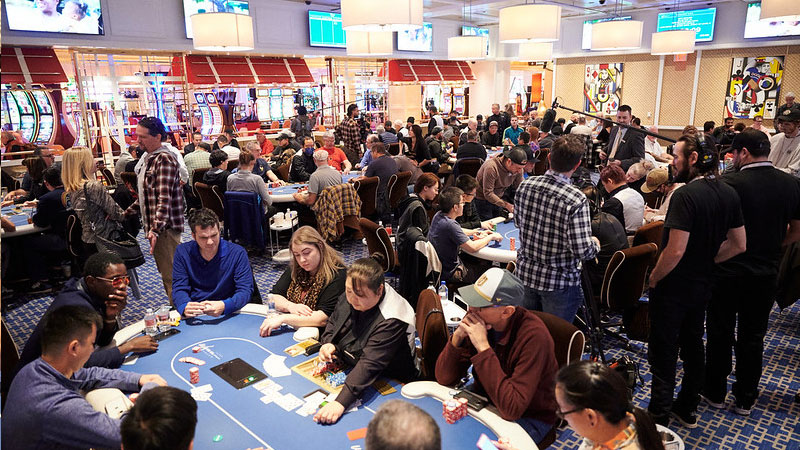 You messed up. If you thought about it but didn’t effort to make it to the Wynn Poker Room on Thursday morning for the WPT Premier Meet-Up Game, you missed one of the most thrilling cash game poker room experiences of the year.

“I’ve never been in a poker room with more energy than this, right now,” said Brad Owen. “This is called the Premier Meet Up Game and this is definitely living up to that. We have Doyle Brunson, Vince Van Patten, Phil Ivey, and the list of big names goes on and on. To be a part of this, to kick off the WPT World Championship at the Wynn is something special and I’m having a great time.”

You’d be forgiven if you didn’t quite believe the hype. In fact, just 30 minutes before the 10 am kick-off time, the Wynn Poker Room was, maybe, half full. There was, for just a moment, a passing thought of “where is everyone?” After all, this Meet-Up Game was going to be super-sized. MUG founders and modern-day poker superstars Andrew Neeme and Brad Owen were amplifying their energy with the likes of legends in Phil Ivey, Doyle Brunson, Patrik Antonius, as well as WPT ambassador DJ Steve Aoki and WPT talent Vince Van Patten, Tony Dunst, and Lynn Gilmartin.

However, any notion that this event was going to be anything less than a grand slam (or any other superlative sports analogy) was blown out of the water within an hour. Not only was the cash flying around as every table in the room filled up, but tickets to enter a raffle that was going to give away a seat to the $10,400 WPTWC to four different players were being handed out. Get all-in, for any reason, against one of the pros and a ticket to the raffle was yours.

“I feel like Santa Claus in the room,” said WPT anchor Gilmartin. “Just rolling up to tables and giving tickets. It’s just such a good energy vibe and as soon as everyone sees me coming they are like ‘Oooh! I got a chance to get a ticket!’ It’s electric.”

Electric. It’s a word you heard more than once about the event as it was happening.

“This is a pretty special event for sure,” said Neeme taking a short break from battling with fans. “We have a full room, every table in use. To get this many people together, and to get these superstars of poker together is very special. The vibe in the room is electric, there’s multiple cameras all over the place both from vloggers and professional equipment in use. It’s a special scene in here.” 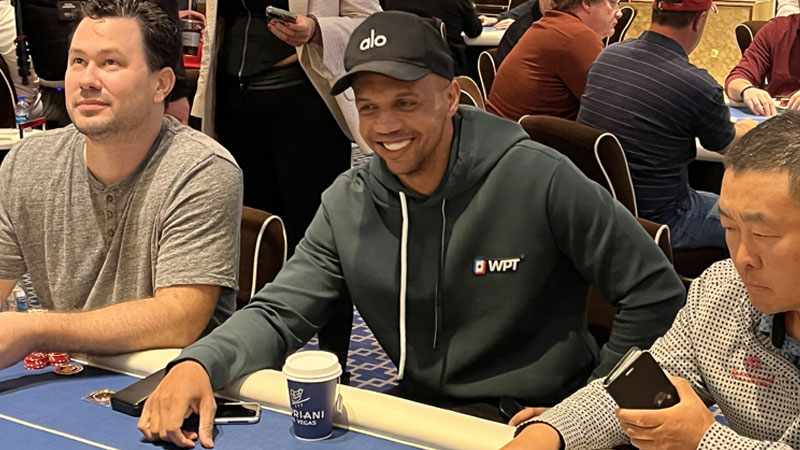 The scene in the room heats up when Ivey walked in the room. Announced by Matt Savage, when Ivey strolled up the tile into the heart of the room, every head at every table turned. In good spirits, Ivey was surrounded by staff as he made his way to his first table – a $2/$5 table where bought in for $500. Ivey sat down and the room got loud. People clamoring during all-ins, Neeme, Owen, and the likes shifting tables. The laughter and “one times” made it clear, this was more than a game, it was an event.

“I was thinking there would be maybe 8 to 10 tables. And Wynn has 28 tables, I didn’t expect it to be completely overflowing like it is now,” Gamble said. “It’s not so much for me about playing with Ivey and Antonius, it’s about being a part of the poker world. The vibe in here is amazing.”

The room was also home to some up-and-coming content creators like “Rob Stacks Poker” and “Suited Steph” (both on YouTube) who were filming their hands for future content, following in the footsteps of the pair who started it all.

However, nothing quite compared to the moment when Brunson arrived. When it was announced that Brunson was in the room, the players broke out in applause. Not polite applause either…enthusiastic, appreciative applause for The Godfather of Poker. Like Ivey before him, Brunson, swarmed by camera crews, saddled up to a seemingly random table and started playing at stakes 1/1000th the size of a standard Bobby’s Room evening. 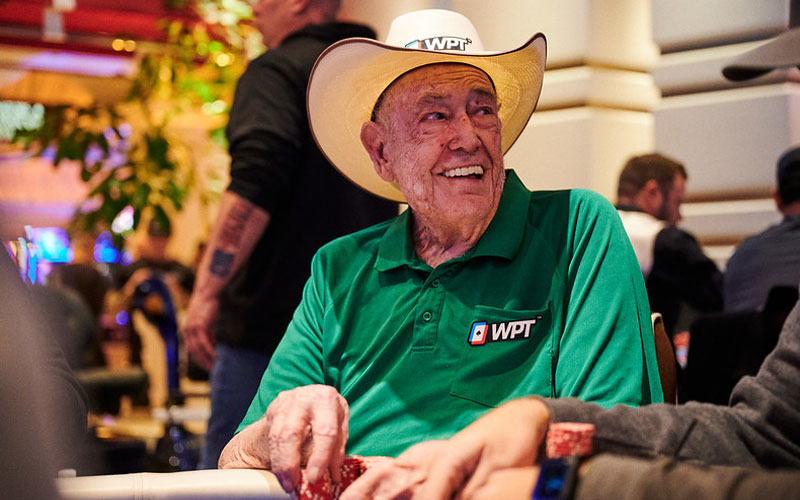 By noon, the event was in full swing. All of the ambassadors and guests, save Hellmuth, had arrived and found a rhythm of sitting down, getting it all in, and handing out raffle tickets. The pots were huge for the stakes and undoubtedly the stories that come out of this will be as big as well.

And talking with both Neeme and Owen one couldn’t help but get the feeling that while, yes, this is work, they were a little taken aback at just how far they’ve come.

“To go from filming things on an iPhone six years ago, playing small stakes to now building up this event with all these big names guys is incredibly special…it really hasn’t sunk in yet,” said Owen. “There’s so much going on at these things it’s hard to just take a second to enjoy it all. But once it’s all done, I’m really going to be reflecting on this and I’m so proud of what Andrew and I have built.” 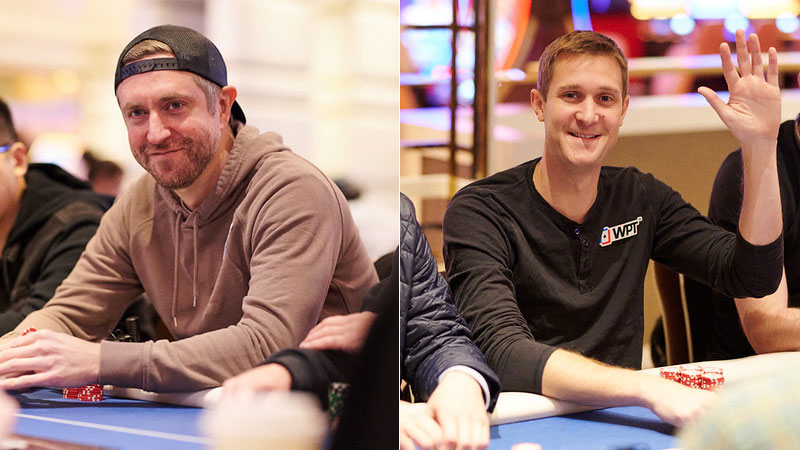 “There have been a lot of things that have happened over the last couple of years, especially this year that I could not have foreseen,” Neeme said. “It’s cool that we could link up with the WPT and mesh all these things together….it’s surreal for sure. Very cool.”

So, you see, you messed up. You should have been there.

You know who didn’t mess up? Las Vegas resident Katrina Weaver. Weaver took the day off from work to claim a seat. She mixed it up with Ivey in a hand she said was “exciting and a little intimidating.” Ivey raised the button with his pocket twos, she got it all-in from the small blind with her

and Ivey obliged. By the river, Weaver had made a straight, dragged the pot, and played a hand with the legend Phil Ivey.

“I won a ticket…and tripled up,” she said earlier in the day. While playing with Ivey was an experience for her, when asked what brought her to the MUG she replied. “The tickets.”

She took that very ticket, put it in the raffle, and two hours later she was one of four people pulled and gifted a $10,400 seat to the WPT World Championship at Wynn Las Vegas $15 million guaranteed event.

“I can’t believe it! If I didn’t win today I was going to play a satellite because I’m just a regular girl with a dream.”

Everyone had a reason for being there, and that’s what made the day such a memorable one. Even if they didn’t know why they were there. Local business owner and recreational grinder Joey Ellis hung out the entire four hours and never got a seat in the game. But that didn’t prevent him from summing up what he experienced.

“Sometimes you feel like poker is a little dead, then you see something like this happens and it’s very much alive and well. This atmosphere is incredible and everyone’s having a real good time – losing and winning.”

During filming for the World Poker Tour, the WPT crew spends a lot of time getting background and behind-the-scenes interviews to help give viewers an inside look at the WPT experience and the players and cast that make up the WPT family. With so much footage shot, there’s not always room in the TV episodes…

News Matt Clark Down to 16 in WPT Champions Challenge

Only 16 members of the WPT Champions Club remain in the first-ever WPT Champions Challenge bracket. Round 2 saw the departure of our first No. 1 seed, Carlos Mortensen, who fell to Erik Seidel in the Hearts Region. Gus Hansen (Spades), Anthony Zinno (Diamonds), and Daniel Negreanu (Clubs) all remain, and are all one match…

The World Poker Tour® will return to The Bicycle Hotel & Casino on Aug. 27, 2016, for the 15th edition of the famed Legends of Poker. The event has been part of each WPT® season dating back to the first, and we’d like to take a look at the WPT Legends of Poker through the years…