On Sunday night, WPTDeepStacks festivals got underway across all three 888poker networks. This exciting partnership of events will run through to the 25 April for WPTDS Iberia and WPTDS Italy and extend to the 26 April for WPTDS London.

The later finish of the WPTDS London festival is due to a longer structured two-day Main Event, that will see several starting flights take place. That is already underway, and the current top stacks can be found a little later on.

The last two nights, also saw a tournament on all three networks take place, with a Main Event and Mini offering for each, making a grand total of 12 event winners to celebrate so far.

That is a lot of silverware to cover, so let’s get right on to it. First up will be the four new WPTDS London winners, followed by the four WPTDS Iberia titleholders, and finally the four WPTDS Italy winners. You might want to strap in for this one!

This $525 monster event kicked off the proceedings on the ROW network on Sunday evening. The $200,000 prizepool was contested by 357 players (including re-entries) and it took 8 hours and 35 minutes for the event to play down to a winner.

In the end, i2out rose to the top, collecting $40,540 for seeing off all the competition. The Austrian secured the top spot after eliminating Brit Tedson89 in second place ($29,300), leaving Torresfan03 ($21,300) – who was also playing from the UK – to pick up a bronze position for their efforts.

The Mini event smashed its guarantee, with 1,373 entries counted overall in the $55 event. Sweden claimed the top spot, with Svampnacke winning $10,030 and the only player to lock up a five-figure score.

Runner-up finisher Blahaj came closest to toppling them, but the Romanian fell at the last and banked $7,331 for second place. The last podium spot was claimed by Brit welshdrago48, whose deep run was worth $5,389.

Last night was progressive knockout night across all three series. Each network had a main and a mini event to choose from, offering players a choice of a $320 event or a more modest $55.

The main for WPTDS London saw and eight-and-a-half-hour battle commence, with 292 buy-ins logged, each one worth $320. The battle lines were drawn at the end with Farrugia_1 of Malta facing off against Canada’s 2sick2bluff.

Finland’s Kyosti_l landed a third-place finish for a total prize of $8,585 with $2,600 of that haul came via eliminations.

The $55 mini event attracted 834 entries to the virtual felt, putting $41,700 into the prizepool and easily surpassing its guarantee.

888 Ambassador Vivi Saliba also made it into the top five and collected $1,523 for making it to 5th place.

The first starting flights have now taken place, which means the bar has been set for all future hopefuls in the flagship event of the festival.

okokok1893, who has already has some success after placing 4th in the Mini Opening event, is the closest rival at this point with 174,568 (87 big blinds). Kelvin_kerbe is sat in third place with 151,127 (76 big blinds) but of course, that could all change as more Day 1 flights take place.

There are still six more Day 1 opportunities (one each day between 20-25 April), so if you would like to get involved in the action, it really couldn’t be easier. There are also a ton of satellites running each day, with the possibility of spinning a Main Event ticket up from a freeroll! Head to 888poker.com for more details. 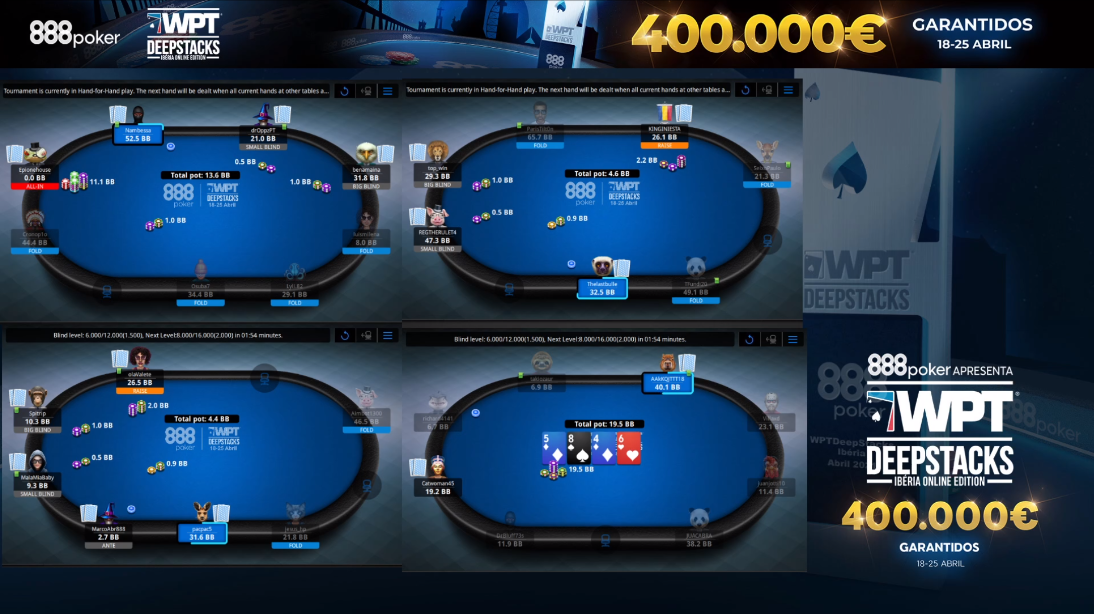 The €125 event started off the second festival, and 684 entries and re-entries combined to play for a share of the huge €100,000 prizepool.

With so much at stake, the competition was fierce, but in the end, it was Dra.Piernas who walked away with the top prize of €17,300, after defeating mercibeaucop (€12,620) heads up to take the title and trophy.

TopoDancero had a great run too and their third-place result was worth €9,220.

The mini event cost $33 to enter, and once again the guarantee was eclipsed by the time late registration closed with 588 entries and rebuys contributing to a final prizepool of €17,640.

When all was done and dusted, Portugal’s dominance in the event was apparent with all the top five spots being secured by the nation.

The larger buy-in of the two PKO events in the WPTDS Iberia festival cost €109 and 184 players (including re-entries) meant €18,400 was up for grabs for those who reached the money stages.

The finale came down to a heads-up match between TFundi20 of Portugal and Toneli223 of Spain. With an identical main prizepool payout locked up for both players, it would all come down to the final bounty.

TFundi20 navigated the final hurdle to bank €3,840 in total, while Toneli223 collected €2,273. The last top-three position was claimed by Kenjataimu and netted the Portuguese €1,269.

On to the final of our Iberia events and it was the Mini event. Spain took their first title of the series with Royei the victor of the 403-strong field. The €22 buy-in meant a pot of €8,060 was in play and Royei took the biggest share adding €1,539 to their bankroll, significantly more than any of their competitors.

Sr.Nunesbet finished in second place for €881 and aitite took third for €549.

For the Italian network, the €220 Italia Opening event drew a crowd of 276, which mean a total pot of €55,200 in play. Over the course of seven hours and 16 minutes, the field was whittled down, until just one player remained, and that was pesceSqualo. They took the only five-figure sum up for the taking with €11,189 banked.

Second place was taken by KingEras91 who won €8,086 for placing runner up. Meanwhile, umoscovait was the third-place finisher and netted €5,878 for his result.

Another Mini event, another guarantee smashed. This time €13,800 was generated via the 276 total entries, in the $55 competition.

This was a closely fought one and the last two players opted to do a deal that saw Jiollyer take the title and the trophy, as well as slightly bigger cash prize of €2,626 compared with runner up raffa_N5’s winnings of €2,415.

The deal meant that the top two finishers collected around €1,000 more than third place, with 8Trinita8 banking €1,524 for their efforts.

ASARCOSiii and Mangit97 squared up at the end, with ASARCOSiii going all the way and banking €4,924 (including €2,921 in bounties), more than €2.2K more than Mangit97 locked up for second place.

Carmattelo also fared very well, taking home the bronze medal and a total of €1,519 in cash.

One of the smaller buy-ins across all three networks was the €22 Mini PKO event that took place last night. By the time late registration had closed, 265 entries had jumped in to play.

As is standard in bounty events, it all came down to the final knockout to determine who would walk away with the lion’s share of the winnings. Leoc1997 did just that, taking €1,057, which was 20 percent of the €5,300 prizepool. €583 of that was from eliminations.

There are three High Roller events and their mini counterparts all kicking off this evening at 18:00 GMT. All of them are one-day events and have a 12-minute blind structure.

The Mini High Roller will cost $215 and has a huge $75,000 guarantee of its own. Three rebuys are available, once again offering players the chance to refresh their 20,000-chip starting stack.