The third WPT Russia tour has now come to an end after the final four events of the series rounded off ten days of poker action here at the beautiful Casino Sochi.

Hundreds of players rocked up to the Krasnaya Polyana region of Russia, ready to play some cards and last night the final four winners emerged – most notably the latest WPT Russia champion – as well as the titleholders in The Closer, Bounty Hunter and Omaha Bounty Hunter.

The flagship event of the entire festival attracted 251 entries including re-entries and had a ₽245,000/$3,328 buy-in. Yesterday just six players remained, and they returned to play down to a winner at 12 pm. The action was fast and furious as each player did their best to win as big a share of the ₽54,247,551/$726,832 prize pool as possible.

As it would turn out, only three and a half hours were needed for the start-of-the-day chip leader Maksim Sekretarev to convert his advantage into a win and take home the $160,694 top prize [conversion rate correct on xe.com as of 27 February]. 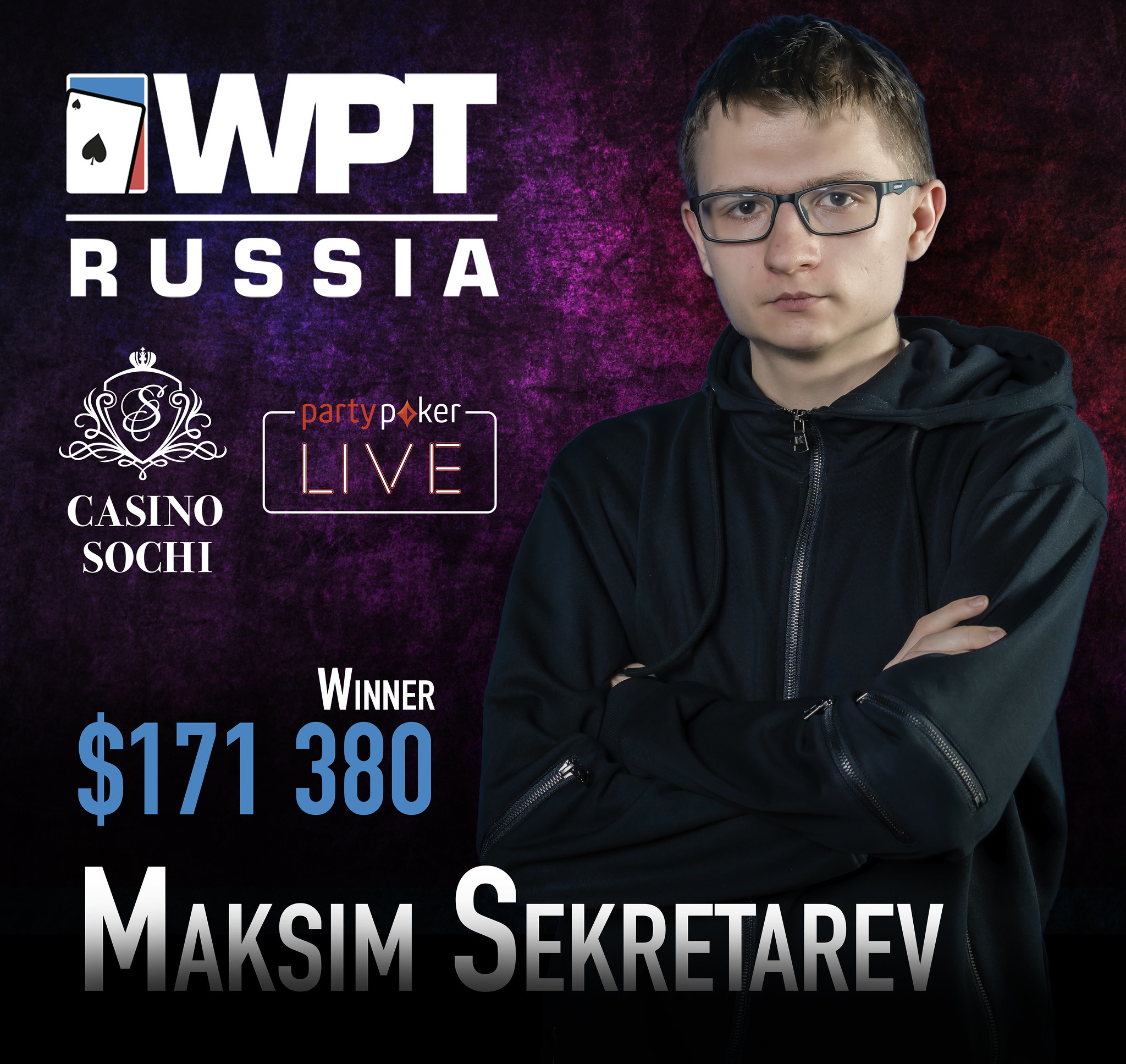 [Conversion rate correct on xe.com as of 28 February]

The nineteen-year-old has become one of the youngest players to enter the WPT Champions Club and to have his name etched on the iconic Mike Sexton Champions Cup. However, it wasn’t all plain sailing for Sekretarev with his journey to the top featuring a few twists and turns along the way, even dropping to the bottom of the chip counts at one point.

Rolling back to the start, and Sergey Bobrik was the first to depart. He began 5th in chips but an early double from table shortie Vanush Mnatsakanyan, saw the two players switch places in the chip counts. Half an hour into the final and it was all over for Bobrik after correctly calling pocket-nines following an open from Andrey Volkov, and a jam from the chip leader who was attempting to apply pressure with king-six. Sekretarev hit a king on the flop and Bobrik couldn’t recover. He banked ₽2,477,300/$33,183 for his result.

Mnatsakanyan was next to leave after successfully laddering one spot and improving on his position at the start of the day. His elimination came in two stages. First, he lost some chips attempting to bluff Sekretarev with king-high on a low-ball board on the river. Sekretarev picked if off, calling correctly with ace-high. Minutes later Mnatsakanyan got the last of his chips in after three-betting with king-jack suited and calling the other half of his stack when facing a four-bet all in from Sekretarev who had ace-queen suited. Mnatsakanyan collected ₽3,249,750/$43,530 for 5th place.

Vladimir Bozinovic, the only WPT Champion left in the competition hit the rail next, winning ₽4,325,650/$57,942 for 4th place. Down to just five and a half big blinds at this point, the Serbian open-stacked with king-jack and priced in to call, Sekretarev was once again the eliminator after spiking a wheel straight by the river with his king-five holding.

The first three eliminations happened in close succession but play slowed significantly when it became three-handed. At one point, Sekretarev dropped to the back of the pack but his fortunes changed after a tournament defining flip between his own ace-queen and the pocket-jacks of Ravil Khamatgareev, saw him eliminate a fourth opponent and determine the heads-up line up at the same time. Khamatgareev fetched a payday of ₽5,840,450/$78,232 for his deep run.

Down to two and, only Volkov now stood in Sekretarev’s way. He settled in to play the last leg of the event, which as it turned out would only last 15 minutes and four hands. Sekretarev had utilised his aggressive playstyle to great effect throughout, however, on the last hand he opted to limp the button with king-queen and induced a 25 big blind jam from Volkov, whose ten-eight was dominated.

The rest as they say is history, with Volkov’s elimination securing Sekretarev the Championship. Volkov’s runner-up position was worth ₽7,998,200/$107,135 – and he scored the only other six-figure payout up for grabs.

A huge congratulations go out to all the finalists but in particular to Sekretarev who not only becomes the latest WPT Champion, but the youngest player to win a Main Tour title on Russian soil.

Want to catch up on all the final table highlights? A comprehensive summary of the FT can be found via the live updates page. 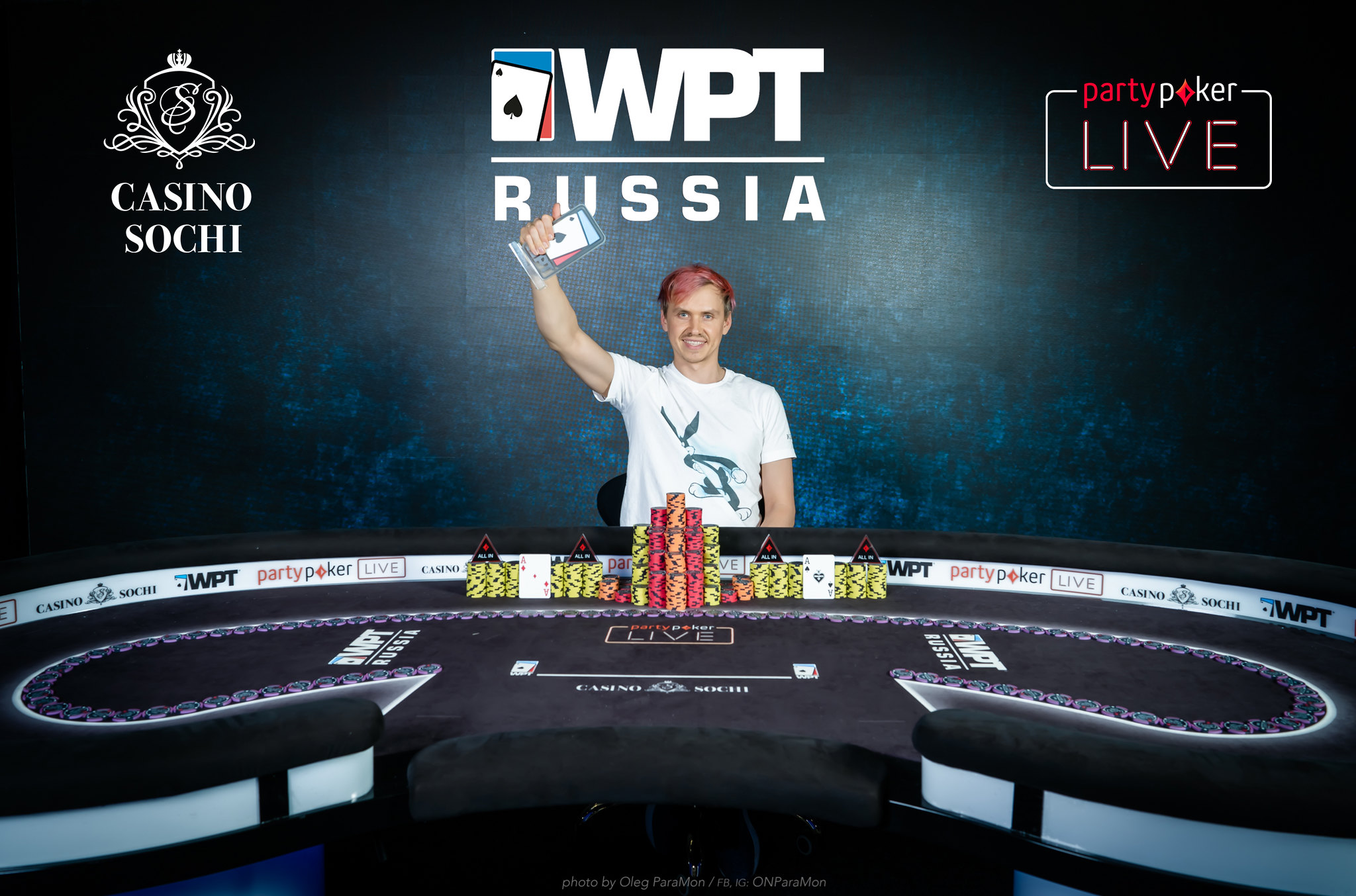 Of those 52 made it through to the final day and over half were able to navigate their way to the money stages, with 29 places paid. Maksim Vichuzhanin was the last person to leave empty-handed, missing out on the ₽116,200/$1,554 min-cash.

Once safely in the money, the eliminations came in quick succession with notable finishers including the likes of Sergey Petrushevskiy (28th) and WPT Russia 2020 Champion Aleksey Badulin (26th) both making a min-cash.

Arman Atshemyan’s (₽566,650/$7,647) elimination in 7th place, locked up final table results for the remaining six players. Andrey Gladyshev busted in 6th place and he was the last player to leave without a five-figure score.

Aleksey Samkov took 5th place, while Eduard Barsegyan – who started the day as chip leader – made it as far as 4th place. When Aleksandr Tomovic was eliminated in 3rd place, Gleb Tremzin and Mikhail Zavoloka took a break before settling in to play heads up. The former ultimately finished in second place, with Zavoloka taking the title and the lion’s share of the prize pool with a $47,030 payday. 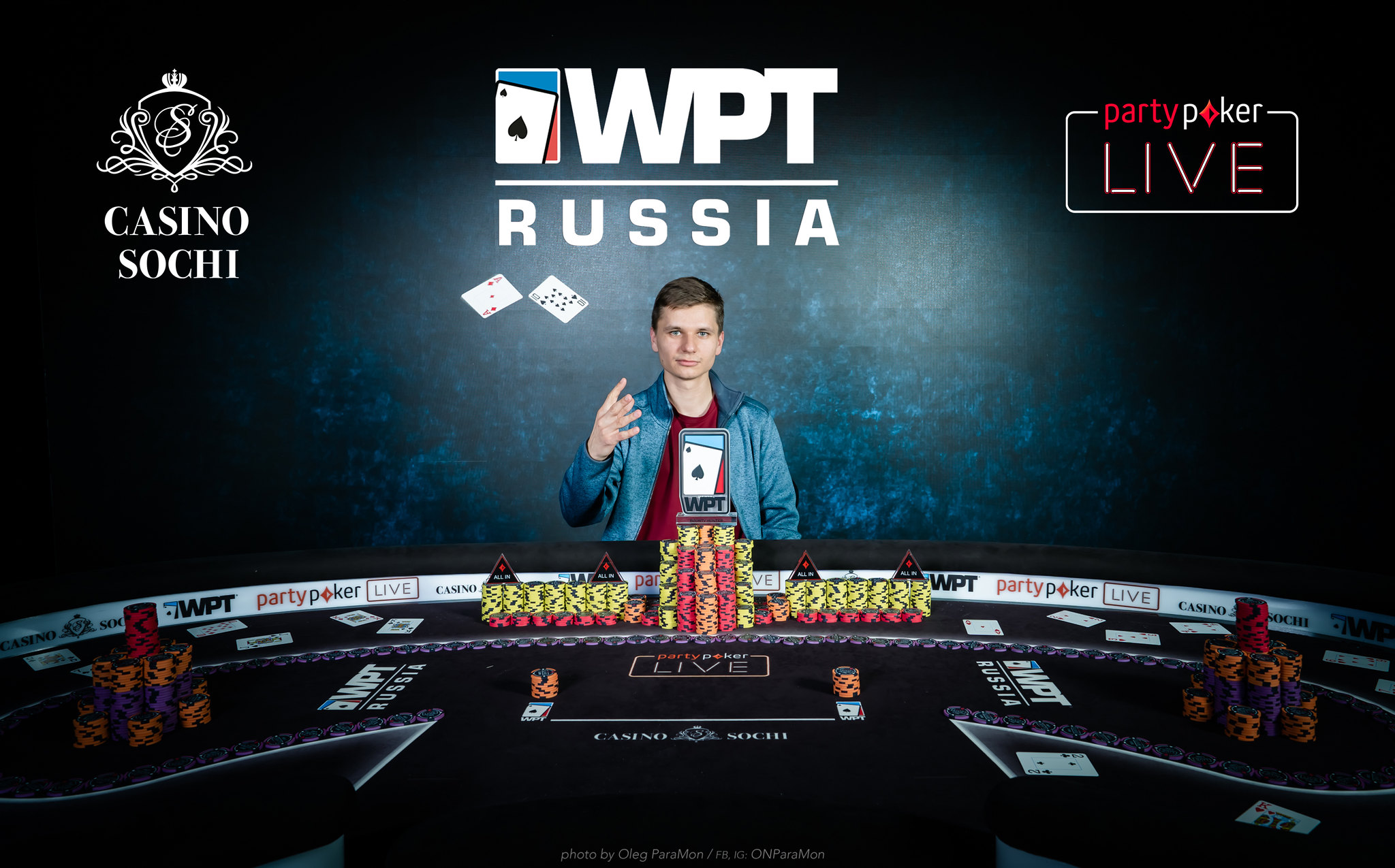 Two bounty comps were on the schedule to round up the day, and indeed the entire series. The first featured a NLHE format and a buy-in of ₽38,500/$519 and started at 1 pm local time.

Thirteen places were paid, with Alexey Vandyshev falling on the bubble in 14th place. 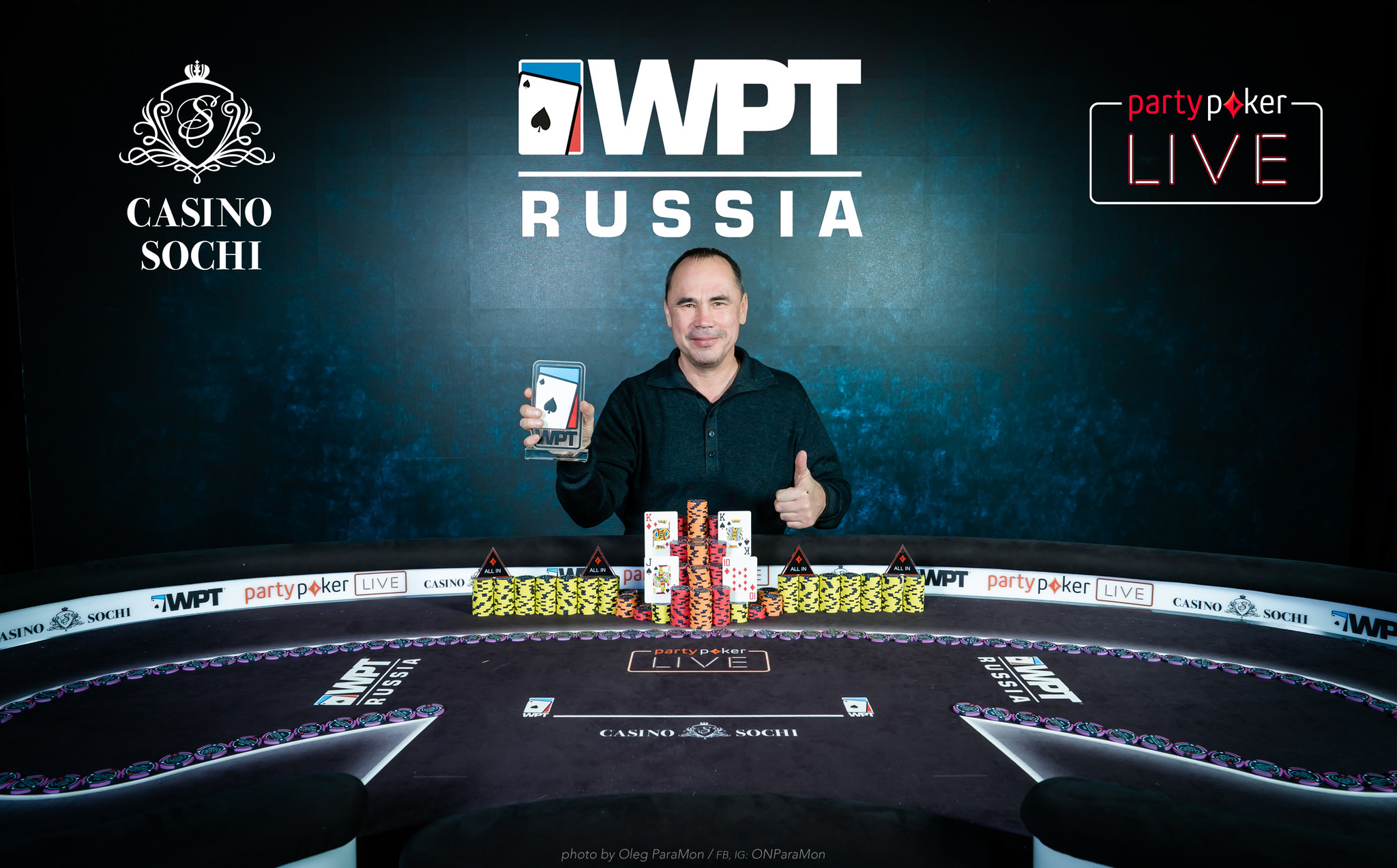 The Omaha Bounty Hunter had the same price tag (₽38,500/$519) but it was a much faster-paced affair with 15-minute levels in play.

He defeated Nikolay Dementiev (₽194,250/$2,621) heads-up and the pair shared the same amount of the main prize pool, with bounties counted separately.

With only six places paid, all the final tablists saw a return on their money, while Rinat Bogdanov missed out on both, bubbling in 7th place. The WPT Venice Grand Prix 2012 Champion was in good company at the rail though, busting right after Garik Tamasyan’s departure in 8th place.

That is all from the WPT reporting team as we thank you for tuning in to another thrilling event in Russia.

Next up is the WPT500 online series, which will kick off this Sunday 7 March – with coverage starting from Monday 8 March – so there will be plenty more poker to keep you enthralled in just a few days’ time.

* Prizes stated do not include bounty winnings.