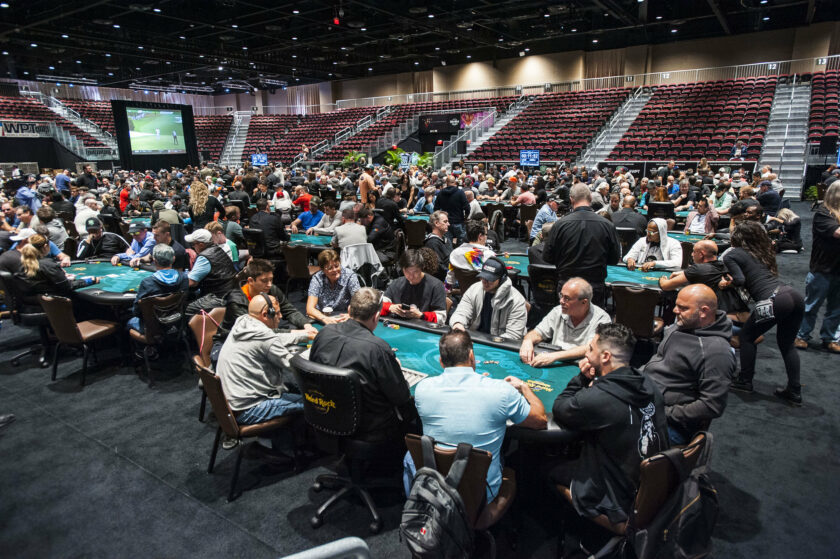 March 17, 2022 – After World Poker Tour Season XX kicked off with the 2022 Lucky Hearts Poker Open at Seminole Hard Rock Hotel & Casino in Hollywood, FL, the Main Tour returns to Hollywood for another major event — the Seminole Hard Rock Poker Showdown — with an eye towards repeating its record-setting numbers from 2021.

Just last year, a staggering 2,482 entries – the most ever for a WPT Main Tour title – generated a prize pool of nearly $8 million. In the end, then 32-year old ICU nurse from Michigan Brek Schutten was the last player standing and took home a career-high $1.26 million score along with enshrining his name on the Mike Sexton WPT Champions Cup.

This year, there’s no reason not to expect another massive Main Event turnout. The $3,500 buy-in tournament boasts a $3 million guarantee and gets started with two starting flights on April 8 and April 9. The player-friendly structure has everything a Main Tour stop is known for including 60 minute levels, 50,000 chip starting stack (200 bb), and late registration open until Level 9 (approx. 9:15pm). Additionally, unlimited re-entry will give players plenty of opportunities to advance to Day 2.

When the event reaches its final six players, play will be paused and the players will bag their chips and head to Las Vegas where they will reconvene on May 25, 2022 at the HyperX Esports Arena in Las Vegas. It’s there that this year’s winner will be crowned on the televised final table.

In addition to being shot for TV, fans from all over the world can catch the broadcast of the final table on WPT’s Facebook, YouTube, and Twitch channels, as well as the WatchWPT app and ThetaTV.

More than the Main Event

If there’s one thing that the Seminole Hard Rock Hotel & Casino is synonymous with, it’s action. In addition to the $3,500 WPT Poker Showdown Championship, this year’s incredible SHRPO schedule runs from March 24-April 12 and offers players a total of 50 events to take a shot in. It’s an eclectic schedule that should entice players at every level with buy-ins for major events starting at $200 and ranging up to the $50,000 Super High Roller, an event that will likely attract the elite players in the game of poker.

The $2,200 Deep Stack with $200,000 guaranteed on April 7 can serve for a good warm-up before the Main Event. After that, the first of a pair of high rollers as the popular $25,500 buy-in with $1 million guaranteed will bring out the stars.

There’s a reason that the World Poker Tour keeps coming back to the Seminole Hard Rock in Hollywood, Florida and that’s because the property and poker room makes this stop one of the East Coast’s best destinations.

In addition to the 45-table poker room and non-stop action that keeps the casino lively, players have access to some of the best beaches on the Florida coastline including the white sands of Hollywood Beach and its famous 2.5 mile boardwalk packed with cafes and restaurants to be enjoyed during down time.

Undoubtedly, the WPT Seminole Hard Rock Poker Showdown Main Event will also play a major factor into the WPT 2022 Player of the Year.

Currently, WPT Lucky Hearts Poker Open champ Alexander Yen sits at the top of the leaderboard with 1400.00 points, however, whoever makes it to the final table and ends up adding this major title to their poker resume will automatically be thrust into the race. And with the Main Event field likely to one of the tour’s largest of the year, it might just be event that proves to be the difference maker.