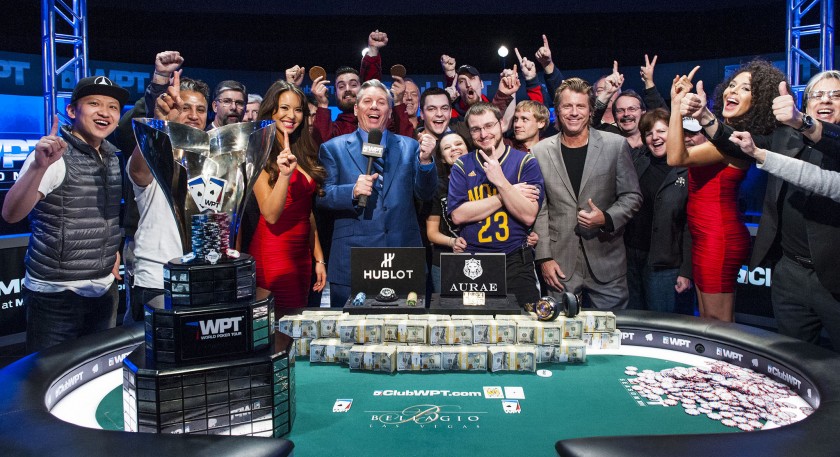 After nine hours of play on Saturday at Bellagio, Kevin Eyster was the last player standing in the WPT Five Diamond World Poker Classic, earning his second WPT title, more than $1.5 million, a seat into the WPT Tournament of Champions, a pair of Monster 24K headphones, a luxurious Hublot Oceanographic 4000 watch, and an Aurae Solid Gold MasterCard with $10,000 funded on it and Executive Lifestyle benefits.

Eyster won his first title at the WPT Seminole Hard Rock Showdown back in Season XI, and he now holds $2,325,142 in career WPT earnings. Eyster also took the lead in the Hublot WPT Player of the Year race with 1,525 points. Cate Hall finished in fifth at the final table and is now in second place in the POY race with 1,500 points, and Jake Schwartz moved into a tie with Stan Jablonski for third place with 1,450 points when he busted in fourth.

* First prize amount includes a $15,400 seat into the season-ending WPT Tournament of Champions.

On the 14th hand at the final table, Eddie Ochana moved all in under the gun for 490,000 with K-J, but Jake Schwartz called to cover him from the big blind holding A-J. The board bricked out and Ochana was eliminated in sixth place, good for $226,238 in prize money.

The next all-in confrontation saw Bill Jennings double up at the expense of Ben Yu, and then the biggest hand of the tournament up to that point went down. The two big stacks rumbled when Kevin Esyter got all in preflop with pocket aces against the pocket queens of Schwartz. The board changed nothing, and Eyster took the chip lead after winning the massive pot.

On Hand #39, Cate Hall’s pocket fives were up against the A-7 of Yu, and the board delivered two more sevens to give Yu the pot. Hall was eliminated in fifth place, good for $291,320 as the last woman standing in the tournament.

Schwartz then tripled up, and Jennings doubled up twice to keep the action four-handed. It was on Hand #75 that Schwartz was all in preflop with A-10 and he had the A-4 of Yu dominated, until the board ran out K-7-4-6-Q. Schwartz was eliminated in fourth place at the hands of a bad beat, and he took home $412,187 in prize money.

Three-handed play then pushed well past 100 hands as Eyster and Yu both scored a double up before the next elimination. Finally, on Hand #149, Yu was all in with K-Q and Eyster had him covered holding pocket sixes. The pocket pair won the race, and Yu was eliminated in third place, earning $607,433.

The chip counts at the start of the heads-up final were close to even. Eyster held a slight lead with 9,875,000 over the 9,300,000 of Jennings, and the final two players traded chips back and forth for more than 30 hands before their first and only all-in confrontation.

, Jennings checked, Eyster bet 600,000, and Jennings called. The turn card was the

(two pair, aces and fours), and Jennings turned over

for a lower two pair, nines and fours. Jennings needed to improve to stay alive. The river card was the

, and Eyster won the pot and the title. 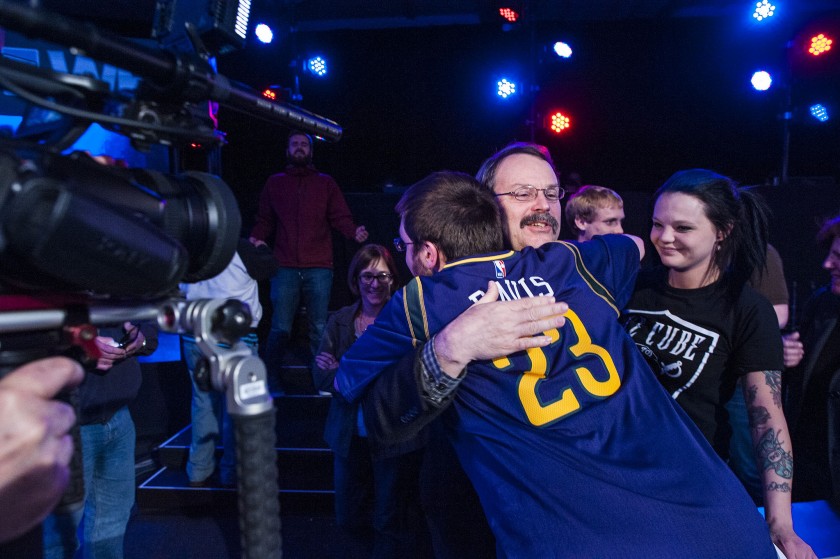 Eyster is champion of the Season XIV WPT Five Diamond World Poker Classic, earning $1,587,382, a pair of gold Monster 24K Headphones, a Hublot Oceanographic 4000 watch, and an Aurae Solid Gold MasterCard with $10,000 loaded onto it and Executive Lifestyle concierge benefits for one year. This is the second WPT title for Eyster, who joins an elite group of two-time champions.

The 2016 leg of Season XIV kicks off with a stop in Atlantic City, New Jersey for the WPT Borgata Winter Poker Open from January 31 – February 5, 2016.