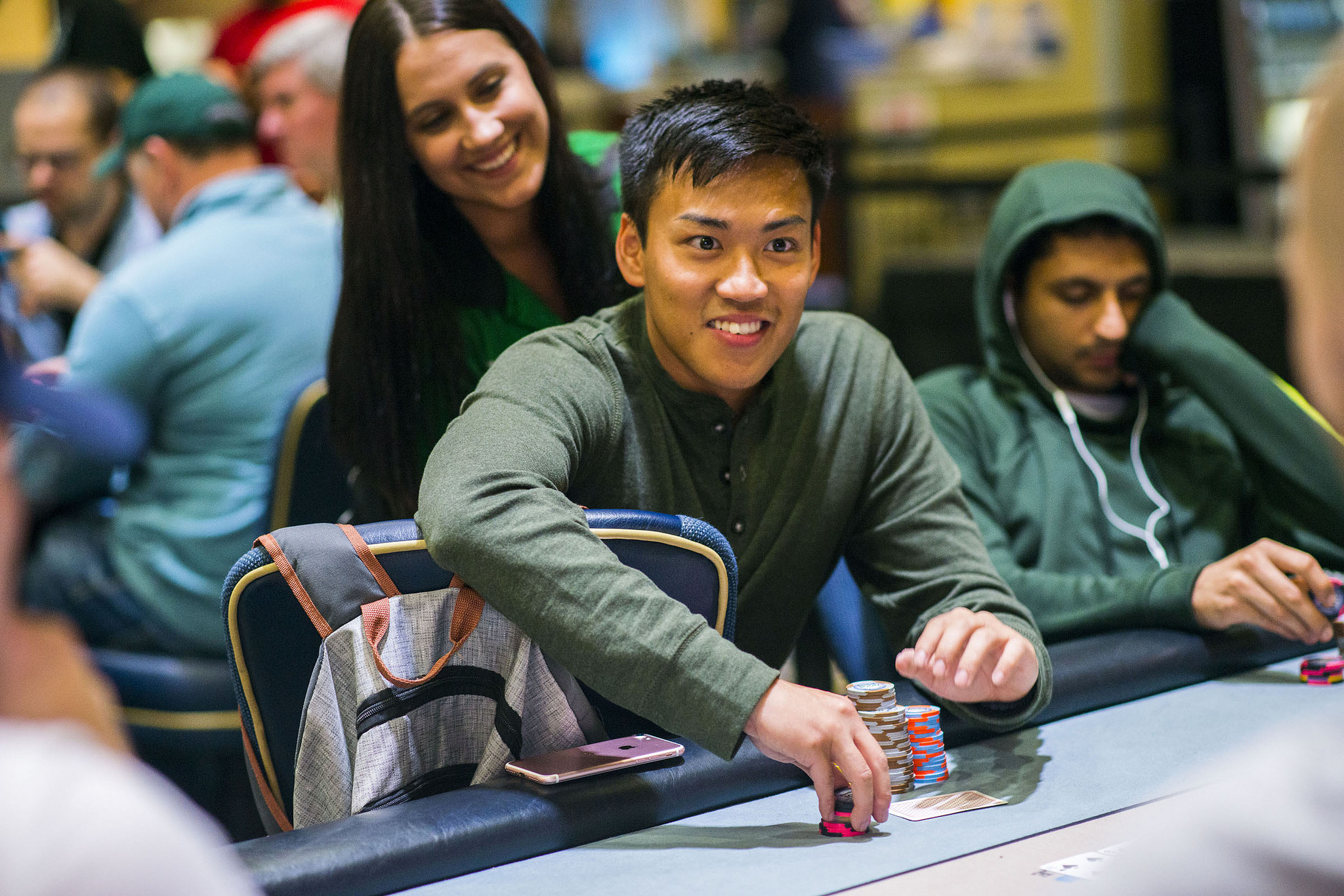 Day 1a of the Season XVI WPT bestbet Bounty Scramble Main Event played out on Saturday with a field of 149 entries diving head first into action. Following the first 10 one-hour levels of play, the field was whittled down to 53 players with Tan Nguyen (pictured) and his stack of 228,600 in the lead.

Nguyen, a 22-year-old player, earned the $5,000 chip leader bonus that bestbet Jacksonville set up to award the chip leaders of the two opening flights in the tournament. Nguyen was born in Tampa, Florida, but raised in Jacksonville all of his life, so he refers to its his hometown.

“It went well,” Nguyen told WPT.com about his day. “Besides Sean [Winter] doubling up through me, it went really well. I had a lot of cards, my bluffs went through, and my value bets got called. It was a great day.”

Nguyen’s stack steadily progressed throughout Day 1a, and every time a reporter checked in on him, he had a bit more chips than last time. Heading into the dinner break, he had around 140,000. Despite the constant upward trend, Nguyen flew relatively under the radar, although he did recall one bluff that worked out in his favor.

“I feel like there was a big hand, I just don’t remember it,” Nguyen said about his day. “At the very beginning, I made a bluff, which was probably kind of bad, because I saw the guy’s hand later. I called a four-bet because I was just screwing around with a queen-jack. It came king-eight-three, and I called the flop, which was pretty bad. The turn was an ace, I just barreled it off, and he folded. So that was a big hand there, and it obviously changed everything.”

Finishing in seventh overall on the end-of-day leaderboard was 2015 World Series of Poker Main Event champion Joe McKeehen with 145,100, and then other successful days were had by WPT Champions Club members Daniel Weinman (84,400) and Ryan Riess (76,500).

Plenty of players fell by the wayside on Day 1a, including one of the bestbet bounty players, James Calderaro. Calderaro’s day saw him try to bluff with eight high against Derrick Cutler’s trip aces before he busted with about 10 minutes left to go in the day.

“It was actually a really sick day,” Calderaro told WPT.com. “I ran it up to 240,000 over there [at my original table], and then I bluffed a huge pot that you couldn’t wait to write about, with the three aces, which I’m supposed to win, by the way. But it was no big deal. I still had 180,000. Then I came over here [to a new table], and got the sickest beats, four hands in a row. I mean just ridiculous beats, four hands in a row. They just snapped off every single hand. They were way behind in every single hand until the river. Bang! River, bang! River, bang!”

Calderaro mentioned that hearts played a big role in his day, and he got into a little more detail about it.

Despite all of the wrong things that happened, Calderaro had a chance to spin his stack back up, but ultimately things didn’t go his way.

Not to be deterred, Calderaro told WPT.com he will “absolutely” be back for Sunday’s Day 1b, so we’ll see him then.

Day 1b kicks off at 12 p.m. local time at bestbet Jacksonville, and another 10 one-hour levels of play are in the books. More $2,500 bounties will be fought for, big hands will clash, and chips will fly. You can find all the action right here on WPT.com, so stay tuned.