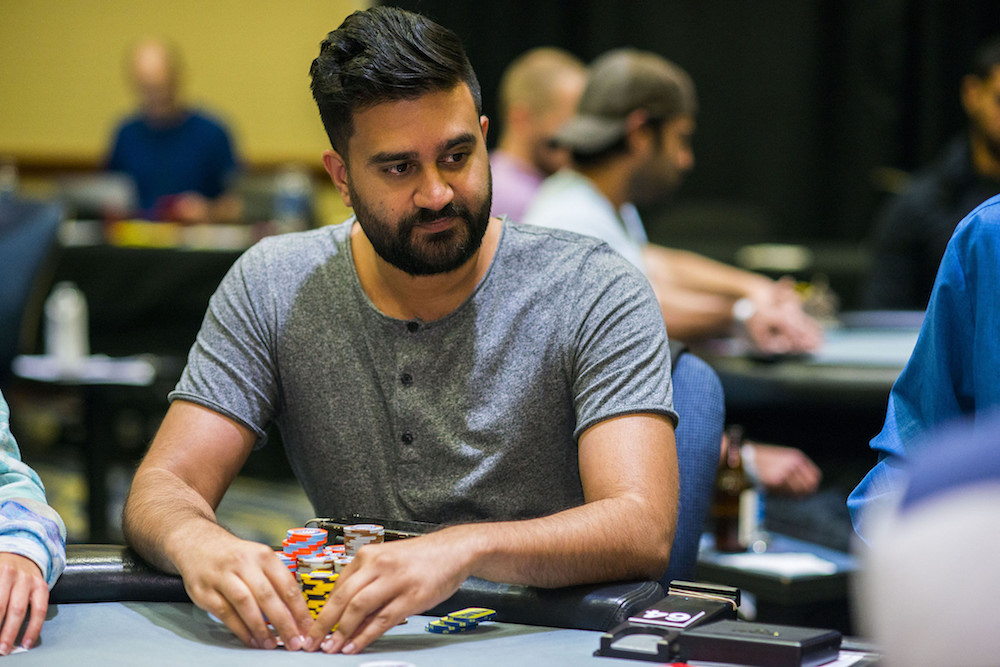 Just 23 players remain in contention for the Season XVI WPT bestbet Bounty Scramble Main Event title with Shankar Pillai (pictured) and his stack of 972,000 in chips leading the way.

Already with the chip lead in the tournament, Pillai raised from the cutoff seat. Zheng called from the small blind and Nguyen from the big blind, and the flop came down

came on the turn. Both players checked, and the river was the

that Pillai turned over and mucked his hand.

When action recommenced on Monday in Jacksonville, Florida, for the Season XVI WPT bestbet Bounty Scramble Main Event, 120 players remained in the field from the 323 entries that started. All were eyeing the $315,732 first-place prize, but first they had to battle to reach the money as only the top 41 spots would pay.

After the money bubble had burst, eliminated players began to line up at the payout desk. Among those to bust in the money were Ian O’Hara (35th), Dean Baranowski (33rd), and three-time WPT champion Anthony Zinno (31st).

Zinno was one of two three-time WPT champions to reach the money, with the other being Darren Elias. Where Zinno’s run to a fourth title ultimately fell short, Elias bagged the fifth-largest stack going into Day 3.

Other WPT Champions Club members still in the field and headed to Day 3 were Daniel Weinman, Sam Panzica, Tyler Patterson, and Zachary Smiley, and each has a interesting storyline.

Weinman was his World Poker Tour title in Season XV when he took down the WPT Borgata Winter Poker Open Championship for nearly $900,000. He then went on to win the Season XV WPT Tournament of Champions for $381,500. He’ll now bring 739,000 and the third-largest stack into Day 3 at bestbet Jacksonville.

Behind Weinman on the leaderboard to end Day 2 was Panzica, who is the defending champion of this event. In Season XV, Panzica won two WPT titles, with his first being right here in the WPT bestbet Bounty Scramble Main Event for $354,335. With only 23 players left and a stack of 721,000 in chips, Panzica’s hopes at going back-to-back are very much alive.

Last, but certainly not least, is Smiley. He also won his first WPT title in Season XV when he took down the WPT Maryland at Live! Casino Main Event. Smiley has one deep run under his belt this season – a seventh-place finish for $91,443 in the WPT Choctaw Main Event – and sits 31st in the Hublot WPT Player of the Year race.

Needless to say, all of the WPT Champions Club members remaining have very intriguing storylines worth following.

Day 3 of the Season XVI WPT bestbet Bounty Scramble Main Event will see the cards in the air on Tuesday, October 24, at 12 p.m. ET from bestbet Jacksonville. The field will play down to the official WPT final table of six, and you can catch all of the action right here on WPT.com.

In the meantime, enjoy this Heart of a WPT Champion video featuring Daniel Weinman.