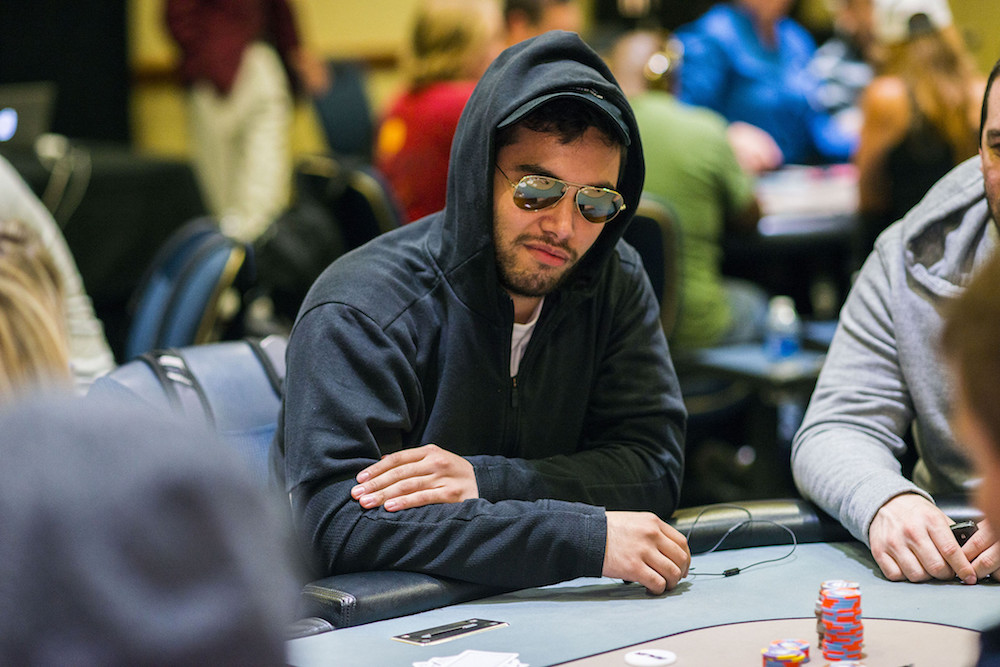 Day 1b of the Season XVI WPT bestbet Bounty Scramble Main Event was played on Sunday, with 174 entries added to the mix to bring the total field size up to 323 entries. Grabbing the Day 1b chip lead, and the overall chip lead for that matter, was WPT Champions Club member Zachary Smiley (pictured).

Smiley is no stranger to success on the World Poker Tour, and we could be witnessing the start of another run to a WPT title. Smiley tasted his first bit of World Poker Tour success when he captured the Season XV WPT Maryland title and $320,948 in prize money. Earlier this season, Smiley almost reached his second official WPT final table when he placed seventh at WPT Choctaw. Although he fell short, Smiley did earn $91,443.

At the end of Day 1b in Jacksonville, Florida, Smiley bagged up a stack of 341,700 in chips. Not only did that earn him the top spot heading into Monday’s Day 2, but Smiley picked up the $5,000 bonus prize for ending the day as chip leader.

Smiley’s big push to the top came right at the end of play, when he scored a huge pot worth 345,000 in a three-way clash with Joey Couden and Curt Kohlberg.

The three players got all in preflop, and it was Smiley in front with the

. Not only was he in front, but he had a dominating position in the hand over Couden’s

board kept Smiley’s aces in front to give him the huge pot. Kohlberg was eliminated on the hand.

“I had aces, so it played itself out,” Smiley said of the hand, modestly. “Basically, I couldn’t have played it wrong.”

Prior to that pot, Smiley was working with just under 150,000 in chips, so his day had been pretty successful up until that point.

“I was happy with where I was, because I had 100K yesterday, but I punted it,” Smiley said. “So I was happy to get back into six figures.”

Now, Smiley is more than 100,000 in chips ahead of anyone else in the field heading into Day 2.

Another WPT Champions Club member who had a bit of success on Day 1b was two-time winner Marvin Rettenmaier. Rettenmaier advanced to Day 2 with a stack of 245,200 and was actually the player everyone thought was going to be the chip leader, until Smiley snatched it all away. Nevertheless, Rettenmaier has put himself in a very good position to make another deep run in Season XVI of the World Poker Tour. It wasn’t too long ago that Rettenmaier maneuvered his way to the televised final table of the WPT Legends of Poker, where he took fifth place for $120,775.

As for the bestbet bounty players, the field had a total of 34 in competition, with 20 on Day 1a and 14 on Day 1b. Of those, 15 survived to Day 2 after six came from Day 1a and nine came from Day 1b. Those bounty players to advance to Day 2 were Matt Stout, Loni Harwood, Sean Winter, Jessica Dawley, Sam Soverel, Anthony Zinno, Esther Taylor, Tyler Patterson, Richard Seymour, Allison Hollander, Ebony Kenney, Shannon Shorr, Byron Kaverman, Marvin Rettenmaier, and Matt Affleck.

Day 2 will begin at 12 p.m. ET from bestbet Jackvonsille. With 323 entries in the field, the prize pool surpassed the $1 million guarantee. Final numbers are being double and triple checked, and the payouts are being generated to be announced on Monday. Be sure to stay tuned right here to WPT.com for continued coverage of the Season XVI WPT bestbet Bounty Scramble Main Event.

In the meantime, enjoy this Heart of a WPT Champion video featuring the event’s chip leader, Zachary Smiley.