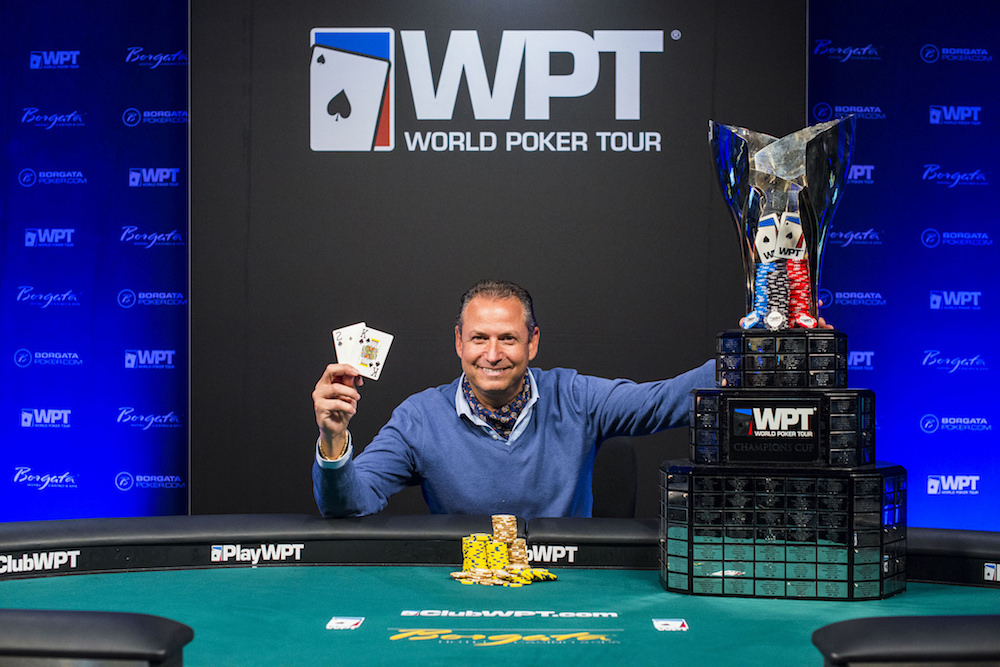 Eric Afriat entered an elite group of poker players on Friday night. Just before Groundhog Day came to an official close, Afriat took down the Season XVI WPT Borgata Winter Poker Open to earn his second World Poker Tour title. He bested a field of 1,244 entries and won $651,928, which includes a $15,000 seat into the season-ending WPT Tournament of Champions.

His first title came back in 2014 from the WPT Seminole Hard Rock Poker Showdown, winning $1.081 million in the largest WPT Main Tour event in history. With a second WPT title under his belt, Afriat puts to bed any thoughts that his first win was a fluke.

“The excitement of a second title, I think it brings me to another level,” said Afriat. “You win one WPT, but when you win the second WPT, I think you are considered a great poker player. I knew I was a good poker player and maybe even a great poker player, but to come in and have two of them, I think I put my stamp on what I do.”

Afriat defeated Justin Zaki heads-up play to deny Zaki his first WPT title. Zaki, along with the four other players standing in Afriat’s way, were all poker professionals. Afriat makes his money in the real estate industry and considers himself an amateur, regardless of his talent.

The Montreal native was amid some time off from tournament poker. He had very little desire to grind and was enjoying his life without poker. It was the support from two people very close in his life got him back on the road and out at Borgata.

“My wife pushes me a lot,” said Afriat. “She says ‘Go play. Go play.’ And I’m like “But I don’t want to play.’ She tells me she knows I’m one of the best and she keeps pushing me to go play. My wife, she’s like Adrian in Rocky. She tells me I’m the best and when I sit at the table, that’s the motto I take when I come in on the poker table. That’s the way I look at it. When I’m sitting down, I’m the best poker player at the table.”

Aside from his significant other, a little motivation from a friend helped reinvigorate his love of the game.

“I have a very good friend of mine that is a very rich fellow,” said Afriat. “He used to bring me to the hockey games in Montreal. He goes ‘Eric, do you need a partner?’ and I said, ‘I don’t need a partner, but you’re such a charming and lucky guy, come join me.’”

Afriat allowed his friend to buy a piece of the action and the shared gambling experience got him back on the road.

Confidence was never an issue for him. He never felt greatly outmatched, but this one didn’t come as easy to him as the first title did in Florida.

Afriat got all the attention at the end of the final table. At the beginning of it, however, everybody was focused on Zach Gruneberg, who came in with just shy of half of the chips in play and ended Day 4 on an absolute tear. The Pennsylvania poker pro never got any traction at the final table, however, and never extended his chip lead before ultimately falling in third place for $321,533.

Throughout the first half of the final table, Gruneberg’s stack stayed relatively flat while the first few players hit the rails.

It only took a few orbits before Stephen Song hit the rail. The youngest player at the table got all in on the flop against Afriat. Afriat flopped a full house and had Song drawing to running aces to stay alive. Song made his flush on the turn but was drawing dead to the river. He took home $138,254 for his sixth-place finish.

The chips didn’t really move until Michael Marder doubled through Joe McKeehen. It was a cooler with Marder and McKeehen getting all in on the flop with Marder’s middle set against McKeehen’s nut straight. The turn and river both brought queens and Marder filled up to double through McKeehen.

Marder’s run good didn’t last much longer as he was the next player to exit the final table. It was another cold deck, but this time, Marder was on the wrong end of it. Marder tangled with Gruneberg and got all in on the river with a completed board of

. Marder bet, Gruneberg shoved and Marder tanked for a bit before calling with

, giving him a 10-high straight flush to eliminate the hometown favorite in fifth place for $181,329.

McKeehen was the next to go. After losing a critical pot to Afriat where he called a four-bet with pocket nines and correctly check-folded on a queen-high flop when Afriat flopped top pair. Afriat, who four-bet with queen-ten suited, thought this was a spot where he picked up weakness on McKeehen.

“The queen-ten, he came in weak and I came over the top,” said Afriat about the hand. “But I min-raised him, it wasn’t like a hand where he needed to shove or anything. He could just call and see the flop. I hit a beautiful queen on the flop. But queen or no queen, I was doing the same thing.”

Aggression was the central focus of Afriat’s game plan coming into the final table. He didn’t want to play fearful against five professionals. He was going to try and take any edge he saw.

“When I sat down, I told myself that I’m not being passive,” said Afriat. “I came in with a crazy attitude. I came in fearless. I think when I play poker, I have this feeling. I just have this vision. I know what to do with my cards. I have a feeling. I know what the other player has. I feel weakness and I attack the weakness.”

McKeehen was left with just over 20 big blinds and got all in the very next hand with ace-jack against Gruneberg’s ace-king.

Gruneberg began three-handed play with over half of the chips in play, but nothing went right for him after that. He still held about half of the chips in play at the start of three-handed, but over the course of about 50 hands, he became the short stack. His downtrend in chips was mostly thanks to a failed three-barrel bluff against Zaki and calling three streets against Afriat on a

board and mucking to Afriat’s pocket sixes.

He finally got it all in with ace-nine against Zaki’s pocket tens. Zaki won the pot to eliminate Gruneberg in third and start heads-up play with a 2-to-1 chip lead against Afriat.

The heads-up match between the two was a battle that lasted for several levels, hours, and more than 100 hands. Afriat started out with a chip deficit but quickly took back the chip lead without many showdowns.

As the blinds got bigger, however, the stacks got shallower and the chips were getting into the middle more often. There were several preflop all in confrontations that prompted several lead changes. Eventually, when they were about even in chips, all the chips got in the middle with Afriat’s ace-king against Zaki’s king-eight.

Afriat’s hand held up and left Zaki with just a couple big blinds. He won the tournament on the next hand when.

Despite performing at such an elite level, Afriat doesn’t want to be put in the public eye. He enjoys the anonymity.

“I hide everything I do in poker,” he said. “You go to my Facebook page and you’ll never see anything about poker. I keep my poker confidential. I always did. But today it goes viral and there’s nothing I can do. I don’t want to be famous. It’s not my style.”