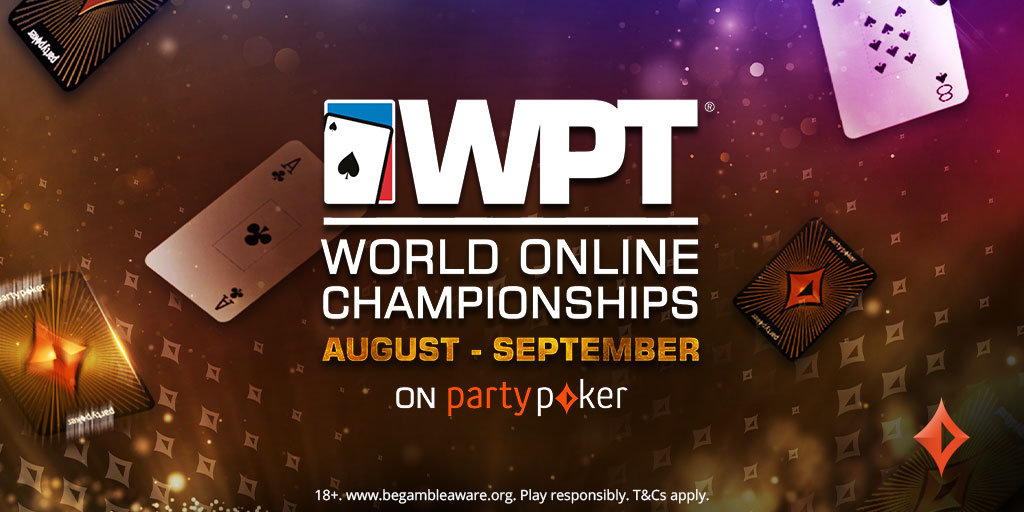 Only two weeks remain in the second-ever World Poker Tour World Online Championships (WOC) on the partypoker platform. The festival is gearing up for the business end with the second starting day of the $5,300 Main Event and offers plenty of other highlights in the days to come. Among them are the $25,500 Super High Roller Championship, the 6-Max Championship and the three editions of the WPT500 Knockout.

The WPT500 determined a winner this week as the powerhouse of Brazil saw one of their talents come out on top in Pedro Cavalieri. Find out more about the final table action below, which was also live-streamed on the partypoker Twitch and YouTube channels.

Out of a field of 2,295 entries, only nine players remained in contention to battle for the biggest slice of the $1,147,500 prize pool in one of the most popular events on the schedule. Two players each from Brazil and Bulgaria were in the mix and the conclusion of the nine-handed final table took fewer than four hours. Once the final river card was dealt, Pedro Cavalieri defeated Thomas Hueber in heads-up.

Prior to the short-lived duel, they had cut a deal and left $10,000 to play for. Cavalieri had the best of it when his overpair counterfeit the flopped two pair of Hueber and that gave the Brazilian a top of $153,504 while Hueber had to settle for $137,624. The third spot on the podium was occupied by Bernardo Soares while the three arguably most well-known finalists Stoyan Obreshkov (5th place), Ognyan Dimov (7th place) and Maxi Lehmanski (8th place) were among the early casualties.

In a defining moment of the final table, Cavalieri doubled through Dimov with kings versus jacks when the two biggest stacks got it in preflop. From there on, the Brazilian never surrendered the top spot anymore and rode to victory with sheer aggression to become the latest WPT500 champion.

*includes heads-up deal of the final two players, who played for $10,000 to the winner

While the final table of the WPT500 played out, the first starting days for the Knockout edition were already completed. Across all flights so far, a field of 800 entries emerged to put the event up to 40% for meeting the $1 million guarantee. Each starting day played down to the top 15% and that has left over 120 survivors so far. Players can buy in directly for $530 or qualify through the satellites for their shot at the seven-figure prize pool.

Brazil once again dominates with four of the current top five all flying their flag. Only Claas Segebrecht was able to sneak in there with a stack of more than 9.6 million, which only trails Rodrigo Selouan. The newest partypoker ambassador Yuri Dzivielevski has also secured a big stack and sits in ninth place thus far with just shy of 7.5 million in chips and $312.50 in bounties.

Other notables with stacks well above the average include Pedro Marques, Jean-Pascal Savard, Alexandru Baron, Christian Nolte, Lars Kamphues and Niklas Astedt to name all but a few.

Alongside the big $530 buy-in are also the Super50 and Super5 editions, which have become tremendously popular in recent festivals on the partypoker festival. The Super50 is already close to covering the $250,000 guarantee thanks to 4,063 total entries. Of these, 600 have punched their seat for Day 2 and locked up a portion of the cash pool.

Dutchman Bram Berkvens leads the pack with a stack of more than 14.9 million and Julien Seidler follows in second with more than 12.5 million. The biggest bounty prize collected so far belongs to Pavel Taktaev, who has already earned $239.06 in knockouts.

___
In the meanwhile, the Super5 Knockout has collected $28,615 so far and will pay out at least $50,000 in cash and bounty prizes. There have been 5,723 entries ahead of the weekend flights and 825 players made the cut. Similar to the WPT500 Knockout and the Super50 Knockout, starting days will be available until Monday, September 6.

Twelve players turned their starting stack of 500,000 chips into more than 20 times of that and seven of the top 20 stack sizes belong to players from Brazil. However, Bruno Rabelo is the best of them so far with just over 11 million in chips. Ciprian Zainescu and Alexander Antezana Landeo are separated by just a few big blinds at the top of the leaderboard.

This past Sunday, a field of 390 entries emerged in the flagship $5,300 Main Event, which comes with a guarantee of $5 million. Only the top 59 players made the cut and Jorma Nuutinen from Finland was the last player to bust. Nuutinen can however take another shot during the remaining three starting days, which are scheduled for the next two Sundays and Monday, September 13.

One of the biggest names in the world of online poker amassed the most chips on Day 1a as Andras Nemeth was the only player to turn his 200,000 stack into more than 4 million. Steven van Zadelhoff follows in second place and Luka Plenkovic rounds up the top three. Notables in the top 20 also include the likes of Jakob Miegel, Pedro Garagnani, Daniel Mcaulay, Arseniy Malinov and Christopher Frank. The only partypoker ambassador through to Day 2 so far is Jeff Gross with a stack of around 1.3 million.

Just prior to Day 1b at 7.05 pm BST, a $530 Mega Sat awaits with 50 seats guaranteed and there are more than 180 players registered so far. Mega Phase satellites give partypoker players the chance to take a shot for as little as $4.40 to earn their seat for one of the pinnacle online poker events of the year.

Upcoming Festival Highlights on the Weekend

The two editions of the Weekender return for yet another exciting showdown on the global online poker platform during the ongoing festival. Once more both tournaments feature four starting days in total. The Weekender comes with a $109 buy.in and $150k guarantee while the Mini Weekender costs $11 to enter and has a guarantee worth $30,000.

Players also have the chance to win their entry to the $1,050 WPT Grand through the step tiers, which start for as little as $2.20. The Phase Final is slated to take place on Sunday, September 5 and will offer a guaranteed prize pool of $300,000. Stakes are rising even further in the most expensive tournament of the entire series. On Sunday, September 5, the one-day Event #12: Super High Roller will attract some of the biggest names in poker. The high stakes contest features a buy-in of $25,500 and guarantee of $1 million. Players can live the dream and enter satellites for as little as one cent all the way up to the $2,600 buy-in tier.

The WPT.com team will be back early next week for wrap-up of the most exciting tournaments during the S19 World Poker Tour World Online Championships (WOC), so tune in back then to find out who etches their name into the history books.