Sofia Lovgren, Dominik Nitsche and Vivian Saliba Among 888 Ambassadors who Displayed their Prowess in WPTDeepStacks London

The last three days have seen a ton of fantastic tournaments take place across 888poker’s three networks. There was the High Roller, the Marathon and Crazy 8 comps to name a few. Plus, of course, there were their more affordable ‘Mini’ counterparts taking place at the same time, ensuring a wealth of choice for players logging in to try to win a WPTDeepStacks title.

A total of 18 title winners emerged in the last three days, and you can find details on all of them here, as well as details of who is currently chipped up in the $1,000,000 guaranteed WPTDS London Main Event.

The largest buy-in event of the series was the one-day High Roller. With a $2,100 price tag, and 50 entries (including re-entries), the guarantee was hit on the nose. PerfectShade ($32,000) went the distance, and the deciding hand of the event required some help for them to get there against casual_win ($22,500), who would ultimately finish up in second place. 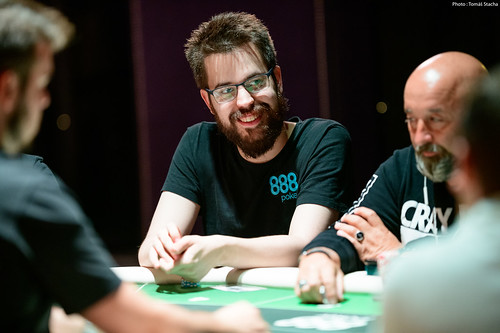 There were some familiar faces among the final tablists, with three 888 Ambassadors making the cut. Sweden’s Sofia “sofialovgren” Lovgren ($15,500) did the best of them, advancing all the way to third place. German superstar Dominik “888Dominik” Nitsche ($8,000) reached as far as 5th place, while teammate Vivi “Vivi.888” Saliba picked up 7th place, securing a min-cash of $5,000 in the process.

Saliba’s result meant that Peter_Martin was left out in the cold, bubbling in 8th place.

Once again, 888 flexed their muscles, with two reaching the final table yet again. This time though, they were both eliminated early, with Sofia Lovgren ($2,250) busting first in 9th place. She was followed out the door by Canada’s Alexandru “alexos888” Baron ($2,750) in 7th place – not an 888 Ambassador despite the name suggesting so – and Martin “MJacobson888” Jacobson hot on Baron’s heels, collecting $3,500 for reaching 7th place.

The $440 event saw 219 entries log in to take place, and after seven hours and seven minutes of play, it came down to kiskutya23 and crimson92 to fight it out for the title. The duo opted to do a deal, which left crimson92 of Canada to pick up the trophy, title and $19,811 in prize money, while kiskutya23 collected $17,438 for finishing runner up.

The Marathon kicked off last night and the one-day event featured 180 total entries by the time late registration had ended. Main Event Day 2 chip leader (for now at least) DeuceofDuc0 collected $23,250 in prizepool winnings for the result, after besting runner up JPiernik ($16,650) to take the title and trophy.

Britain’s RuskiBotski ($12,000) finished in third place, and another notable final table appearance was by High Roller runner up casual_win, who added a further $3,160 to their bankroll for reaching 7th place.

Three more starting flights are in the books, and a total of 628 entries have taken part so far, with over 100 progressing to the second stage. Day 2 commences at 19:00 BST on Monday 26 April, and there are a few new names in the top 10 stacks following the most recent Day 1s to take place.

There are still three more Day 1 opportunities (one each day between 23-25 April), so if you would like to get involved in the action, it really couldn’t be easier. There are also a ton of satellites running each day, with the possibility of spinning a Main Event ticket up from a freeroll! Head to 888poker.com for more details.

The Iberian festival continued with its own High Roller event on Tuesday. The event easily beat its guarantee with €22,560 in the pot after 96 players (including re-entries) each invested the €250 buy-in.

It was Spain’s turn to take a victory after tatillo14 eliminated the last of the opposition. The Spaniard won €5,558 in doing so, and Portuguese 3bet2call took the second biggest prize available, adding €3,968 to their wallet for coming runner up. Spain took the third podium spot when AUDIRS3 (€2,833) managed to advance to third.

Once again, the guarantee was easily surpassed with €17,400 up for the taking for the 174 entries, and once again it came down to a Spain/Portugal finale. costra_palac flew the flag for Spain and went the distance after pipping Portugal’s laMOUILLETTE to the post.

The huge difference bounties can make to the value of the total prize was apparent here, with costra_palac banking a total of €4,155 including a huge €2,420 in bounties. costra_palac’s bounty winnings were worth more than laMOUILLETTE’s total cashes of €2,199.

Another Portuguese player, oedipa, took third place and won €1,390 for doing so.

The information for this event is currently unavailable but if you are keen to find out who were the biggest winners in this and the Mini 8-Max event, please check back later as we will update the information as soon as it is available.

The High Roller event proved very popular among players on Tuesday, smashing its guarantee by around a third! The €250 buy-in event had 115 entries all in all, which meant €27,025 in the pot when late registration closed.

It took just over six and a half hours for the game to play out, with Fantastik55 and MasterT1LT settling in for a heads-up match at the end. Fantastik55 managed to go one better than MasterT1LT but both players saw fantastic ROI for their investments, collecting €6,659 and €4,753 respectively.

The €109 tournament saw 133 entries all in all, which meant some added value for those in the running.

It took seven hours and 22 minutes for the field to be reduced to two, and moretta16 and Sincero4L were the ones who made it to the heads-up portion of the tournament. The former defeated the latter and the €1,658 bounty winnings meant a total haul of €4,221.

Third-place finisher umbertofet96 (€2,284) took almost as big a slice of the prize pool as runner-up Sincero4L (€2,829) did, further cementing just how important bounty winnings are in these popular events.

This €109 event was just six runners short of hitting its guarantee. It may have been Marathon in name, but seven hours and seven minutes was all it took for LupoLucio18 to cross the finish line, and lay claim to the €4,650 top prize.

Second and third places were taken by trilogy (€3,330) and perri71 (€2,400) who each made very respectable returns for their efforts.

The next two days will have some great tournaments on offer, as the final weekend of the three festivals guarantees to turn up the tension and excitement.

And don’t forget that the €125 Evento Principal and €22 Mini events take place on Sunday. These one-day events have guarantees of €150,0000 and €20,000 and there are satellites running right now!