The Big Stage: Actress Arden Cho Moonlights as a Poker Player at LAPC 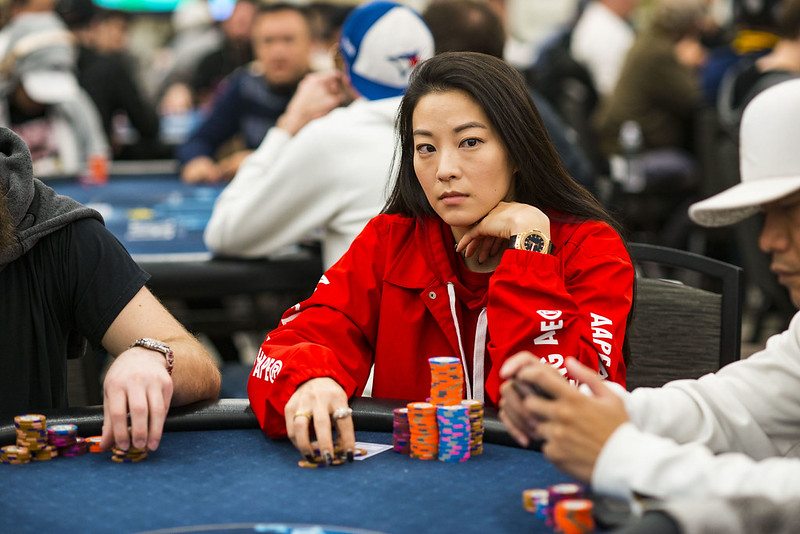 When most people think of life as an actor in Hollywood, names like Tom Cruise, Brad Pitt, Angelina Jolie, and Jennifer Aniston come to mind. It’s a world of celebrity parties, premiers, paparazzi, cocktails, and cameras flashing. Most moviegoers think of big names, big films, and big paychecks. But for much of Hollywood, acting is a regular day-to-day job – hustling to find that next TV show or film project.

Arden Cho (pictured) has known that life first hand as a working actress with shows like Teen Wolf, Pretty Little Liars, CSI: NY, and Hawaii Five-0 to her credit. She recently appeared in 17 episodes of the NBC show Chicago Med and even had a role in a 2013 Tomb Raider video game. Cho is between roles right now and is pleased with where her career has taken her.

“I love it,” she says. “I feel like I have friends who are sort of in that mega-famous side and they can’t go anywhere, it’s really tough. I like that I can work, get to do what I love, and there’s time to do other stuff too.”

That other stuff includes some time playing cards. To fill some time between acting gigs, the 34-year-old spent several years playing poker regularly to supplement her income. Cho began playing online in 2002 and also played some in college. Now among those playing on Day 2 at the WPT L.A. Poker Classic, Cho hopes her first time in the event comes with a deep run. She won her entry after firing three $1,100 bullets into satellites.

“I mainly play cash games,” she says. “I don’t really play tournaments because I don’t really have time. But I had the week off so I was like, ‘Why not?’ I had a lot of friends playing and I thought maybe I’d give it a shot.”

In 2018, Cho played for her first and only time in the World Series of Poker Main Event and cashed in 662nd for $21,750. She said things were going well on Day 2 at Commerce including a nice pot early with pocket Aces.

Born in Amarillo, Texas, Cho spent much of her childhood in the Dallas area before her family moved to Minnesota. She spent much of her younger years in dance and theater before attending the University of Illinois at Urbana-Champaign. Cho majored in psychology but also began getting more involved in theater. After graduation, it was off to L.A. to pursue a career in acting in modeling.

“I really like music and performing,” she says. “I like telling stories. I’m working so I can’t complain.”

Much of her time is spent going on auditions – grinding it out and hoping to land a new part. Nothing is in the works right now, but she’s hoping a nice role comes her way soon.

“It’s non-stop, you’re always looking for the next job because your job could end any time,” she says.

As a musician, Cho has a pop/acoustic sound and regularly releases songs on YouTube, Instagram, and Spotify. She says knowing others are watching or listening to any of her works always gives her a nice feeling.

“It’s just nice when people care,” Cho says. “Just one, two, or three viewers make a big difference. As an independent artist, we’re always on the grind. That’s very similar to poker, which is why I think I like it. You’re sort of your own boss, make your own schedule, and get to choose when you want to work. And then when you do, it’s nice to have support.”