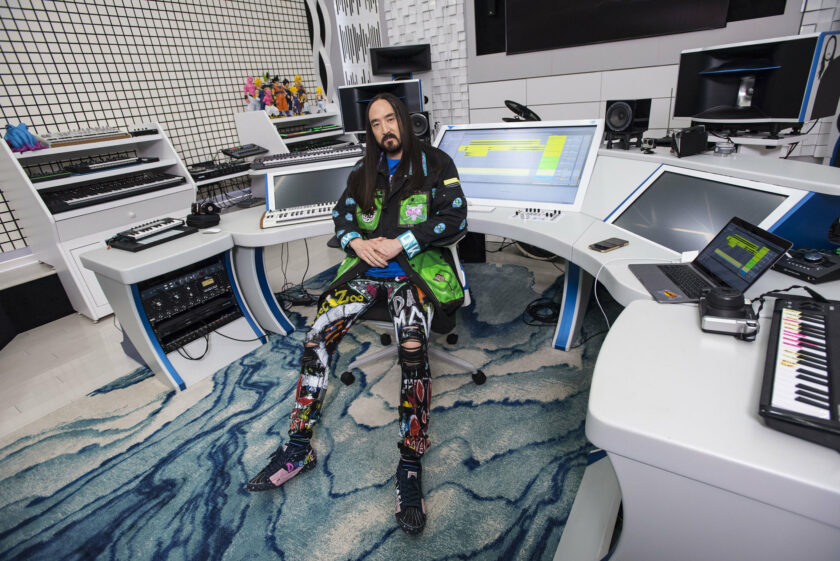 “I am super excited to get back to playing some cards with the World Poker Tour. Seminole Hard Rock Poker Showdown here I come!” Aoki said.

Players and fans are welcome to attend Aoki’s Meet & Greet and autograph session at 3 pm on Sunday, April 10. Aoki will then handle “Shuffle Up and Deal” duties for the $1,700 Deep Stack Purple Chip Bounty event, in addition to hosting a VIP gathering on property later that evening.

“Steve Aoki brings an unmatched passion and energy to any venue,” said Adam Pliska, World Poker Tour CEO. “As we continue to celebrate the 20th anniversary of the World Poker Tour, having Steve augment the Seminole Hard Rock Poker Showdown is all we could ask for.”

This will be the second opportunity in as many months for fans to meet Aoki through WPT. In February, Aoki held a special event for lucky fans at his Las Vegas-based Aoki Playhouse where a handful of selected winners played a Sit and Go poker tournament with Aoki, Phil Ivey, Maria Ho, and Vince Van Patten. Aoki superfan Chris Osse took down the top prize of a signed custom WPT and Steve Aoki collaborative poker chip set.

For more information about the World Poker Tour visit WPT.com.

About the World Poker Tour®
World Poker Tour® (WPT®) is the premier name in internationally televised gaming and entertainment with brand presence in land-based tournaments, television, online, and mobile. Leading innovation in the sport of poker since 2002, WPT ignited the global poker boom with the creation of a unique television show based on a series of high-stakes poker tournaments. WPT has broadcast globally in more than 150 countries and territories, and is currently producing its 19th season, which airs on Bally Sports in the United States. Season XIX of WPT is sponsored by ClubWPT.com. ClubWPT.com is a unique online membership site that offers inside access to the WPT, as well as a sweepstakes-based poker club available in 43 states and territories across the United States, Australia, Canada, France and the United Kingdom. WPT also participates in strategic brand license, partnership, and sponsorship opportunities. For more information, go to WPT.com.

About Steve Aoki
Boasting a 77 million average monthly reach across all his platforms, 2x-Grammy-nominated music producer, artist, fashion designer, entrepreneur and NFT visionary Steve Aoki is one of the most successful cross-genre artists in the world. A Guinness World Record holder for the “Most Traveled Musician in a Single Calendar Year,” Aoki has performed at nearly every top festival around the world, including Coachella, Ultra Music Festival, Lollapalooza, Fuji Rock Festival, Tomorrowland and Electric Daisy Carnival.

Since the release of his 2012 debut solo album, Wonderland, which earned him his first Grammy nomination for Best Dance/Electronica Album, Aoki has collaborated with an impressive list of varied artists, including BTS, Maluma, Snoop Dogg, Linkin Park, blink-182, One Direction’s Louis Tomlinson, Machine Gun Kelly, Lil Uzi Vert, 2 Chainz and Daddy Yankee, on top of having released three Platinum singles, six Gold singles, and over ten Top 10 self-produced radio records. After unveiling four Neon Future albums, the most recent being Neon Future IV in 2020, Aoki’s next album is due later this year featuring the dynamic alt-rock single, “KULT,” alongside grandson and Jasiah.

Aoki approaches each new endeavor with the same sense of dedication he’s put into his past achievements, including his critically-acclaimed 2019 memoir BLUE: The Color of Noise and THE AOKI FOUNDATION, which he founded in 2012 to support organizations in brain science and its research. His influential record label Dim Mak celebrated its 25th anniversary in 2021, which is known for being a launching pad to the careers of prominent acts like Bloc Party, The Chainsmokers, Bloody Beetroots and The Kills. Most recently, Aoki created the A0K1VERSE, an NFT membership community, powered by the Passport, which welcomes his fans to both virtual and real-world experiences. In whatever space he enters, the multi-hyphenate entrepreneur continues to set trends and inspire creativity on a global level.