It was the last day of the last weekend of the World Poker Tour Online Championships yesterday, and the tournaments reflected that. The biggest names in poker all logged on to partypoker and competed in tournaments big and small.

From the $11 Micro Weekender to the $25,500 High Roller Championship, it was a sight to behold as you saw all the events in action. Take a look at recaps from the Superstack, Weekender, Big Game, the High Rollers, and the Turbo Championship.

A field of 433 entries gathered for the Turbo Championship, no small feat for a $3,200 buy-in event.

Francesco Romanello was the first to bust the event. Daniel Reijmer, playing from Mexico, followed not much later, bought back in, and busted again shortly after. Gustavo Mastelotto from Brazil bubbled the event in sixty-fourth place, paving the way for the remaining sixty-three players to be guaranteed a min-cash of $6,560.

Richard Dubini (49th) and Jeff Gross (43rd) were the sole two partypoker pros to finish in the money, both receiving $7,209.

With 12-minute levels and just a single reentry allowed, things went rather quickly. After a little under eight and a half hours of play, only one man was left standing, and he walked away with $188,316. Bulgarian high roller Dimitar Danchev was declared the champion, having forged a deal with Belarussian poker player Aliaksei Boika (2nd, $156,843) and Alfred Karlsson (3rd, $184,832) from Sweden. 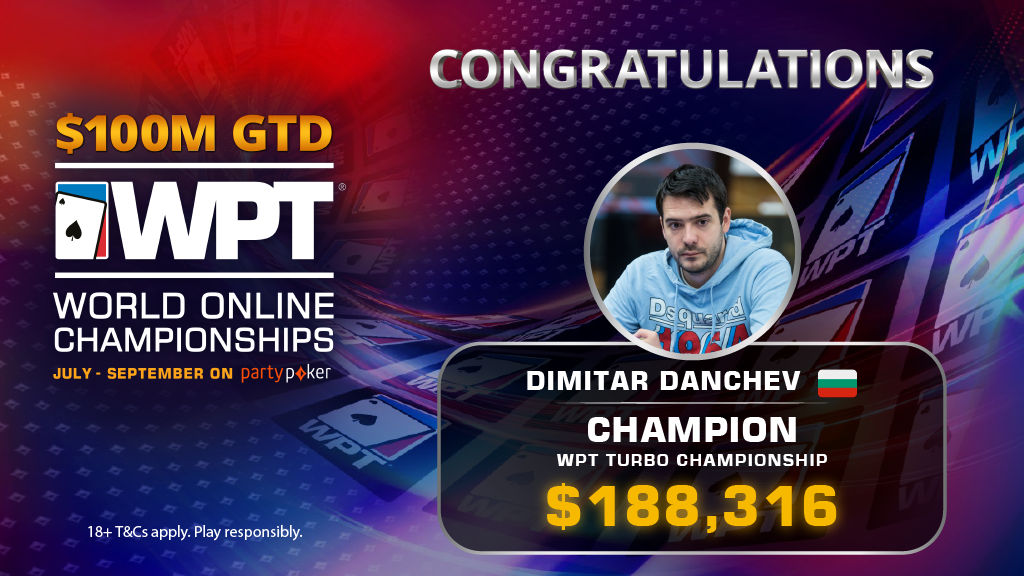 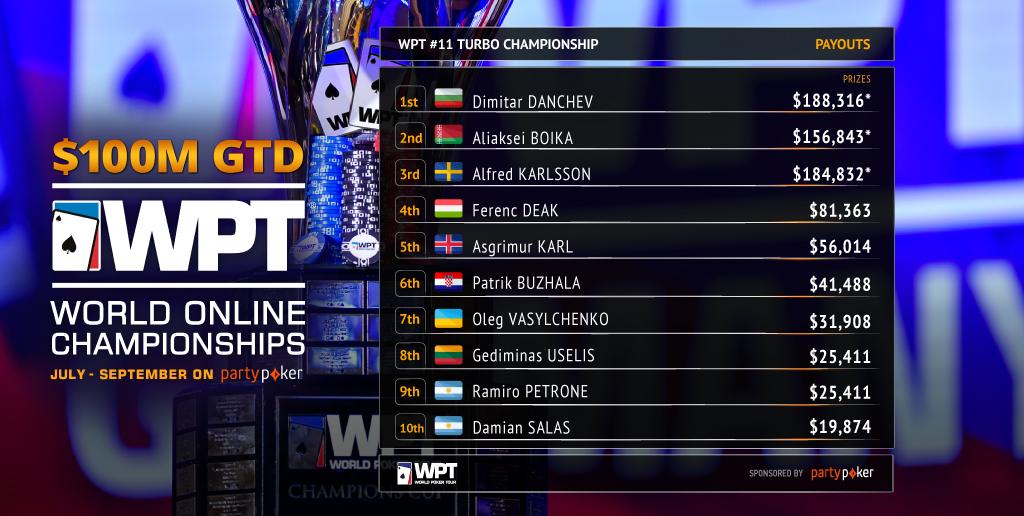 Dutchman Floyd Rosner beat a field of 1,353 entries in the mini edition of the Turbo Championship, walking away with $66,041. With many more players but 10-minute levels instead of 12, this event took around eight and a half hours to complete.

There was no deal in this event, so Rosner took the full first-place prize home without making any concessions. Alexandre Espirito Santo Mantovani from Brazil finished second for $44,726, Patrick Hyllegaard Pedersen from Denmark finished third for $30,103.

Rosner’s countryman Lars Vlieg was the first to bust. Remarkably, Anton Suarez from Sweden busted in 1,345th and 1,344th place. Vitor Abreu from Portugal, playing from Malta, bubbled in 204th place, with Daniel Wilson being the first to go out in the money (203rd, $629).

The $33 buy-in Micro edition went to a Dutchman as well; Ronald Fokker bested a field of 3,890 entries. Fokker walked away with $17,537, 531 times the buy-in of the event. Despite playing for huge stakes – especially compared to the buy-in – there was no deal in this event as Fabio Maritan Pereira’s second place was worth $11,810. Marcus Christer Ekman finished third for $7,895.

Andrew Sullivan was the first to bust with Andrew Wayman bubbling.

Patrick Leonard, undoubtedly looking for points for the Rising Star Leaderboard, finished in 306th place for $74 and was the only partypoker-sponsored player to cash. Well-known German player Fabio Sperling made a deep run but fell in 14th place for $799.

Daniel Dvoress was the first to go out, followed by Bert Stevens and Kahle Burns both busting twice in quick succession. Poker retiree Fedor Holz bubbled when he exited in tenth place, setting up the remaining nine with $20,500 at the minimum. 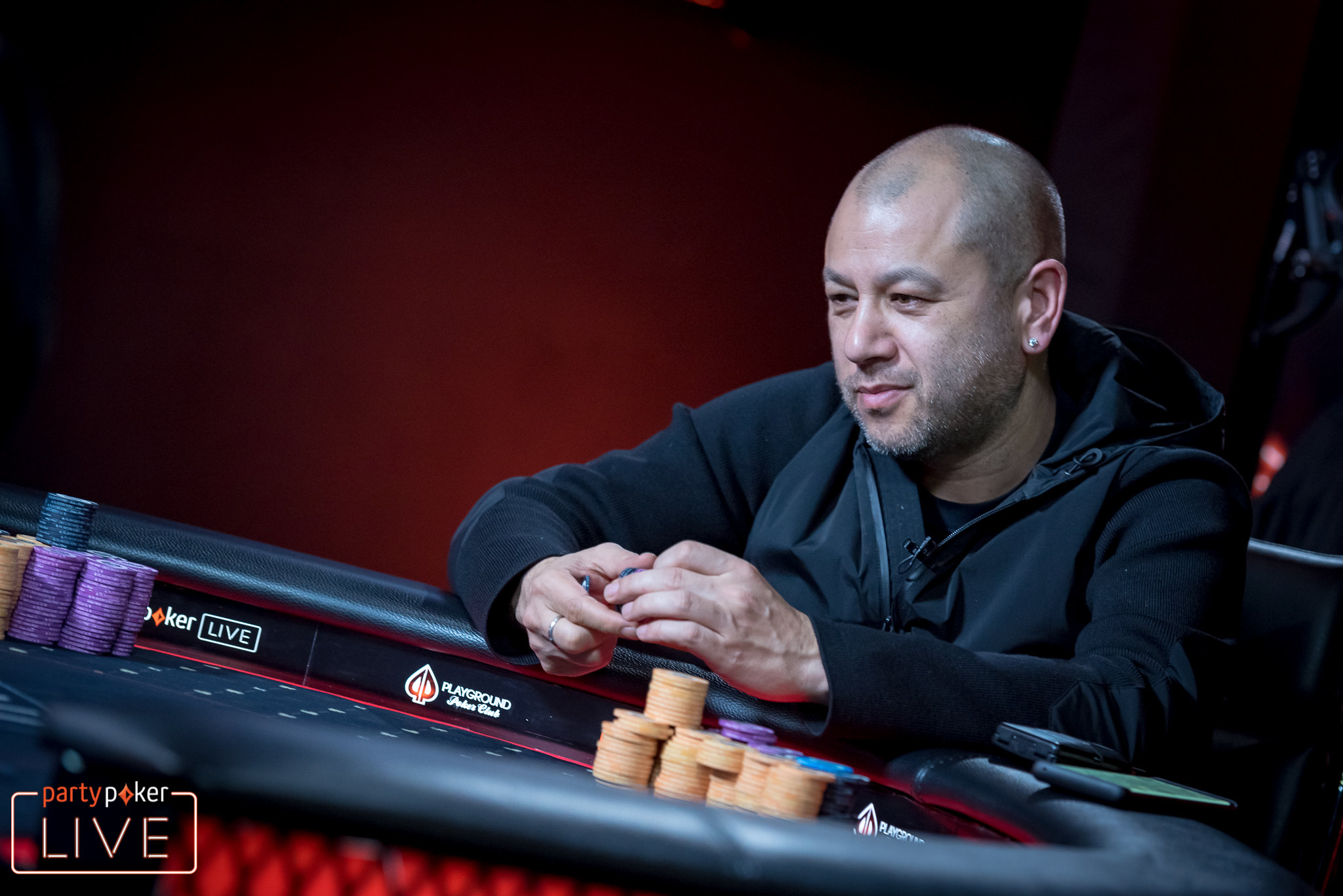 partypoker partner Rob Yong gave it his all but ultimately couldn’t grab the title. He finished runner-up for $107,500, with only online beast Benjamin Rolle to do one better. The German superstar of (online) poker triumphed for $155,000.

The $25,500 High Roller Championship had its Day 1b on the docket last night, another chance for players to try and get through to Day 2.

Ultimately, the event collected 111 entries, of which seventeen progressed to Day 2. Together with the 88 that signed up for Day 1, that brings the total to 199 entries. With eleven making it through to Day 2 on Day 1a, that means twenty-eight players are still in contention for a piece of the $5,000,000-pie.

Besides Jason Koon, Ludovic Geilich (797,634) is the only other partypoker-sponsored player to make it through. Their colleagues, Patrick Leonard, Joni Jouhkimainen, Dzmitry Urbanovich, Renato Nomura, and Isaac Haxton all tried but busted before the day’s end. The latter attempted twice but split before the bell rang both times. 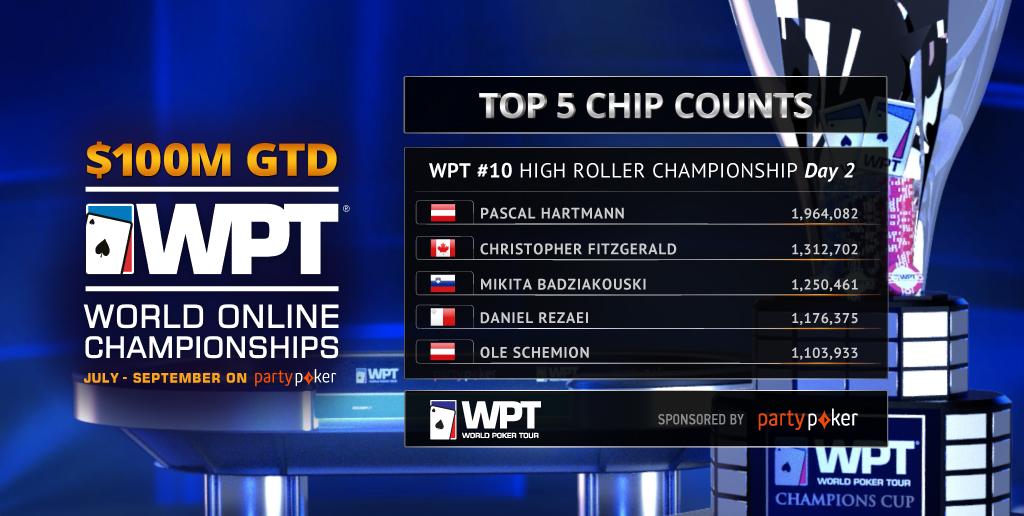 A small battalion of partypoker-sponsored pros gave it a shot. Still, Ludovic Geilich and Isaac Haxton were the only ones to reach the money after Belgian high roller Bert Stevens bubbled in thirty-third place. Geilich finished in twenty-first place for $12,548, a bit more than the $10,440 min-cash.

Isaac Haxton will return to the virtual felt tonight as he sits in sixth position with nine players remaining. The final nine return to action tonight at 7:05 pm (BST) with blinds of 250,000 and 500,000 (62,500 ante). Shane Okeeffe was the last player to bust before play was halted, his tenth position was worth $17,868. 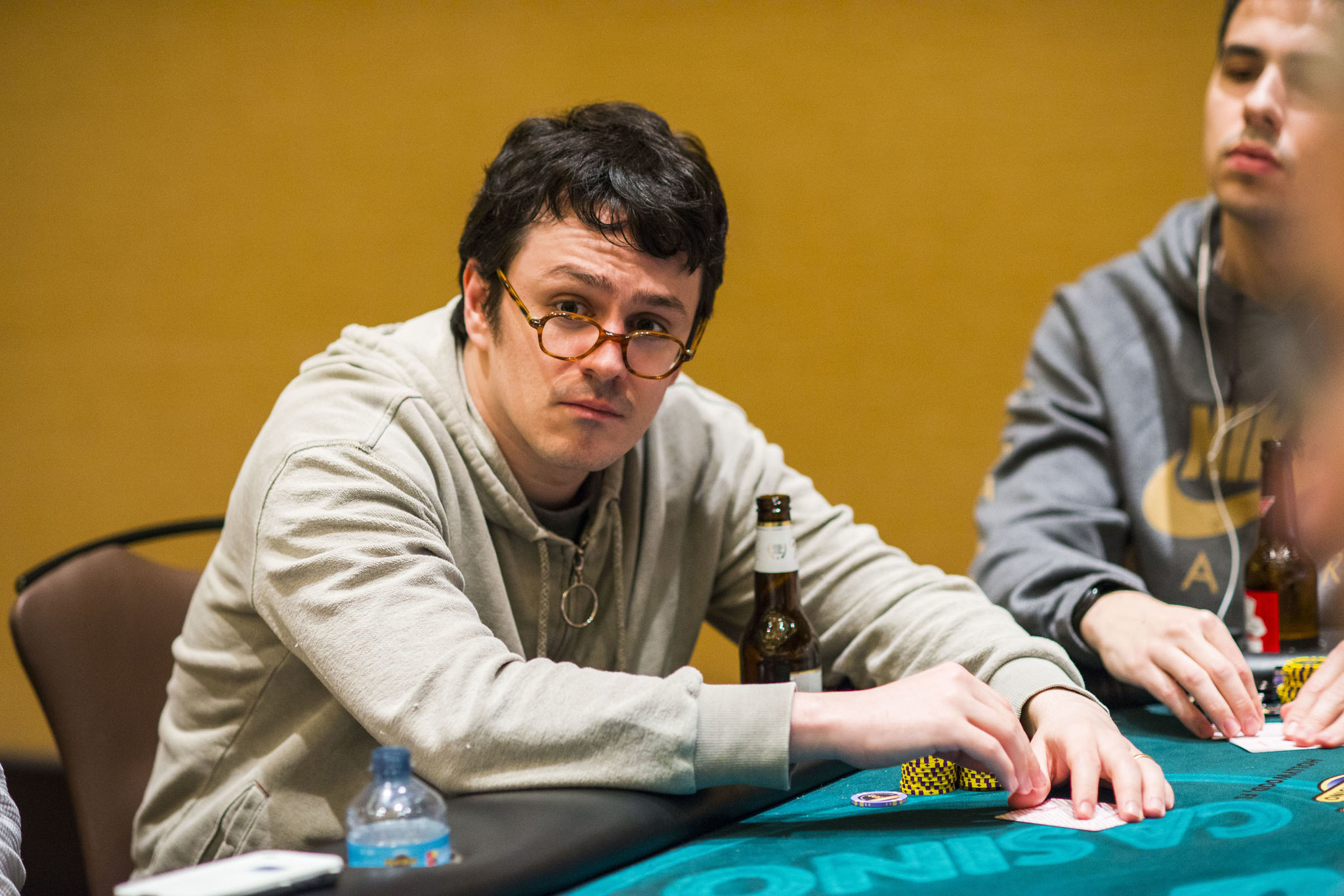 Well-known Swedish pro Simon Mattsson bubbled the event in seventy-third, guaranteeing the remaining seventy-two players a cash of at least $1,350. Rainer Kempe and Simon Deadman missed out on money as well, going out in seventy-fourth and seventy-fifth respectively.

Kleber Gregolon from Brazil turned his one million starting stack into 102,170,772, the chip equivalent of over a hundred players! Tomáš Hasil from the Czech Republic sits in second with 86,662,378. Dutchman Remco Lieftink takes third with 81,464,244.

Krzysztof Górecki bubbled in 217th place; the remaining 216 players were guaranteed $130 from that moment on. Jeff Gross was the last player to bust on Day 1 of this 2-day event, his fortieth place finish netted him $330.

The thirty-nine players coming back tonight have that same $330 locked up. The first-place prize is set at $16,640, with the only other five-figure score assigned for the runner-up, who is to collect $11,832. Alexey Ivanov is the shortest returning; his 8,317,983 is worth almost six big blinds when play resumes. 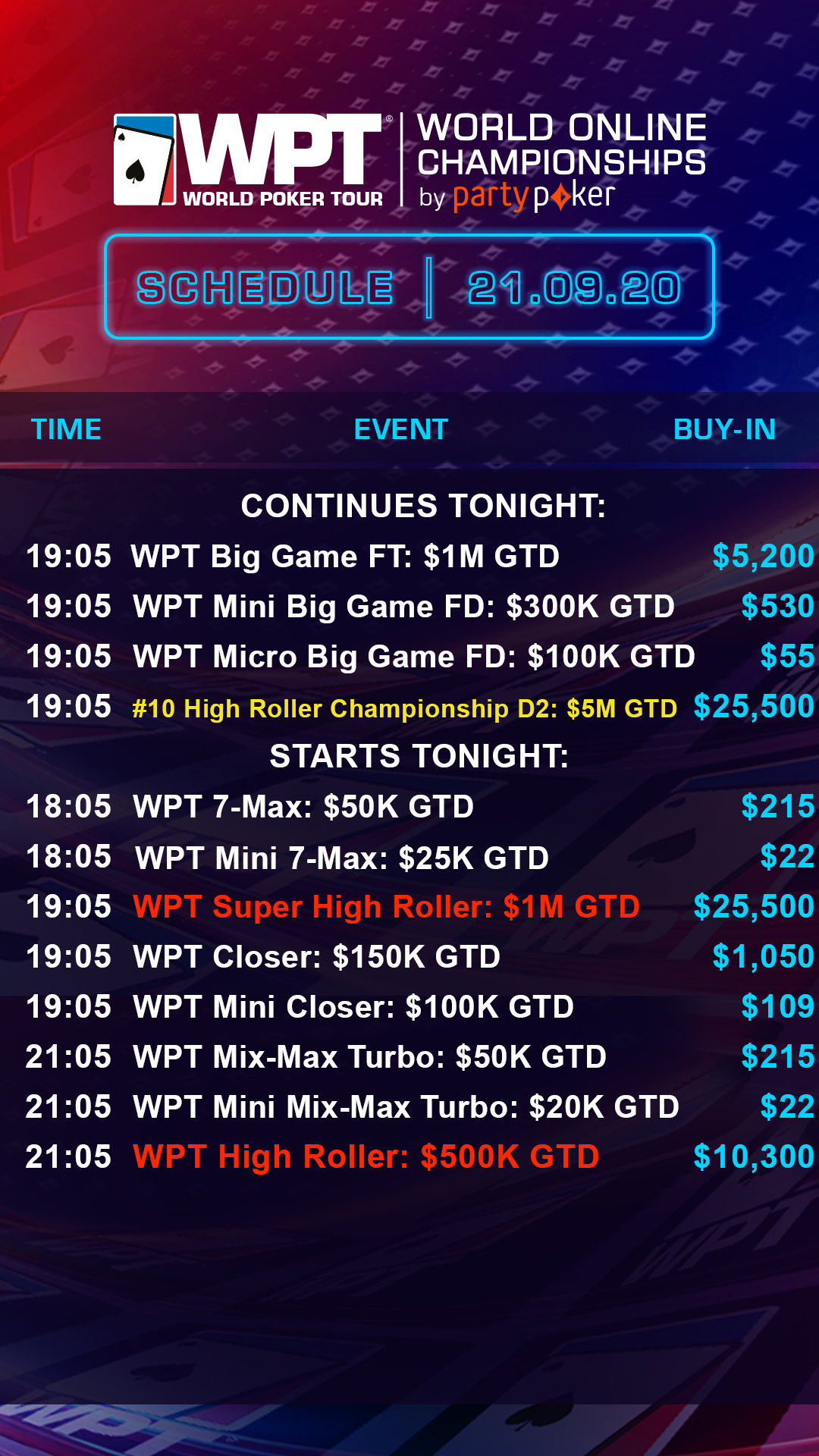