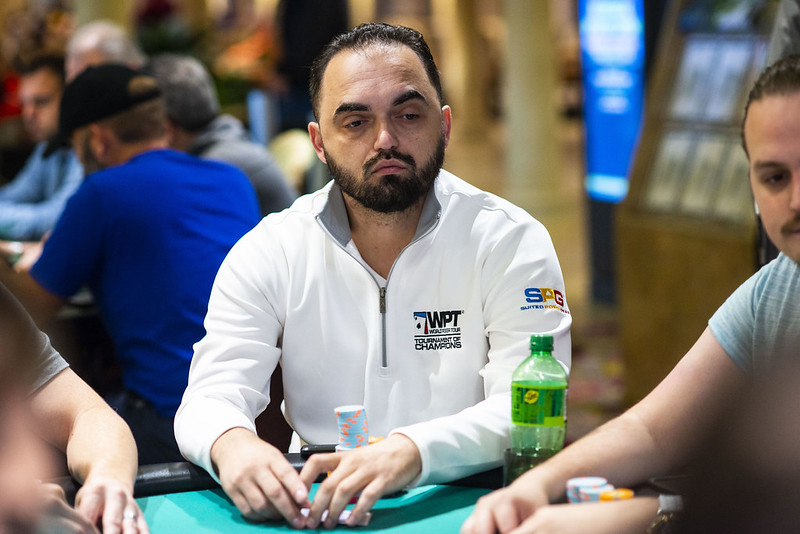 Maybe it was déjà vu, but mom just had a feeling. Tony Sinishtaj’s mother Lena recently relayed a dream to her poker-playing son. Her dreamland vision involved his father, who passed away in 2016, telling her that Sinishtaj (pictured) was going to win $100,000. The longtime poker pro shrugged the dream off.

But on Monday that vision became a reality – give or take a few thousand dollars. Sinishtaj topped a field of 440 to collect $77,350 in the $1,060 Main Event of the WPT Online Borgata Series powered by partypoker US Network. He also added some nice hardware, a Hublot Big Bang E Titanium watch, valued at $5,200.

“She told me the dream a few days ago and then mentioned it again this morning when I told her I won,” says Sinishtaj, who lives in Englewood, New Jersey, and has more than $1.6 million in live tournament winnings. “I had forgotten about it because I don’t put any stock in what dreams mean.”

Maybe that’s changed now that he’s added a nice WPT Online title. Lena also played another role in his win. Sinishtaj, 39, doesn’t play too much online poker in New Jersey, maybe mixing in an occasional big tournament on Sunday. But for the most part, he considers himself more of a live player.

When the WPT Online Borgata Series was scheduled, however, Sinishtaj wanted to jump in the action and knew he’d need to concentrate. A married father of two boys ages 2 and 4, this full-time poker player made plans to head to the virtual felt in a different location.

“I ended up playing at my mom’s house because playing from home with the kids and wife around, it isn’t easy to focus,” he says. “That’s where I usually go to play. We live about 10 minutes from each other, so it works out well.”

That was certainly true on Monday. The win is just the latest big WPT score for Sinishtaj. He joined the Champions Club in Season XVI when he won the WPT Seminole Rock Poker Showdown for $661,283, the biggest live tournament score of his life. The WPT Online Borgata Series Main Event is now his largest online score.

While there have only been two WPT/partypoker US Network series in New Jersey so far, Sinishtaj adds a quirky bullet point – the only WPT Champions Club member to win a WPT online main event in the US.

Sinishtaj entered the final table second in chips with about 26 million and Kenny Huynh returned as the chip leader with 34 million. One early hand helped vault Sinishtaj to the title.

“The first big hand at the final table stands out for me,” he says. “Usually chip leaders stay out of each other’s way and chip away at the short stacks. But about five hands into it, I found myself facing a big four-bet holding

and made the call. The flop brought a King and Sinishtaj kept betting until Huynh folded on the river. The hand turned the tables and gave Sinishtaj a nice lead. Huynh went on to finish runner-up for $56,900.

“That set me up to take control of the table and I basically held the chip lead the entire time to the win,” he says. “Having the most chips definitely helped. I tried to maintain pressure on the shorter stacks and at the same time avoid doing anything stupid.”

When not playing cards, Sinishtaj enjoys spending time with his wife and kids and heading outdoors occasionally for some hiking with friends. The big win on the partypoker US Network might not have happened if he hadn’t heard about the recent upgrade to the platform.

“I really liked the software,” he says. “One of the reasons I didn’t play as much was because I hated the old software. Once I found out WPT was running on an updated version of partypoker [US Network], I had to play – and obviously very happy I did.”

While Sinishtaj’s win didn’t quite meet the prize total in his mother’s dream, he’s looking on the bright side.

“Maybe I’ll win some more soon to cover the difference.”

Sean Chaffin is a freelance writer in Crandall, Texas, and a regular contributor to WPT.com.