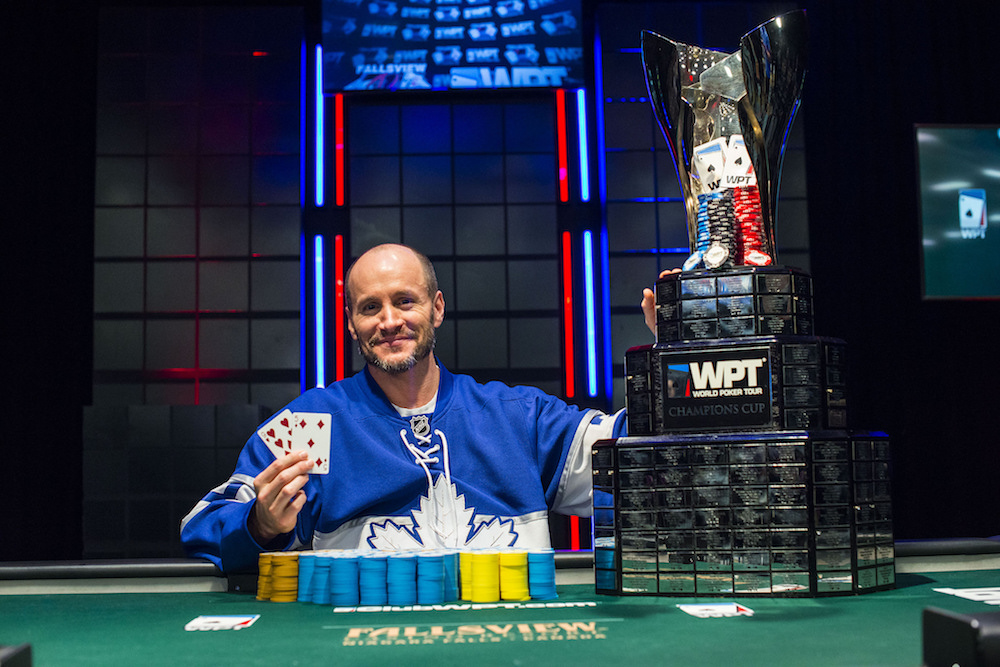 “It hasn’t sunk in yet,” Leah said after winning. “Winning a WPT has been near the top of my goal list for a long time, especially getting so close almost exactly three years ago when I lost to Anthony Zinno heads up at LAPC, so I’ve been pretty hungry to get back here again since that.”

Leah has been close before. The WPT L.A. Poker Classic he mentioned was the only prior WPT final table Leah had reached and he finished second to Zinno for $701,350.

“To do it here, where I’ve had so much success winning three tournaments already, is pretty cool,” Leah said. “So close to home, in my home country, it’s a pretty special tournament to win. I don’t think it’s fully sunk in yet.”

*Leah also earned a $15,000 seat into the season-ending WPT Tournament of Champions.

Leah entered the third and final day of play third in chips with 20 players remaining from the record-setting field of 517 entries.

On the hand he busted Eldridge to set the official WPT final table, it was Leah’s flush draw with the

for Eldridge on the

flop. The turn was the

, but the river was the

and Leah made his flush to knock out Eldridge.

Despite busting Eldridge, Leah actually entered six-handed play second in chips to Chadha. It didn’t take long for him to regain the chip lead, though, and that came when he knocked out Joe Ferrier in sixth place.

Chadha tried to keep within arm’s reach of Leah by taking out Daniel Wagner in fifth place, but the always-aggressive Leah kept his foot on the gas.

Ryan Yu would eventually take the chip lead thanks to a pot against Chadha, and then Yu busted Chadha not too long after to send Chadha home in fourth place. Yu extended his lead even more when he took out Rutherford in third place.

The heads-up match saw Yu’s 10.8 million in chips taking on Leah’s 4.715 million. The lead didn’t last long, though. Leah quickly chipped up and moved to the front before sealing the deal on the eighth hand of heads-up play.

On the final hand, Yu was eliminated with the

“I’ll cherish this one for sure,” Leah said in closing.

Leah Shoots Up Hublot WPT Player of the Year Leaderboard

Maxime Heroux, the winner of the Season XVI WPT Montreal Main Event back in November, finished 14th at Fallsview and moved to 1,075 points total. That moved Heroux to 11th place in the Hublot WPT Player of the Year race. Art Papazyan still leads, comfortably, with 2,400 points.

WPT L.A. Poker Classic Is Next

Next up for the World Poker Tour in Season XVI is the WPT L.A. Poker Classic $10,000 Championship.

Starting on February 24, 2018, and taking place for the 16th consecutive season at Commerce Casino in California is the Season XVI WPT L.A. Poker Classic $10,000 Championship. The event has one starting flight, is a freezeout format (no reentries), and first place is guaranteed at $1 million. The WPT L.A. Poker Classic $10,000 Championship will be filmed for television as part of the WPT’s Season XVI broadcast schedule.