The anticipation ahead of last night’s WPT Online Championship final was huge. An incredible standard has been achieved throughout the first Online Series, so expectations were always going to be high and it did not disappoint. The finale of the flagship event, not to mention six other trophies handed out, ensured an unforgettable evening of poker, with online crusher Christian Jeppsson the man of the night, doing what so many others had hoped (and tried) to do. 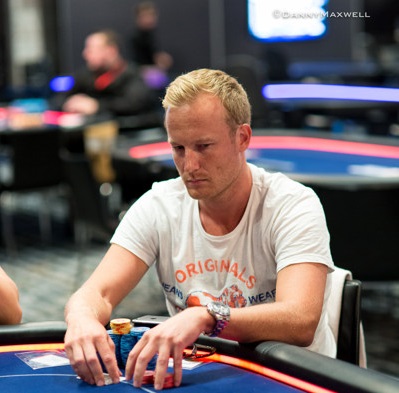 What an end to the four-day event! The final table was set and with a few short stacks, so it seemed likely that a couple of early eliminations would take place early on. That turned out not to be the case, with the first elimination taking 90 minutes to occur. There were some double ups, some big pots and plenty of viewer enjoyment before Pascal Teekens was the first to go. Coming into the table with the shortest stack he did well to survive so long but running ace-queen into Viktor Ustimov’s pocket-aces signalled the end. That left seven and a large proportion of the $6,390,000 prize pool still to play for.

Ustimov had already benefitted from winning a flip two minutes in against Sam Greenwood, and he and Jeppsson had been sharing the chip lead since then. But Jeppsson got a boost after winning a big pot against Greenwood, leaving the high stakes star in trouble. Greenwood fought hard for another hour but was unable to recover, finally succumbing in 7th place.

Another of the day’s biggest starting stacks left next, effectively turning the chip-counts leaderboard on its head, when Pascal Hartmann busted in 6th place, first winning a flip… then losing another one just ten minutes later. Alexander Clark was next to leave, and the satellite qualifier was unlucky to do so, after pulling off a trap successfully but losing with ace-queen to Ustimov’s ace-five, after he induced a jam by limping blind v blind.

Nikolay Ponomarev lost a flip against Ustimov to hit the rail in third place, giving the Russian the chip lead again. That was short-lived, as Jeppsson took it back after calling a big bluff with king-high correctly that put the Swede back in front.

Following that, it was Jukka Koskela’s turn to depart. The Finn had negotiated his short stack extremely well, surviving almost entirely by 3-betting all in from the small blind versus Ustimov’s button opens. That strategy had been extremely effective but left with nowhere to hide and down to 12bb, Koskela moved all in and ran ace-six into Ustimov’s ace-ten. He will no doubt be able to console himself with the almost half-a-million-dollar payday.

Taking a short break to discuss a deal, Jeppsson and Ustimov agreed to split the lion’s share of the money but setting aside the title, trophy and an extra $10,000 to play for. Despite a valiant effort from Ustimov, Jeppsson’s heads up game was difficult to play against, with his years of online expertise really coming to the fore throughout the 40-minute battle. In the end though, it was a cooler, when Ustimov got it all in on the turn with pocket-kings but was drawing dead to Jeppsson’s turned flush. Ustimov still has a lot to celebrate – he can put to bed the disappointing tenth-place finish he had at WPT Russia earlier this year, whilst deciding what to do with that life-changing pay-packet.

Meanwhile, Jeppsson scores almost $1 million for the result and will have his name etched on the legendary WPT Champion’s Cup, plus a seat into the $15,000 Tournament of Champions next season! A huge congratulations go to the newest member of the WPT Champion’s Club and indeed to all our finalists on their incredible achievements.

The buy-in may have been less but there was still life-changing money at stake when the final day of the WPT Super 50 got underway. The three-day event came to a head when 44 players returned all with the aim of reaching that top prize of $124,075!

Brazil’s Thiago Silva was the one to do it, turning $55 into six-figures at the end of six hours of play – we can only imagine what he must have felt like waking up this morning! Evgeniy Cherkasov came a close second and Baurzhan Akimov, Karl Erik Sandoff and Cornelis Van Gent all made the top five and Luigi D’alterio, Artem Gorbunov and Lewis Granger also found themselves a seat at the final table.

Andreas Fieldler (24th), Anthony Spinella (34th) and Scott Vener (37th) did extremely well to get so far in the mammoth field but were still some way off making a significant return on their investment.

Poker heavyweight David Peters took his first trophy of the series after notching up a final table result in the $3,200 Second Chance at the weekend. Peters began with a middling stack to see off the rest of his opponents, defeating David Gent heads up and denying Andras Nemeth his first win. The Hungarian has made quite a collection of deep runs this festival, with this finish his third final table result. 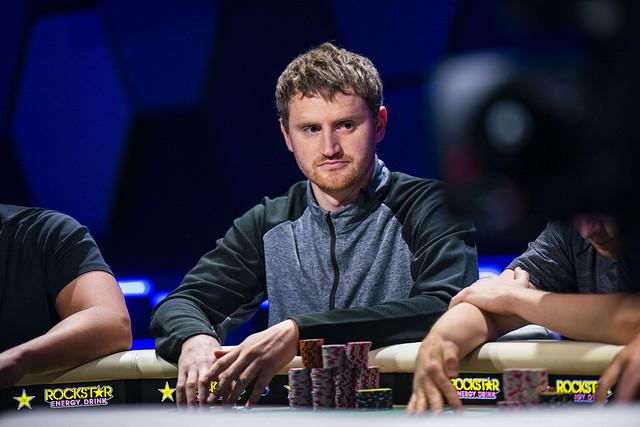 Daniil Kiselev achieved his deepest run so far, while Mark Davis added to his 5th place in the Super High Roller, bringing his total earnings in these two events to well over $200,000. Jorma Nuutinen and Fabrizio Gonzalez also managed to ladder on the final table, whereas recent $25,500 Super High Roller winner Dan Smith couldn’t spin up his extremely short stack and was first to leave.

After placing runner up in the $530 6-Max Turbo Bounty a few days ago, Alessandro Valli has gone one better, scoring himself a win in last night’s 6-Max Bounty tournament. The victory came after he successfully defeated runner up Jacob Verloop and $1,050 6-Max winner Gustavo Mastelotto, who took third place.

Pedro Garagnani and Tamás Ádámszki, who previously took down the $1,575 Superstack, rounded out the top five spots. Day 1 chip leader and poker legend Patrik Antonius busted in 6th place but managed to accrue the second biggest bounty along the way. Online pro and Mini 6-Max Weekender winner Alexandr Trofimov bubbled the final table but netted $12,851 for his result.

There were 35 players still in when play resumed in the Mini event and Dragos Trofimov started with more than double his closest rival. He converted that into a win as second chip leader for Day 1, Audrius Stakelis, took the runner up spot. 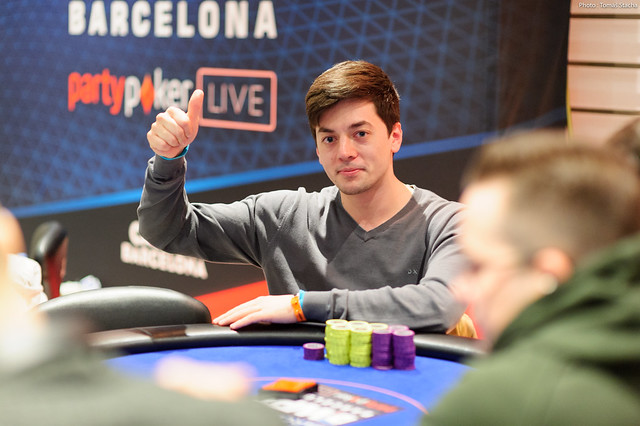 Over seven hours of play (one of the longest final days we have seen during the festival), Vlad Stefan Lache, Rusalin Dimitrov and Leonardo Mattos all secured themselves a place in the top five.

Paul Michaelis, one of the biggest names in the field, busted in 13th place, while fellow pro Sami Kelopuro (10th) missed out on a seat at the final table too.

Two one-day events were also on the menu and Christopher Oliver took down the first after defeating runner Vincenzo Lupoli.

Fabien Aguerre claimed the title after eliminating runner up Granit Berisha, calling time on the event that lasted more than five hours, with Oleg Nemchenko, Luiz Flosi Prospero, Fabio Maritan Pereira and Maxine Williams making it to the final six as well.

Two tournaments got underway last night and will conclude this evening. A total of 290 players descended on the 8-Max and there were some huge names in the running, some of which made it through.

Brock Wilson (1,189,920) takes through the chip lead and Enrico Camosci (1,032,765) was the only other player to break through the one-million-chip ceiling. Hossein Ensan, Richard Dubini and Aram Zobian feature in the top ten stacks too and return with at least $3,990 in their pockets but could win up to $59,700 for the win. Ian O’hara is another well-known player still in the running, albeit near the bottom of the counts.

Day 1s in both the WPTDS and the Mini WPTDS events will run each day until Tuesday, May 26, and yesterday it was time for Day 1c.

Once again, players had to survive four-and-a-half hours in order to bag a seat in Day 2. At the end of it, 208 players had been reduced to 24, and it was none other than Mexico’s Fabrizio Gonzalez (649,391) who had chipped up the most by the end of Level 18, a clear margin ahead of Dimitrios Farmakoulis (481,282) in second.

A total of 677 entries were counted in the WPTDS Mini and of those, 79 progressed to Day 2. Roman Matveichuk (708,595), Luis Vasconcelos (702,810) and Nelson Resendiz (596,612) built the biggest stack, while some notables also took a stab, with Jake Schwartz, Gianluca Speranza, Marvin Rettenmaier, Matt Staples, Chris Brammer and Daniel Strelitz all returning next week for round two. 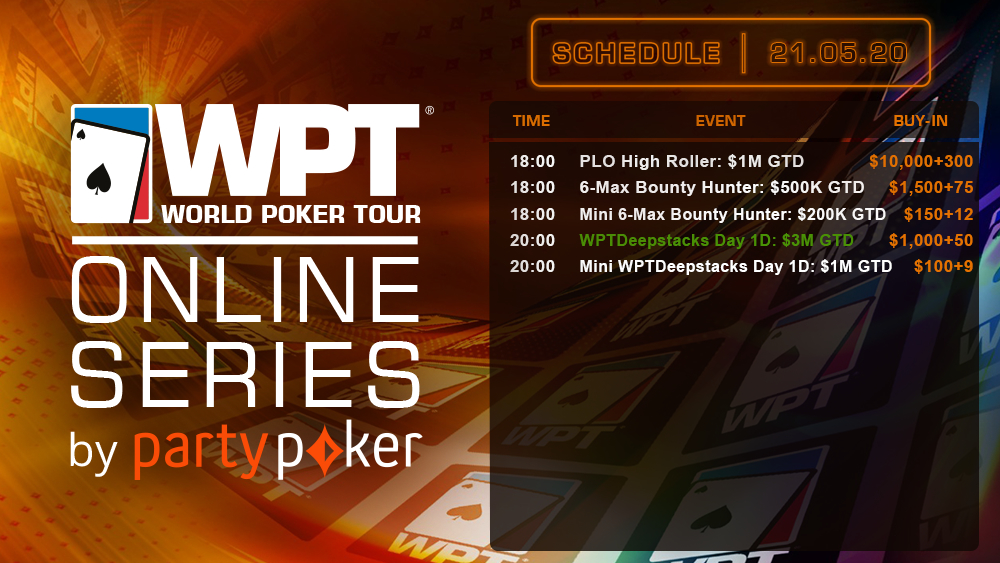 If you are feeling the post WPT Online Championship blues, have no fear! There are plenty more fantastic tournaments to get your teeth stuck into as the $10,300 PLO High Roller, $1,575 6-Max Bounty Hunter, $162 Mini 6-Max Bounty Hunter, plus Day 1d of the WPTDS and Mini WPTDS are all on the schedule for today! 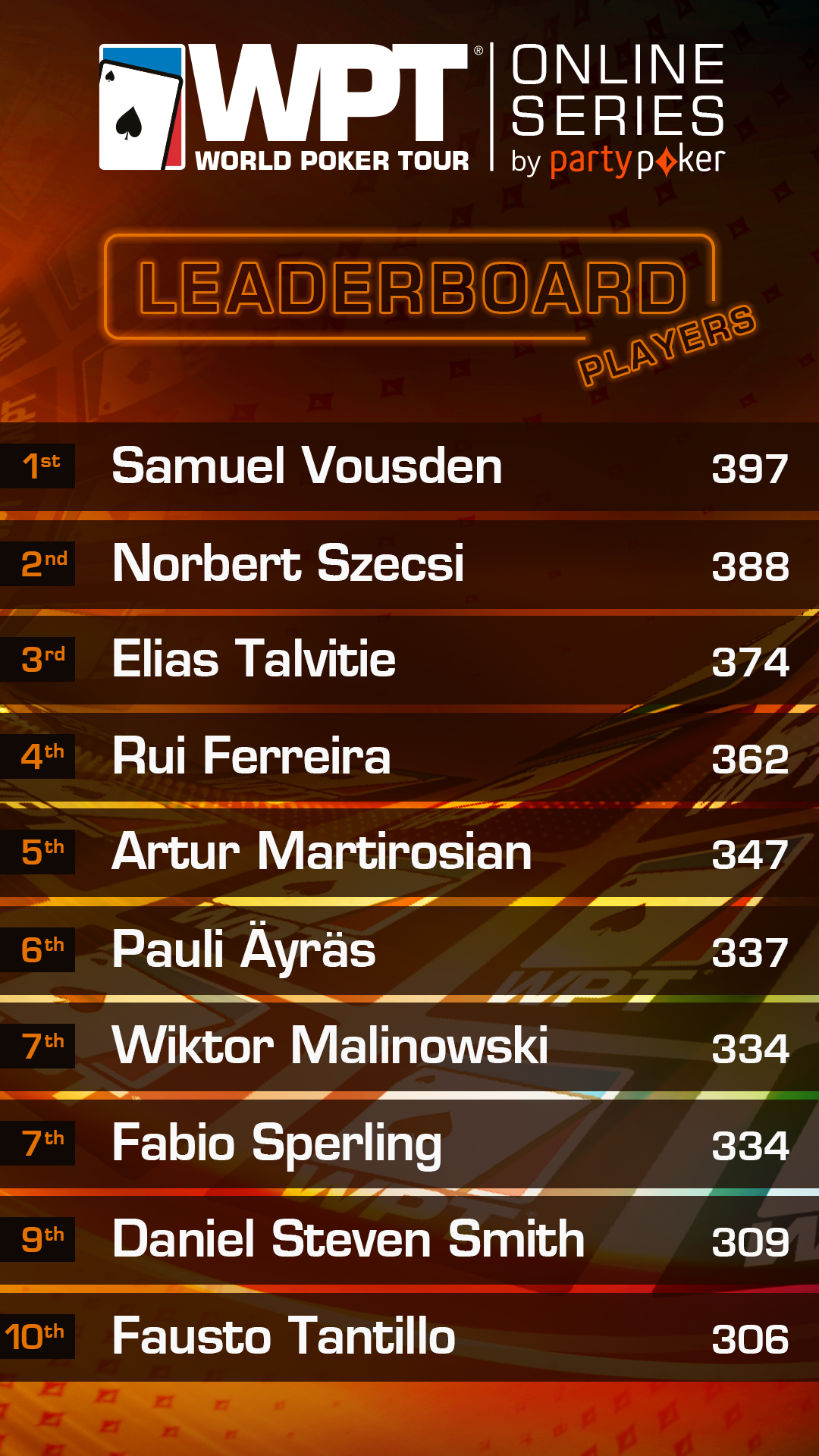 There is no change at the top, as Samuel Vousden, Norbert Szecsi, Elias Talvitie, Rui Ferreira and Artur Martirosian still hold on to their top-five spots on the Leaderboard.