Two more winners were crowned last night as the $1,050 Mix-Max Turbo and $109 Mini Mix-Max Turbo events both played out. The higher buy-in event in particular saw many big names pull up a virtual chair and most of those who reached the money stages were well-known players. In addition, the $1,575 PLO HI-LO and $162 Mini PLO HI-LO events got started, not to mention the $2,100 6-Max Weekender and it’s $215 Mini counterpart also continuing.

The other big news is, of course, that the $3,200 Online Championship resumes this evening as Day 1b takes place! The first flight on Sunday was extremely popular and we expect this one to be no different when the action kicks-off at 6 pm.*

There were big names aplenty to contend, with but Stewart Kirby didn’t let that stand in the way of an Online Series’ trophy, as he saw off some tough opponents in the final stages of the Mix-Max Turbo last night.

Going back to the start and 151 entries created $151,000 for the prizepool, with 18 places paid. Alex Foxen, Niklas Åstedt, Igor Kurganov, Ryan Riess, Martin Jacobson, and partypoker representatives Roberto Romanello, Jeff Gross, Ludovic Geilich and Dzmitry Urbanovich were all among the casualties, with many taking advantage of the one re-entry option too.

That was also true of many of the final tablists, with eventual winner Kirby, runner-up Steven Van Zadelhoff and fourth-place finisher László Molnár all doubling down on their investment and then reaping the rewards of their decision to do so. 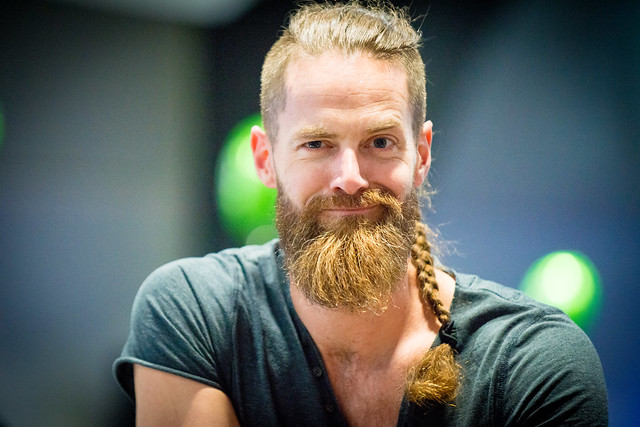 Team partypoker Patrick Leonard, Tom Middleton and Chris Brammer, who along with Kirby all flew the flag for the United Kingdom, also had fantastic runs that took them all the way to the final table, with Alexandre Reard (9th), Christian Rudolph (15th), Juha Helppi (17th) and Robert Heidorn (18th) making it to the money stages as well.

The Mini Mix-Max got underway at the same time and 946 entries were logged. It took almost five-and-a-half hours to play down to a winner but in the end, it was Brazil’s Gabriel Schroeder who went the distance after eliminating Ivan Zhechev, the last player standing in his way of the trophy.

Dario Marinelli, Nicholas Romanello, Wayne Parsons and Stefan Ivanov also made the final table, denying Steven Goosen (7th) and Dimitar Danchev (8th) a place. Meanwhile, Stuart Menzies – who won the $530 6-Max Hyper the previous day – came in 16th, whilst Steven Van Zadelhoff made it back-to-back cashes after getting as far as 19th place.

Next up it was time for the PLO HI-LO events to begin. The higher buy-in tournament got started at 7 pm and over the course of 20 levels, the field was reduced to just 11. All those remaining will return tonight to challenge for the title and a very attractive $50,382 cash for the winner. 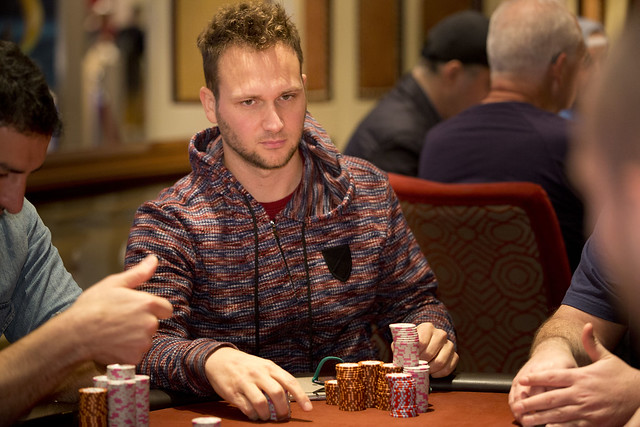 Fellow Online Series title-holder Anthony Zinno also made it to the final day, with the $1,050 Heads Up winner returning one of the shorter stacks among the 19 players left who return tomorrow to vie for the $9,400 top prize.

A whole host of recognisable names entered Day 1b of the $2,100 6-Max Weekender and many of them had chipped by the time the clock was paused at the end of Level 18.

Both tournaments have their third and final starting flight today, when Day 1c Turbo gets underway at 3:30 pm. Then the final day commences at 7pm tonight.

There are just a handful of WPTSuper50 Day 1 events left, with two today (at 3 pm and 8pm), one tomorrow (8pm) and two on Tuesday (2 pm and 5pm), with the second a turbo offering ahead of Day 2 which begins at 8 pm that night. Then the grand final is the following day at 8 pm on Wednesday, May 20. 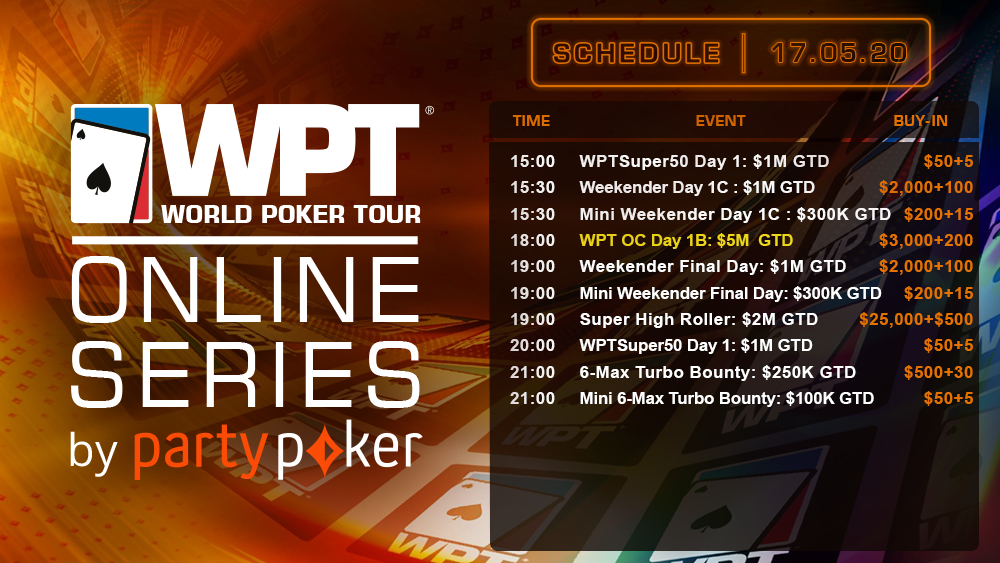 The WPT Online Championship continues with Day 1b of the $3,200 event getting underway at 6 pm tonight. Satellites are running now, so don’t miss out on your chance to play this $5,000,000 guaranteed event!

As if that wasn’t exciting enough, there will also be the third Super High Roller of the series, with the $25,500 event starting at 7 pm and offering a cool $2,000,000 guarantee of its own! 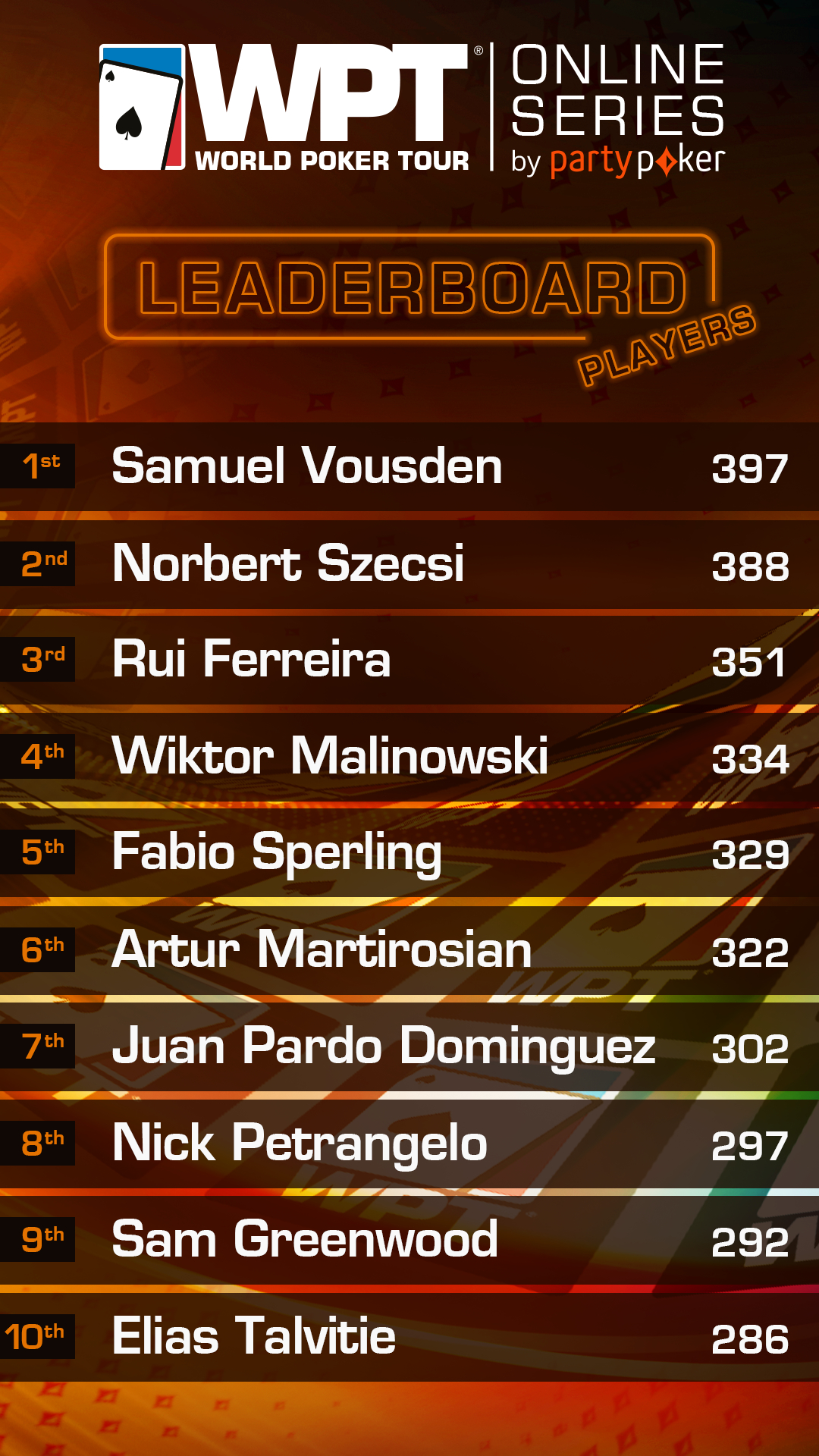 Serial final tablist Samuel Vousden has moved up into top spot, proving that numerous deep runs make all the difference in this Leaderboard race. Norbert Szecsi, Rui Ferreira, Wiktor Malinowski and Fabio Sperling, make up the remainder of the top five.